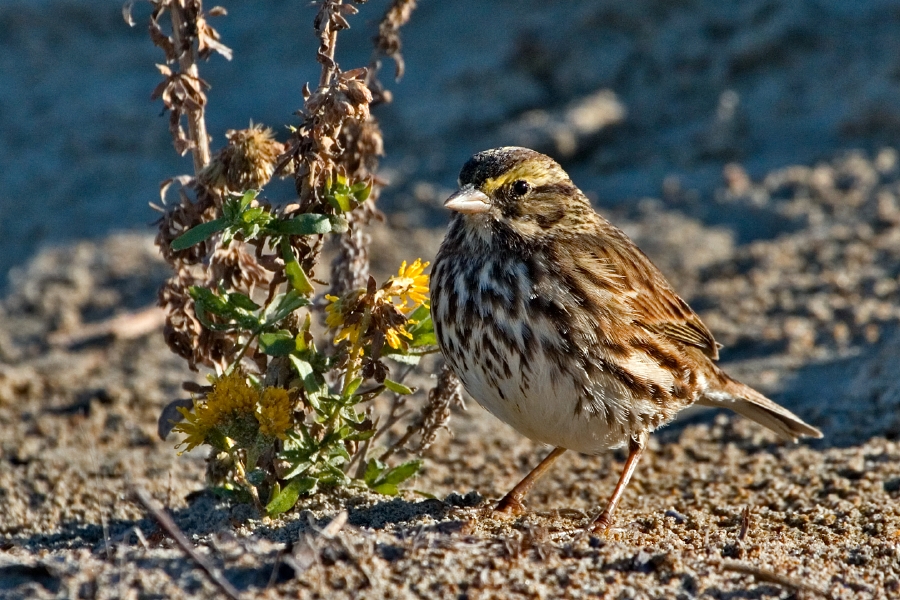 It is named after where one of the first specimens of this bird was collected.

This breeds in , , northern, central and Pacific coastal , and . The Pacific and Mexican breeders are resident, but other populations are migratory, wintering from the southern United States to northern . It is a very rare vagrant to western .

This species has a typically sparrow-like dark-streaked brown back, and whitish underparts with brown or blackish breast and flank streaking. It has a yellowish or whitish crown and eyebrow stripes. The cheeks are brown and the throat white.

The Savannah Sparrow is a very variable species, with numerous , several of which have been split as separate species at various times. The different forms vary principally in the darkness of the plumage, with Alaskan and interior races the palest, and southwestern coastal forms the darkest; by and large ths agrees with the new species limits. The Savannah Sparrows proper (see below) are very similar and migrant birds can not usually be related to a breeding population with certainty. The resident or partially migratory subspecies are well distinguishable by size and, particularly between groups, coloration. The song is mixture of "chirps" and trills. The flight call is a thin "seep".

These birds forage on the ground or in low bushes. They mainly eat seeds, but insects are also eaten in the breeding season. They form flocks in the winter to migrate.

Seventeen subspecies (including the Large-billed Sparrows) are currently recognized. Four additional subspecies are not generally accepted. The subspecies are usually divided into several groups:

"P. s. wetmorei" is a doubtful subspecies which may breed in the mountains of Guatemala. It is known from only 5 specimens, collected June 11-17, 1897, in .Fact|date=February 2007

The San Benito (Savannah/Large-billed) Sparrow is a resident bird of the off Baja California; a stray bird was observed on on April 21, 1906 [Thayer & Bangs (1907)]
* "P. r. sanctorum" (or "P. s. sanctorum"):This is a large-bodied and large-billed subspecies, similar to "rostratus". They utilize different habitat and their breeding season does not seem to coincide with that of Belding's Sparrows [For late April 1906, Thayer & Bangs (1907) report nestlings, young birds molting into adult plumage, but no eggs anymore. Rising "in" Zink "et al." (2005) found no breeding activity in late April 1999. Consequently, breeding seems to take place in the winter months, with the last young fledging in April/May.] . However, their bill size is due to and their habitat choice simply to the lack of alternatives on their barren island home; altogether, it appears to be a fairly recent offshoot from the Belding's Sparrows group. It appears as distinct arily from these as does the Ipswich Sparrow from the Savannah Sparrow proper group, only that there seems to have been more and/or a larger in the case of the latter.