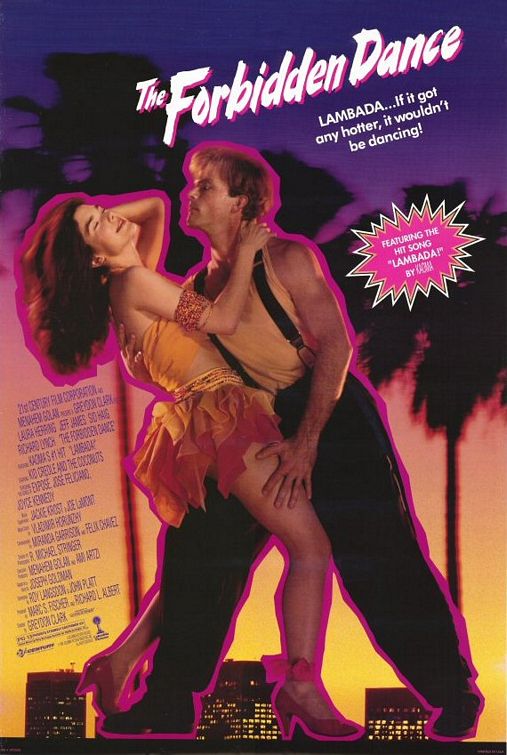 The film was written, produced, and released very quickly in order to cash in on what some thought was a . The script was commissioned in December 1989, written in ten days, and filming began within a month. The film also featured the song "Lambada", performed by the group , which helped spread the Lambada craze the previous year. It was released on 1990, the same day as rival film "Lambada" &ndash; whose producers sued to keep the word "Lambada" out of the title.

The film was panned by critics, and received little attention in the theatres. "The Forbidden Dance" is B-movie drab, and its dance sequences are barely sexier than a bowling tournament," [cite news|title=And Now on the Screen: Lambada!|publisher=|first=Jon|last=Pareles|date=1990-03-18|accessdate=2007-04-08|url=http://movies2.nytimes.com/mem/movies/review.html?_r=1&title1=&title2=LAMBADA%20%28MOVIE%29&reviewer=JON%20PARELES&v_id=18159&pdate=19900318] said one critic. "Heavy-handed and somewhat mean-spirited, "The Forbidden Dance" is a slapdash message movie, about as subtle as a clog dance," said another. [cite news|title=‘Lambada’ (PG-13) and ‘The Forbidden Dance’ (PG-13)|publisher=|last=Kempley|first=Rita|date=1990-03-17|accessdate=2007-04-08|url=http://www.washingtonpost.com/wp-srv/style/longterm/movies/videos/lambadapg13andtheforbiddendancepg13kempley_a0a000.htm]

Generally, "The Forbidden Dance" is considered the weaker of the two movies, though both were not very well received.

Nisa () is the princess of a Brazilian tribe who comes to Los Angeles to stop an American corporation from destroying her rainforest home. With her is tribal shaman Joa (), who uses black magic to get past the company guards and see the chairman of the corporation, resulting in his arrest.

Left to fend for herself in L.A alone, Nisa, with the help of Carmen (), finds work in a mansion as the servant of an an uptight couple whose son, Jason (), lives only to dance. After spying on Nisa as she dances provocatively in her bedroom, Jason takes her out to a club. She is rejected by Jason's friends, and he is berated by his parents for dating the help.

Nisa runs away and gets a job at Xtasy, a sleazy dance joint/brothel, as a dance partner for male customers. Jason visits the club with his friends, but Nisa rebuffs him. He becomes morose, turns away from his buddies and girlfriend Ashley () and returns to Xtasy to try to take Nisa out of the place. A bouncer beats up the would-be rescuer and prepares to deflower Nisa, but fortunately Joa walks in and magically stuns the attacker, which clears the place.

The shaman then heads back to the tribe, while Nisa and Jason, now in love, prepare for a dance contest, hoping to speak out about the plight of the rainforest when they are showcased on TV.

They win the contest, but the corporation's head stooge, Benjamin Maxwell (), kidnaps Nisa afterwards. Jason finds them and helps Nisa to escape, but twists his ankle, ruining their chances of performing on the TV show.

Luckily, Joa shows up backstage, heals Jason's wound, and the dance goes ahead as planned. The crowd loves them, they start a boycott against the destruction of the rainforest, and everyone gets into the lambada.