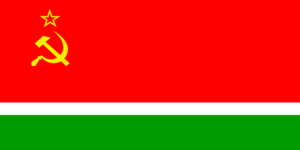 The Lithuanian Soviet Socialist Republic ( _lt. Lietuvos Tarybų Socialistinė Respublika; _ru. Литовская Советская Социалистическая Республика "Litovskaya Sovetskaya Sotsalisticheskaya Respublika"), also known as the Lithuanian SSR for short, was one of the republics that made up the former . It was established after Soviet Occupation of in 1940 and existed to 1990 (although there was a failed attempt to establish government in Lithuania by Bolshevik military force in 1918-1919).

The Lithuanian SSR was first proclaimed on , , by the provisional revolutionary government of Lithuania, formed entirely by the . Lithuanian SSR was supported by Soviet armed forces, but it failed to create a "de facto" government with any popular support, contrary to the . Two months later on , , it was joined by the to form the (LBSSR or Litbel), which existed for only six months, until , . officially recognized the by signing the on , . It has been suggested that losing the prevented the Soviets from invading Lithuania and re-establishing a Soviet republic.

Later, the of (August 1939), between and the Soviet Union, stated that Lithuania was to be included into the German "sphere of influence", but after the broke out in September 1939 was amended to transfer Lithuania to the Soviet sphere in exchange for and parts of the province of , originally ascribed to the , but by that time already occupied by German forces. The Lithuanian Soviet Socialist Republic was established on (after communist rule was forced upon Lithuania following the Soviet invasion of ). On , , a communist government, which had been hastily formed, announced that the Lithuanian SSR would become a part of the Soviet Union, i.e. the 14th constituent republic of the USSR. Its territory was subsequently invaded and occupied by Nazi Germany in 1941, but with the German reverse of its military fortunes and eventual retreat, Soviet rule was re-established there in July 1944.

The , , and other western powers considered the occupation of Lithuania by the USSR illegal, citing the , in 1940, but recognized all borders of the USSR at post-World War II conferences. In spite of this, the United States refused to recognize the annexation of Lithuania or the other , by the Soviet Union, at any time of the existence of the USSR.

In addition to the human and material losses suffered due to war, several waves of deportations affected Lithuania. During the mass deportation campaign of June 14-18, 1941, about 12,600 people were deported to without investigation or trial, 3,600 people were imprisoned, and more than 1,000 were killed.

The Lithuanian SSR was renamed the Republic of Lithuania again, and on , , all legal ties of were cut with the Soviet Union as Lithuania declared the restitution of its independence. The government of the USSR recognised Lithuania's independence on , .

In comparison with other parts of the USSR its economy fared better and today Lithuania remains one of the wealthiest of the formerly Soviet-controlled statesFact|date=June 2007.

The economy in Lithuania was relatively good. During Stalin's purges starvation was relatively low. Most people had food and water, and many people were able to obtain economic prosperity. The average standard of living was high.

There was economic downturn when Khrushchev came to power and instigated his reforms. Lithuania faced economic downturn unseen anywhere else in the Soviet Union. However the Lithuanians still fared quite well. They were untied, leading to their relative prosperity now. They were the first nation to leave the USSR and during occupation were the nation which had the largest amount of youth resistance groups and largest number of strikes. [The Baltic States: Estonia, Latvia and Lithuania by David James Smith P. 145]

A discovered in 1975 by a Soviet astronomer is named after the Lithuanian Soviet Socialist Republic. [ [http://books.google.com/books?q=%222577+Litva%22 Dictionary of Minor Planet Names - p. 210] ]