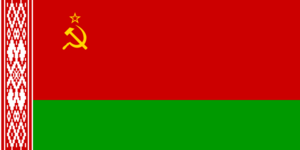 The Byelorussian Soviet Socialist Republic (abbreviated as Byelorussian SSR or BSSR) ( _be. Беларуская Савецкая Сацыялістычная Рэспубліка [БССР] "Belaruskaya Savetskaya Satsyyalistychanaya Respublika [BSSR] "; _ru. Белору́сская Сове́тская Социалисти́ческая Респу́блика [БССР] "Belorusskaya Sovetskaya Sotsalisticheskaya Respublika [BSSR] ") was one of fifteen constituent republics of the . It was one of the four original founding members of the in 1922, together with the Ukrainian SSR, the and the Russian SFSR. The Soviet Republic, along with the Ukrainian SSR and the Soviet Union, were founder members of the in 1945.

The Soviet republic, , in the lands of Belarus was declared on 1 January 1919, but it took a few years to define its status. Byelorussia was also one of several Soviet Republics occupied by Nazi Germany during . The end of the Soviet Republic occurred in 1991 and the county was later renamed into the current Republic of Belarus.

Being part of the before , Belarus declared its first statehood on 25 March 1918, forming the . The Republic was, however, short-lived, and was overthrown soon after the German withdrawal. On 1 January 1919 the (SSRB) was created. Soon it was disbanded, its territory merged into the RSFSR and the new . The latter one was also short-lived, overridden by the 1919 Polish invasion. After ended in 1921, Byelorussian lands were split between Poland, Russia, and the recreated SSRB [In the term "SSRB" was suppressed, but there is documentary evidence of the usage of the term SSRB rather than BSSR, see, e.g., [http://zakon2006.by.ru/part28/doc37855.shtm A 1992 cancellation of a 1921 SSRB laws] ] , which became a founding member of the in 1922 and became known as BSSR.

Polish Autonomous District Dzierzynszczyzna was created within BSSR in 1932 and disbanded in 1935.

In September 1939, the annexed the Polish-held during the 1939 invasion of Poland and incorporated it into the BSSR. Part of it was later transferred to the Lithuanian SSR.

After , the Byelorussian SSR was given a seat in the General Assembly together with the Soviet Union and Ukrainian SSR, becoming one of the founding members of the UN.

Following the , the Supreme Soviet of Belarus declared independence from the Soviet Union on 25 August 1991. The republic was renamed the "" on . On 8 December 1991 it was a signatory, along with and , of the , which replaced the Soviet Union with the .

According to the 1959 Soviet Census, the population of the republic were made up as follows:

The largest cities were:

* [http://www.archive.org/details/ByelorussiaSpeedingTowardsAbundance "Byelorussia : speeding towards abundance"] by