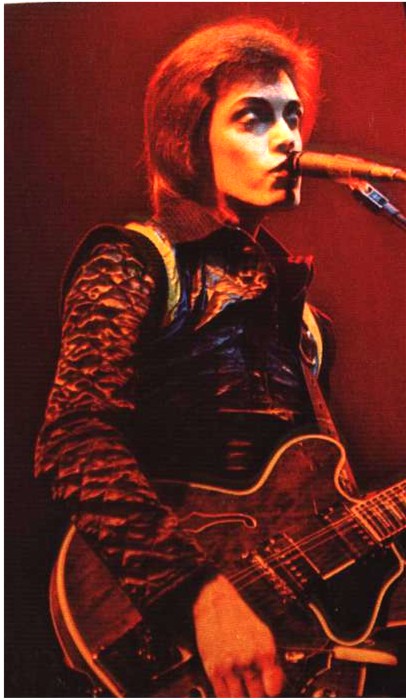 Bill Nelson (born William Nelson, ) is a prolific , , painter and experimental from , , . He currently lives in .

Born to Walter, a musician, he also had a brother who also dedicated to music: Ian (1956-2006), who collaborated in the song "Ships In The Night" and formed the band Fiat Lux.

Nelson was educated at the Wakefield College of Art, where he developed an interest in the work of and , . At this time he was also developing as a musician, drawing upon as a primary influence.

His first recording was a brief contribution on an entitled "" with Chris Coombs, Brian Calvert and Mike Levon. Levon recorded and produced the album "A-Austr: Musics from Holyground" which appeared on in 1970. After that Nelson appeared in a much more substantial role with "Lightyears Away" on the Holyground album "Astral Navigations" released in 1971. One track from this also gave Nelson his first by : "Yesterday" by Lightyears Away, written by Coombs, where Nelson's lead guitars were recorded by Levon in an style, supporting Coombs' riff. After this, Nelson's solo album was recorded and co-produced by Levon at Holyground, also in 1971.

Nelson's debut solo album was named "Northern Dream" and drew more attention from John Peel on his national programme in the , and this eventually led to Nelson's band signing to . The band's first recordings were also made at Holyground. (All of the Nelson recordings made there were released in February 2001 by Holyground on a CD called "Electrotype".) Shortly after this Be Bop Deluxe were signed to EMI, releasing "Axe Victim". On stage, the band developed a reputation built upon Nelson's electric guitar stylings, which have been described as "".Fact|date=December 2007

After the breakup of , Nelson attempted another band project called Red Noise (releasing the seminal "Sound on Sound" album), but eventually settled into a career as a solo musician, recording albums in the early vein such as "The Love That Whirls" and "Quit Dreaming and Get On the Beam". Many of these albums also shipped with bonus records featuring experimental ambient s, and this was a genre of music Nelson would embrace more fully in the future. For a period between the late 1970s and early 1980s, Nelson self-produced on his Cocteau label a bewildering plethora of releases, mostly cassettes and vinyl, consisting of solo synthesizer and keyboard instrumental pieces. Later released on the short-lived Enigma label, the complete range of material was inconsistent (some tracks sounding like little more than just the barest bones of a melodic sketch or repeating tonal figure). Perhaps the finest expression of this period of Nelson's music can be found on the release, "Chance Encounters in the Garden of Lights" (see below), an evocative and mysterious collection of solo synthesizer and keyboard works, packaged with album graphics of an occult nature.Fact|date=December 2007

In mid 1980 Nelson released "Do You Dream In Colour?", and after airplay on BBC Radio 1, especially by John Peel, the single climbed to a modest number 52 in the .

A notable contribution to the work of another electronically oriented artist, , occurred in 1983 when Numan, an admirer of Be Bop Deluxe, began to co-produce his "Warriors" album with the veteran artist. In spite of a difference of opinions and a general falling out (which led Numan to remix the co-produced version of the album &mdash; hence the lack of a production credit), Nelson's dream-like guitar work adds to the album's ambiguous, warm and distinctly jazzy feel.Fact|date=December 2007 He also contributed towards several tracks on David Sylvian's- 'Gone to Earth'(1986)

Nelson had bad luck with major labels in the 1980s. A deal with went sour, leaving one album, "Getting the Holy Ghost Across" (U.S. title: "On a Blue Wing"). Nelson and his manager Mark Rye had formed the Cocteau Records label in 1981, and for many years this label handled the majority of Nelson's output, which often included multiple albums per year. Among the more ambitious Cocteau releases were the four-record boxed set of experimental electronic music, "Trial by Intimacy (The Book of Splendours)", and the later ambient collection, "Chance Encounters in the Garden of Lights", which contained music informed by Nelson's Gnostic beliefs. In the late 1980s, Nelson signed to the U.S. label , and though they re-released his entire Cocteau catalogue, the label soon went out of business.

As the 1980s ended, Nelson suffered a series of personal setbacks, including a divorce, tax problems, and an acrimonious dispute with his manager over his back catalogue rights. In the case of one album, the unreleased "Simplex", his manager had been selling copies via mail order without Nelson's authorisation; Nelson claims he never received any royalties from these sales. [http://www.ucc.ie/law/restitution/archive/englcases/nelson.htm link Nelson vs. Rye]

Nelson channelled his troubles into his music, with the result that the 1990s proved an even more prolific period for him. His divorce inspired a 4-CD boxed set, "Demonstrations of Affection", and he worked on some guitar-based instrumental projects such as the albums "Crimsworth" and "Practically Wired, or How I Became Guitar Boy". With "Demonstrations", Nelson perfected a songwriting ethic based on the immediacy of creative inspiration; each song was recorded almost as soon as it was written, taking only an average of two hours to complete. This technique enabled Nelson to produce a staggering amount of new music into the new century, which resulted in such large-scale releases as the 4-CD set "My Secret Studio" and the 6-CD set "Noise Candy".Fact|date=December 2007

In 1996, Nelson's troubles with his former manager were resolved in a lawsuit which enabled Nelson to recover much of his back catalogue. A fully authorized version of the "Simplex" album was released in 2001.

In the late 1990s, Nelson created the Populuxe Records label, with a distribution arrangement with 's , but the relationship with DGM has stagnated and Nelson's last DGM release was "Atom Shop" in 1998. Subsequent releases have been on other imprints such as Toneswoon and Voiceprint as well as direct mail-order releases.

By 2006, Universal Music (UK) re-issued three Mercury albums on CD - "Quit Dreaming and Get on the Beam", "The Love that Whirls", and "Chimera" all have been remastered, and released with bonus tracks. The lone CBS album, "Getting the Holy Ghost Across/On a Blue Wing", has also been issued on CD, with all the original tracks and extras on Nelson's Sonoluxe imprint.