Machinae Supremacy is a Swedish band that combines modern heavy metal and alternative rock with chiptunes. Self-defined as "SID metal", many of their songs use a SidStation that features the SID chip of the Commodore 64. They have released a considerable number of songs for free download on their site, 32 original recordings, with approximately 100,000 downloads a month.[1][2]

Deus Ex Machinae, the band's first commercial album was released in 2004 through the independent (and now defunct) MbD Records UK. The band is currently signed to Spinefarm Records, through which they released their second studio album, Redeemer in 2006, followed by Overworld in 2008 and A View from the End of the World in 2010.

Machinae Supremacy was formed in Luleå, Sweden during the summer of 2000 by Robert Stjärnström, Kahl Hellmer and Jonas Rörling. The name of the band had existed before this, but it was only a few months later the band decided a specific style they wanted to pursue. Andreas Gerdin, a long time friend of Rörling, joined on keyboards and Tobbe joined on drums. Together they recorded their first song, "Cryosleep."[3]

Defining an original style and being fans of the Commodore 64, they settled on using the SID chip from the machine in their music, later becoming known by the term "SID metal". They described their music as carrying a vibe of self-confidence, enlightenment and encouragement for people to take control of their own lives.[4][5]

The band saw the Internet as the best way to reach a wider audience, forgoing the traditional method of sending demos to record labels. In 2001 their official website was launched, boasting around nine freely available songs. They distributed their music through the free Vorbis audio codec as well as MP3.

The band attempted to reach out to the Commodore 64 community in an attempt to gain a larger fan base. It was during this time "The Great Gianna Sisters" was released, a cover of the theme to Great Giana Sisters composed by Chris Hülsbeck. Releasing this song onto various Commodore 64 remix sites proved to be instrumental in granting the band's early success,[6] which was later increased by the follow-up, the Sidology series. Machinae Supremacy would also go on to perform their first show abroad, at a nightclub in Soho during the Back in Time Live event.

During 2001, Stjärnström and Hellmer, together with friend Tomi Tauriainen formed the short-lived punk rock side-project, FLAK.[7] Intending to express a political side,[8] only three songs were released; parts of which would later go on to influence Machinae Supremacy songs.[9] From an interview with Stjärnström "FLAK is... aggression and pain! :] It's a band, but it's nothing serious, just a means of expression."[8]

In 2002, Tobbe left the band and was replaced by Tomas Nilsén, who is a long time friend (and previous band mate in Garden Of Concrete[5]) of Stjärnström's. Over the next few years, they released 25 freely downloadable songs before they began work on their first studio album.

In May 2004, the band announced the release of their first commercial album Deus Ex Machinae through Music By Design Records Ltd. (MbD).[10] The album's first print of 1000 copies sold out within a year, leading to a second print being released in 2005.[11] Shortly after the release of reprint of Deus Ex Machinae, MbD ceased trading and the band were without a record label for the then-in-development second album. This album would not be released until 2006.

The band would also contribute to other projects that year; they worked on the soundtrack for the video game Jets'n'Guns by RakeInGrass software. The Jets'n'Guns Soundtrack was released for free on December 2004. In that year three of their songs were included in the In the Groove series of dancing games; "Hybrid", "Bouff" and "Cryosleep".

During 2005, the band's focus was directed towards finishing and finding a way to release their second album. "Ghost (Beneath The Surface)" was released, as an outtake from the album, and was very well received. They collaborated with the German gaming magazine GameStar to produce and release two songs, "Loot Burn Rape Kill Repeat" on 25 June for a World of Warcraft special, and "Multiball" (a medley of themes from the Pinball Dreams series) on 20 November for a Battlefield 2 special.

Later that year, Hellmer moved away from Luleå and could no longer take part in the band. He was replaced by Johan Palovaara.

Early in 2006, on 9 January, the band was able to release "Sidology Episode II – Trinity", finally completing their "Sidology" series, as well as announce a sister production company Hubnester Industries, which would handle future soundtrack and commissioned work.[12]

On 18 March of that year they were able to independently release their second commercial album, Redeemer through their own merchandise web site and store using Hubnester Industries as their own record label.[13] Then on 27 September that year it was announced they had signed to Spinefarm Records[14] in a 4 album record deal and would remaster and re-release Redeemer to retail on 8 November.

In late 2006 the band, with Hubnester Industries, worked on the soundtrack to the now postponed PC game War Angels,[15] developed by Moonpod, and their third studio album.[16][17] On 27 November 2006, the band's lineup was changed with the hope of improving the quality of live performances, with Stjärnström's guitar role passing on to Gerdin, allowing Stjärnström to focus solely on vocals, and replacing the keyboard with pre-recorded samples.[18]

In 2007, it was confirmed that the band would produce their first music video for the song "Through The Looking Glass".[19] It was directed by Tomi Tauriainen, and shot by Torbjörn Lindbäck and was released after several delays later that year.[20][21] 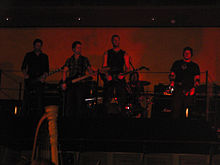 Performing at Play! A Video Game Symphony in Stockholm

It was during this year that the band were asked to perform with the Royal Stockholm Philharmonic Orchestra during the Play! A Video Game Symphony concert in Stockholm, part of the world-tour event featuring music from video games. They played during the song "Dancing Mad" from Final Fantasy VI.[22][23] Following the success of this concert, they were asked to return to the event in Oslo, Norway with the Norwegian Radio Orchestra and the Oslo Philharmonic Choir where they played, among other songs, Metallica's "One" during a Guitar Hero segment.[24]

On 9 October, shortly after the band released their first music video for the song "Through the Looking Glass", it was announced that Johan Palovaara was leaving the band, "Due to different priorities, Johan Palovaara is now leaving the band to pursue other ambitions."[25] It was later revealed it was over the band's decision to perform at events such as Play!.[5] Johan Hedlund was hired as the band's new bassist.[25]

Production began on the third album, Overworld during 2007. The first radio single from the new album, a cover of Britney Spears' "Gimme More", was premiered on the Finnish station YleX in late November.[26]

The album was released on 13 February 2008. Later in the year after a web site redesign the Vorbis audio files were replaced with lossless FLAC files. In October the band released a cover of the title theme from the 1988 video game Bionic Commando for the game's sequel.[27]

The band released their fourth studio album, A View from the End of the World, on 3 November 2010. The video for the song "Force Feedback" was later released in 2011.[30]

In early 2011 the band toured Europe supporting Children of Bodom on their Ugly World Tour.[31] A UK-only best of compilation, The Beat of Our Decay, was released on 28 March 2011 to support the tour.[30] After four years of membership, Hedlund left the band on 19 June 2011. The band did not release an official statement regarding his reasons.

On 14 October 2011, Machinae Supremacy released a full-length concert video Live at Assembly Summer 2011 as a free of charge Internet-only torrent download through The Pirate Bay. It was recorded at the 2011 Assembly Summer demoparty in Hartwall Areena, Helsinki.[32]

Promotional tracks are released as free downloads on the band's website. Listed by year originally released.