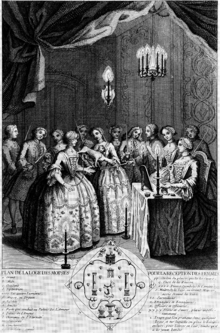 The Order of the Pug was a para-Masonic society founded by Roman Catholics. It is believed that it was founded in 1740 by Klemens August of Bavaria to bypass the papal bull Eminenti Apostolatus Specula of 1738. The constitution of the Order of the Pug allowed women to become members, as long as they were Catholic. The pug was chosen as a symbol of loyalty, trustworthiness and steadiness.

Members called themselves Pugs, novices were initiated wearing a dog collar and had to scratch at the door to get in. The novices were blindfolded and led around a carpet with symbols on it nine times while the Pugs of the Order barked loudly to test the steadiness of the newcomers. During the initiation, the novices also had to kiss a Pug's (porcelain) backside under its tail as an expression of total devotion. Members of the Order carried a Pug medallion made of silver.

In 1745, a disclosure script was published in Amsterdam with the title L'ordre des Franc-Maçons trahi et le Secret des Mopses révélé which included the ritual and two graphics. The Order was forbidden in Göttingen in 1748.