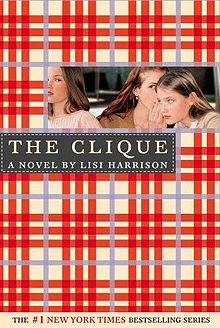 Cover of The Clique, the first novel of the series, released on May 5, 2004

The Clique is an American young adult novel series written by Lisi Harrison and was originally published by Little, Brown and Company, a subsidiary of the Hachette Group, but got reprinted by Poppy books. The series revolves around four girls. Massie Block, Alicia Rivera, Dylan Marvil, and Kristen Gregory collectively make up The Pretty Committee, an 'A-Lister' clique at the fictional, all girls middle school, Octavian Country Day, or as Massie likes to call it, OCD. Claire Lyons is a misfit girl from Orlando, Florida. She shops at stores like Wal-mart and Target and has no clue what life in Westchester is like and what is expected of her there. Massie is the head of the clique, dressed in Juicy Couture, Louis Vuitton, Miu Miu, Jimmy Choo etc. while Claire, a newcomer to the area, is initially considered an outcast due to her financial and fashion status. She is also not welcomed at first because of her attitude, which is that she assumes since she is living in Massie's guest house she should be Massie's friend and a member of the Pretty Committee. As the series progresses, she slowly develops a friendship with Massie, realizing that she must earn her friendship, and eventually becomes a member of the group. She soon finds out though, life in The Pretty Committee isn't all unicorns and gold....

The first novel, The Clique, was released on May 19, 2004. As of August 2010, 13 novels have been released in the main series.[1][2] On October 4, 2006, a box set called "The Clique Collection" was released containing the first three novels of the series.[3] A second set was released in November 2006 containing books four through six.[4] From April to August 2008, five novellas named after the five main characters were published in a subseries called "The Clique Summer Collection." The novellas focus on each titular characters' activities during the summer between their seventh and eighth grades in school.[5] Harrison composed a guide to the series' "teen speak" terminology and trivia, Cliquetionary, which was released on November 16, 2009.[6] It was announced on Lisi Harrison's website that the fourteenth book (which will be released February 15, 2011) would mark the end of the series.[citation needed]

In 2007, Warner Brothers announced that it had partnered with publisher Alloy Entertainment to create a series of direct-to-DVD films based on the books. A film, based on the first novel The Clique, was released on November 18, 2008.[7] The novels are being adapted into a series of graphic novels by Yen Press, with the first volume due for release July 2010.[8]

“Todd Lyons”: Claire’s younger brother, who has curly red hair and is a major eavesdropper. Throughout the series he harbors a major crush on Massie.

Nurse Adele: The school nurse that helped Claire when she first came to OCD. She owns a lost and found in the office and often chats with Claire.

The Clique was selected as a "Quick Pick For Reluctant Young Adult Readers" by YALSA.[34] Best Friends for Never was nominated for the 2005 Quill Awards in the "Young Adult/Teen" category.[35] Best Friends for Never reached The New York Times bestseller list in early February 2005, four months after it was published, but remained there only one week.[36] It returned in late February for another week, reaching #7.[37] Following the release of the next volume in the series, It entered the bestseller list again in late March, where it stayed another week, then in late April, where it remained for three weeks.[38][39][40] In late March it also made an appearance on the Publishers Weekly bestseller list, coming in at #9.[41] Copies of the novel have continued to sell in large numbers: nearly 150,000 in 2005,[42] over 200,000 in 2006,[43] and over 150,000 in 2007.[44]

Three of the novels from the "Summer Collection", Alicia, Dylan, and Massie, made the New York Time's Children's Books best seller list. On June 22, 2008, Alicia debuted on the list in first place, with Dylan and Massie placing second and sixth, respectively.[45]

In reviewing the first novel, The Clique, reviewers remarked on the behavior of the characters, with Publishers Weekly noting that it "takes cliquish, snobbish behavior to Hollywood extremes" and School Library Journal saying that "the cruelty of the clique [is not] redeemed with any sort of a satisfying ending."[14][15] There were also comments about the novel's use of brand names: School Library Journal said that it "has trendy references kids will love"; Booklist expounded more on the subject, saying that the novel goes into "too much detail about how the superwealthy live" but added that it "has fun with the tyranny of brand names" - although they also cautioned that "the very specifics that teens will recognize will be 'so out' before the year is over." Additionally, Booklist described the instant messaging segments as "hilarious", while School Library Journal criticised "the shallowness of the characters" and "the one-dimensional plot".[15] Spero News says "At first, it's easy to hate this book and the shallow materialism that these characters embody. On the other hand, they're so impossible to take seriously that you have to laugh at them. These girls are so 13-going-on-30."[46]

Reviewers' general descriptions of Best Friends for Never focused on its lightweight nature and entertainment value: Book Loons called it "good soap operatic fun",[47] The Virginian Pilot said it was "a fairly quick and easy read",[48] Teen Reads found it to be "another quick, fun, enjoyable read",[49] while Romantic Times thought that it was "sinful, nasty fun" and gave it three stars.[50] More negative comments that were made included The Virginian Pilot's assertion that it "lacks the sophistication and style of deeper novels".[48] On the behavior of the characters—something the first volume was criticised for[14][15]—Romantic Times said, "Good news for fans—the girls are just as catty now as they were before."[50] Book Loons added that it "does capture both the occasionally unpleasant verbal interactions and emotional vulnerability of pre-teen girls."[47] The book's cliffhanger ending was described as "perfect" by Teen Reads[49] and according to The Virginian Pilot is, along with the "mild twists", what made the novel an "interesting read."[48]