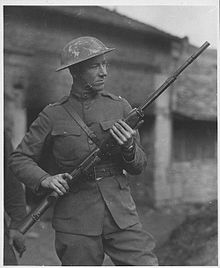 2nd Lt. Val Browning with the Browning Automatic Rifle in France during World War I.

Automatic rifle is a term generally used to describe a semi-automatic rifle chambered for a rifle cartridge, capable of delivering both semi- and full automatic fire. This "select-fire" capability, as well as the (general) use of magazine-fed rifle ammunition, differentiate it from other classes of automatic firearm such as the machine gun and submachine gun.

In many cases, however, it simply describes a rifle capable of self-loading, but not capable of automatic fire (i.e., semiautomatic). Depending on the expert and point in history, full-automatic carbines and assault rifles are sometimes considered to be a type of automatic rifle, and at other times separated into their own categories.

An "assault rifle" is a subclass of automatic rifle generally differentiated by the use of less-powerful rifle cartridges than the machine gun or battle rifle of the period, which allows an infantryman to control the recoil of the weapon in automatic fire without the use of a bipod or other mount. Such cartridges are known as "intermediate" cartridges. The Kalashnikov AK-47 assault rifle, for instance, commonly uses a 7.62x39mm round, with the same diameter bullet but smaller and less powerful cartridge when compared to the standard Soviet rifle bullet in use at the time of the AK-47's introduction, the 7.62x54mmR. In comparison, the U.S. M16A1 is chambered for the 5.56mm NATO round, a derivative of the .223 Remington civilian hunting cartridge and a less-powerful round than the 7.62x51mm NATO (.308 Winchester) cartridge used by its predecessor the M-14, and the 30-06 Springfield cartridge used by the M1 Garand and Springfield M1903. It is sometimes suggested that the fire-selector switch design can be used to differentiate an "assault rifle" from other classes of automatic rifle, however both the AK-47 and the M-16 are called "assault rifles" even though the first "off-safe" position of the fire selector is semi-automatic for an M-16 but full-automatic for an AK-47, so this supposition is false.

The Mexican Mondragón rifle, the first automatic rifle in the world

The world's first automatic rifle was the Mexican Mondragón rifle and was designed by General Manuel Mondragón. He began work in 1882 and patented the weapon in 1887. In the next century, the automatic rifle traces its roots to World War I, where the Browning Automatic Rifle (BAR) and Huot first appeared, to fulfill the function of the light machine gun in an infantry assault role;[1] only the Mondragón and the Browning entered service. The StG 44 is considered the first modern assault rifle.