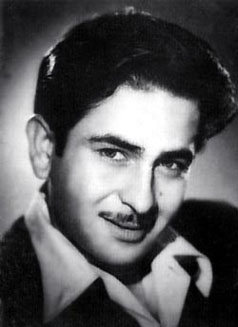 
Ranbirraj Kapoor 'The Show-man' (: राज कपूर, Rāj Kapūr, , - , ) was an n , producer and director of movies. [ [http://www.allmusic.com/cg/amg.dll?p=amg&sql=11:3pfuxqrkldae~T1 Allmusic biography] ] He is part of the famous and is the son of , and Rama Kapoor, grandson of Dewan Basheswarnath Kapoor and great-grandson of Dewan Keshavmal Kapoor.

Raj Kapoor began his career as a clapper boy assisting Kidar Sharma at a film studio. At age eleven, he appeared in films for the first time, in the 1935 film "Inquilab". After acting in several other films the next 12 years, Raj Kapoor's big break came with the lead role in "Neel Kamal" (1947) opposite in her first role as a leading lady. In 1948, at the age of twenty-four, he established his own studio, R. K. Films, and became the youngest film director of his time. His first movie as a producer, director and star was the 1948 film "Aag" which was also the first of his many films with actress . However the film failed to do well at the box office. In 1949 he once again starred alongside Nargis in 's classic blockbuster "Andaz" which was his first major success as an actor.

He went on to produce, direct and star in many box office hits such as "" (1949), "" (1951), "" (1955), "" (1956) and "" (1960). These films established his screen image as modeled on 's most famous screen persona. In 1964 he produced, directed and starred in "" which was his first film in colour. This was his last major success as a leading actor. He moved onto directing and starring in his ambitious 1970 film, "" (My name is Joker), which took more than six years to complete. The film was said to be loosely based on his own life. When released in 1970, it was however a box office disaster putting him into a financial crisis. Despite this setback, the film was much later acknowledged as a misunderstood classic and Raj himself regarded this film as his favourite.

He bounced back in 1971 when he co-starred with his eldest son in Randhir's acting and directorial debut "" (1971) which also starred Raj's father Prithviraj Kapoor as well as Randhir's wife to be . From then on he acted in films as a character actor and focused on producing and directing films. He launched his second eldest son 's career when he produced and directed "Bobby" (1973) which was not only a huge box office success but also introduced actress , later a very popular actress, and was the first of a new generation of teen romances. Dimple wore bikinis in the film which was quite unique for Indian films then.

Raj Kapoor suffered from in his later years; he died of complications related to asthma in 1988 at sixty-three years of age. At the time of his death he was working on the movie "Henna" (an Indo-Pakistani love story). The film was later completed by his son Randhir Kapoor and released in 1991 going onto become a huge success.

Raj Kapoor is appreciated both by film critics and ordinary film fans. Film historians and movie buffs speak of him as the " of ," since he often portrayed a tramp-like figure, who, despite adversity, was still cheerful and honest. His fame spread world-wide. He was adored by audiences in large parts of , the , the former , , and ; his movies were global commercial successes.

Many of Raj Kapoor's movies had a patriotic theme. His films "Aag", "" and "" ("In the Country Where the Ganges Flows") celebrated the newly independent India, and encouraged film-goers to be patriots. Raj Kapoor commissioned these famous lyrics for "," a song from the movie "":

:These shoes are Japanese:These trousers are English:The red cap on my head is Russian:However my heart is Indian

The song is still extremely popular and has been featured in a number of movies since "". Indian author stopped the show with her inaugural speech at the 2006 when she used these lyrics to express her own heartfelt patriotism and debt to her country.

Raj Kapoor was a canny judge of music and lyrics. Many of the songs he commissioned are evergreen hits. He introduced the music directors and the lyricist Hasrat Jaipuri. He is also remembered for his strong sense of visual style. He used striking visual compositions, elaborate sets, and dramatic lighting to complete the mood set by the music. He introduced the actors , , and Mandakini, as well as launching and reviving the careers of his sons Rishi and Rajiv.

The Kapoor family hailed from what is now (then called Lyallpur) in the Punjab province of present-day . Raj Kapoor was born on , in in the of what is now . He was named "Ranbirraj Kapoor" at birth, and was the eldest of the four children of renowned stage and cinema actor and his wife Smt. Ramsarni (Rama) Devi nee Mehra. His younger brothers were the actors and . He also had a sister by name Urmila Sial. In 1946, at the age of twenty-two, Raj Kapoor was wed to Krishna Malhotra belonging to in a traditional family-arranged wedding. Krishna was a distant relative of Raj's being his father's maternal uncle's daughter. Her brothers as well as were also actors. Raj Kapoor and Krishna's eldest son was born in 1947, followed by their elder daughter Ritu the year after, in 1948. The second son was born in 1952, and second daughter Reema in 1956. Their youngest son, was born in 1962. , and have all been associated with the Hindi film industry as actors, directors or producers.

Raj Kapoor is also known to have had a longtime romantic relationship with the renowned actress Nargis during the 1950s. The couple starred in several films together, including "" and "".

Noted film personalities and are the granddaughters of Raj and Krishna Kapoor, being the daughters of their eldest son by his wife . In , the son of and , his family has found another Kapoor scion to join the ranks of the Hindi Film Industry quite recently.

Ranbir is now known the youngest and latest of the kapoors.

Association with other artists

Shankar-Jaikishan were his music director of choice. He worked with them in 20 films in all including 10 of his own films from "" until . ("" with and "" being two exceptions in this period). Only after Jaikishan passed away, did he turn to a different music director - for "Bobby".

* Raj Kapoor and worked together in 16 films including 6 of his own productions.

Mukesh was Raj Kapoor's almost exclusive singing voice in almost all of his films. However has also sung many notable and super-hit songs for Raj Kapoor, for instance in and . Examples of such songs are best illustrated by following songs: