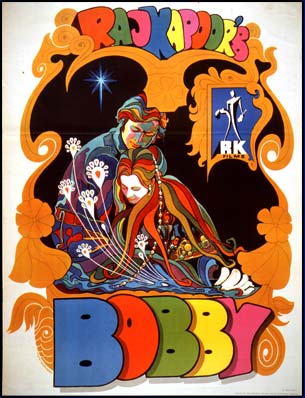 "Bobby", released in 1973, is a popular film directed by . The film was widely popular, and widely imitated. It also represented the film début for and the first leading role for 's son, .

The movie is known to be a trend-setter in its own right. It introduced in Bollywood, the genre of teenage romance with a rich-vs-poor clash as a backdrop. Numerous movies in the following years were inspired by this plot.

The film is a story about the love between two teenagers of different classes - Raj Nath (), son of a rich businessman Mr. Nath (played by ), and Bobby Braganza (), daughter of a poor Christian fisherman Jack Braganza (played by ).

The couple first meet when Raj goes to meet his old governess, Mrs. Braganza. There, he sees her grand daughter Bobby, and it is love at first sight for him. As the story progresses, Raj realises that his relationship with the daughter of a poor fisherman is not taken kindly by his eccentric father. Upon Raj's insistence, Mr. Nath visits Jack to initiate talks of Raj and Bobby's wedding. But instead, Mr. Nath accuses Jack of using his daughter's beauty and charm to trap Raj for his money. He even offers him cash in exchange for Bobby. Jack feels highly humiliated by this accusation and reciprocates by insulting Mr. Nath. Their talk enters a deadlock and spells doom for Raj and Bobby's tender love.

Mr. Nath engages Raj to a rich but mentally challenged girl, Alka, played by , in order to establish business ties with her father. But Raj runs away from home, to unite with Bobby. They both run away together. Mr. Nath advertises a reward for anyone who can help find his son. Prem Chopra () decides that he wants the money, and he and his goons kidnap Raj and Bobby. When they try to escape, Prem starts beating Raj, and Jack tries to rescue him. Mr. Nath and the police come to help. Raj and Bobby run away and jump into the waterfall. Both Mr. Nath and Jack jump into the water. Mr. Nath rescues Bobby, while Jack rescues Raj. They realize that they love their children very much and don't want to stand in their happiness. They accept each other's kids as their own and give their blessings to the union.

* This movie was so popular that many children born that year or later were named Bobby. At that time even Russian names, such as Monica and Tanya, were popular in India and this movie is one of the reasons many Indians are named Bobby, particularly in North India.Fact|date=June 2007
* The "Main Shayar To Nahi" song was picturised on Rishi Kapoor in this movie. The same song was reused and picturised again on him as Karan's father in movie "Hum Tum" at the Paris Airport.
* This was the first film for both Rishi Kapoor and Dimple Kapadia in lead roles.
* Both and embarked on a real-life romance, but it ended shortly thereafter. [ [http://www.webindia123.com/movie/feature/f010905.htm Will 'Pyar Mein Twist' revive the Dimple-Rishi magic? - Bollywood news Webindia123.com ] ]
* Rishi Kapoor was completely in the beginning of the film.
* The Rajdoot GTS 175 Was used by the couple in the movie. The Bike was also affectionately called Bobby after this movie.
* Raj Kapoor was an avid fan of Archie comics which also provided him a great deal of inspiration to make "Bobby" .