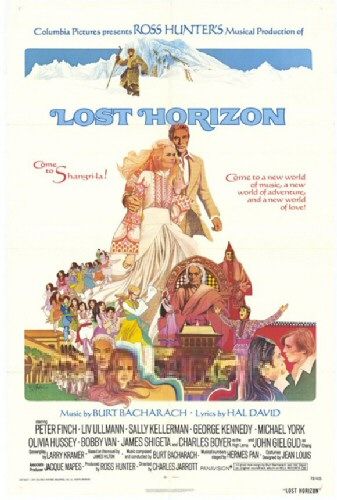 The film is a of 's film of the same name, with screenplay by . Both films are based on 's novel. However, the 1973 version was a notorious critical and commercial failure. It is considered one of the last in a string of box office musical failures which came in the wake of the success of "The Sound of Music". [Caporiccio, Joe "Lost Horizon" CD soundtrack liner notes.] Attempts to update the idea of with its racial inequalities intact, coupled with old-fashioned songs effectively sealed its fate. noted that Shangri-La was depicted as:

a middle-class geriatric [where] ... you can live indefinitely, lounging and puttering about for hundreds of years... the s are kept in their places, and no blacks... are among the residents. There's probably no way to rethink this material without throwing it all away. [Kael, Pauline "Reeling" (1977) Marion Boyars]

After derided preview screenings [Medved, Harry and Michael "" (1980) Berkley] re-cut the film, but to no avail. Critic John Simon remarked that it "must have arrived in garbage rather than in film cans". The songs were written by and , whose long partnership hit rocky ground within months of this film's release.

In a similar to the use of in "The Wizard of Oz", the film only becomes a musical in the central Shangri-La sequence, with the framing 'civilization' sequences played as straight drama.

The film was not available on video for years until Pioneer Entertainment released a reconstructed version of the longer cut on . It is out of print and now fetches high prices on .

This version is much closer to the 1937 film than to the original James Hilton novel. It tells the story of a group of travellers whose airplane is hijacked while fleeing a bloody revolution. The airplane crash lands in and unexplored area of the , where the party is rescued and taken to the lamasery of . Miraculously, Shangri-La, sheltered by mountains on all sides, is a temperate paradise amid the land of snows. Perfect health is the norm, and inhabitants live to very old ages while maintaining a youthful appearance.

The newcomers quickly adjust to life in Shangri-La, especially Richard Conway (), the group's leader. He meets and falls in love with Catherine (), a school teacher. Sally Hughes (), a drug-addicted "" photographer is suicidal at first, but begins counseling with lamas Chang () and To Len () and discovers a new lease on life. Sam Cornelius () discovers gold, but Sally convinces him to use his engineering skills to bring better irrigation to the famers of Shangri-La instead of attempting to smuggle the gold out. Harry Lovett () is a third-rate comic and man who discovers he has a flair for working with the children of Shangri-La. Everyone is content to stay except Conway's younger brother, George (). George has fallen in love with Maria (), a dancer, and wants to take her with him when he leaves. Chang warns Richard that Maria came to Shangri-La over eighty years before, at the age of twenty. If she were to leave the valley she would quickly revert to her actual age.

Richard is summoned to meet the High Lama (), who informs him that the he was brought there for a reason, to take over the leadership of the community when he himself dies. However, the night the High Lama dies, George and Maria tell Richard that everything the High Lama and Chang have said is a lie, and convince him to leave with them immediately. Richard is still in shock from the High Lama's death, and leaves without even saying goodbye to Catherine. Not long after their departure Maria suddenly ages and dies, and George falls to his death down an icy ravine. Richard struggles on alone, ending up in a hospital bed in the Himalayan foothills. He runs away, back to the mountains, and miraculously finds the portal to Shangri-La once more.

The soundtrack was moderately more successful than the film peaking at #56 on the . The title song was performed by .Of the lead actors only , , and do their own singing. , and were dubbed by , , and respectively. The song "Living Together, Growing Together" was a minor hit for . The song "Things I Will Not Miss" was covered by and for the 1973 album Diana and Marvin.

• The World Is A Circle (Catherine)

• The Things I Will Not Miss (Sally and Maria)

• If I Could Go Back (Richard)

• Question Me An Answer (Harry)

Large parts of the score were deleted after the film's release. The dance sections of "Living Together, Growing Together" were cut, and the master negatives lost. "If I Could Go Back", "Where Knowledge Ends (Faith Begins)", and "I Come To You" were cut, but restored for the release of the film. All of the songs appear on the soundtrack LP and CD. According to the notes on the laserdisc release, Sally Kellerman and George Kennedy had a reprise of "Living Together, Growing Together" that was also lost.

appeared previously with Michael York in . Hussey and George Kennedy would be seen together again in the 1978 film and the 1980 sci-fi flop Virus.Even though they play brothers, was in fact 26 years younger than . Much commented at the time, including in the New York Times review, was the fact that 's eyes were taped back to play the part of Chang.