The Michigan Avenue Bridge (officially DuSable Bridge) is a bascule bridge that carries Michigan Avenue across the main stem of the Chicago River in downtown Chicago, Illinois, United States. The bridge was proposed in the early 20th century as part of a plan to link Chicago's south side and north side parks with a grand boulevard. Construction of the bridge started in 1918, it opened to traffic in 1920, and decorative work was completed in 1928. The bridge provides passage for vehicles and pedestrians on two levels; it is an example of a fixed trunnion bascule bridge, which is also known as a "Chicago style bascule bridge". The bridge is included in the Michigan–Wacker Historic District and has been designated as a Chicago Landmark.

The location is significant in the early history of Chicago. Events from the city's past are commemorated with sculptures and plaques on the bridge, and exhibits in the McCormick Bridgehouse & Chicago River Museum—housed in one of the bridge tender houses—detail the history of the Chicago River.

The Michigan Avenue Bridge has a north–south orientation, spanning the main stem of the Chicago River between the Near North Side and Loop community areas of Chicago.[6] Its northern portal lies at the foot of the Magnificent Mile, between the Wrigley Building and Tribune Tower. Its southern portal is at the intersection of Michigan Avenue and Wacker Drive, overlooked by the London Guarantee Building and 333 North Michigan. The neighboring bridges are Columbus Drive Bridge to the east and Wabash Avenue Bridge to the west.

The bridge is situated in a historically significant area.[7] The northern end of the bridge covers part of the Jean Baptiste Point Du Sable Homesite,[n 1] which is commemorated by a National Historic plaque in Pioneer Court. The southern half of the bridge passes over the site of Fort Dearborn, which was constructed in 1803.[n 2] The Fort is commemorated by a large relief above the entrance of the London Guarantee Building, and brass markers positioned in the sidewalks on the south side of the bridge delineate the posited outline of the original blockhouse.[10]

In October 2010, the bridge was renamed DuSable Bridge in honor of Jean Baptiste Point du Sable, Chicago's first permanent resident.[13] A fur trader of African descent who married into the Potawatomi tribe, he established a permanent homestead and trading post near the mouth of the Chicago River in the 1780s.[14] 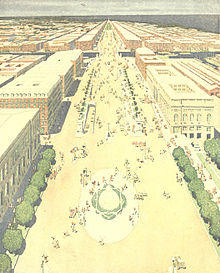 A boulevard to link the parks on Chicago's north and south sides was proposed as early as 1891.[4] An early plan called for a tunnel to link Michigan Avenue south of the river with Pine Street (now Michigan Avenue) north of the river.[15] In 1903 an editorial in the Chicago Tribune proposed a new bascule bridge across the river at Michigan Avenue.[16][17] Other plans suggested that the bridge should be a replica of the Pont Alexandre III that spans the Seine in Paris, or that, rather than constructing an entirely new bridge, the existing Rush Street bridge should be double-decked.[18]

Plans for the boulevard and the construction of a Michigan Avenue Bridge were further elaborated upon in Daniel Burnham's 1909 Plan of Chicago.[19] In 1911 a plan was selected that included the widening of Michigan Avenue from Randolph Street to the river, replacing the Rush Street bridge with a new bridge at Michigan Avenue and the construction of a double-decked boulevard along Pine Street as far as Ohio Street.[20] An ordinance to fund construction was passed in 1913, but was declared void by the Supreme Court of Illinois.[21] A second ordinance was passed in 1914, but legal battles continued until the end of 1916.[22] Construction finally started on April 15, 1918, and the bridge was officially opened in a ceremony on May 14, 1920.[4]

The bridge is one of the contributing properties of the Michigan–Wacker Historic District, which was listed as on the National Register of Historic Places on November 15, 1978.[23] It was also designated as a Chicago Landmark on October 2, 1991.[24] In 2009 the sidewalks and railings on the bridge were replaced, and the bridge was repainted; the design of the new ornamental railings was based on the original 1920 design for the bridge's railings, replacing more utilitarian ones that had been substituted at a later date.[25]

Michigan Avenue Bridge is a double-leaf, double-deck, fixed counterweight, trunnion bascule bridge.[2] It was engineered by the Chicago Department of Public Works, Bureau of Engineering;[2] Edward H. Bennett was the consulting architect and William A. Mulcahy the chief engineer of construction.[26] At the time of construction it was believed to be the first double-deck bridge ever built to have roadway on both levels; faster non-commercial traffic using the upper deck and slower commercial traffic that served the various industries and docks in the vicinity of the river using the lower deck.[3] 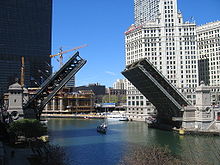 Each of the bridge's leaves are divided into two along the axis of the bridge such that it functions as two parallel bridges that can be operated independently of one another; at the time of construction bridges in the Chicago River were frequently struck by vessels, and this duplex arrangement allows for leaves damaged in such a collision to be opened for repair without needing to completely close the bridge to traffic.[27] The counterweights are below the level of the lower deck and when the bridge is opened they swing down into 40-foot (12 m) deep reinforced concrete tailpits that descend 34.5 feet (10.5 m) below the surface of the river.[28] Each of the two tailpits is supported on 9 cylindrical foundation piers. One of these piers was sunk to bedrock, 108 feet (33 m) below the river surface, the other 17 piers are sunk to the hardpan, which is 80 to 90 feet (24 to 27 m) below the water level.[28] On the south side of the river one of the freight tunnels of the Chicago Tunnel Company had to be re-routed to make room for the tailpit.[28] The counterweights are composed partly of concrete and partly of a concrete composite with rivet punchings; each of the four counterweights weighs 1,595 short tons (1,447 t).[29]

The bridge abutments and the facing of the bridge tender houses are made of Bedford stone.[30] There are four bridge tender houses: the northwest and southeast bridgehouses house the controls for operating the bridge; the northeast and southwest bridgehouses are purely decorative.[31] Two 108 horsepower (81 kW) motors open and close each of the 3,750-short-ton (3,400 t) bridge leaves.[32] Originally the bridge was staffed 24 hours a day, and opened up to 3000 times a year to allow ships through, but since the 1970s bridge lifting has been scheduled in the spring and autumn, when the bridge is raised twice weekly to allow sailboats to pass between Lake Michigan and inland boat yards where they are stored for the winter.[31]

Sculptures on the bridge tender houses. Left to right: The Discoverers, The Pioneers, Defense, Regeneration.

In 1928 sculptures depicting scenes from Chicago's history were added to the outward-facing walls of the four bridgehouses. The sculptures on the northern bridgehouses were commissioned by William Wrigley, Jr., and are by James Earle Fraser: The Discoverers depicts Louis Joliet, Jacques Marquette, René-Robert Cavelier, Sieur de La Salle and Henri de Tonti;[33] The Pioneers depicts John Kinzie leading a group through the wilderness.[34] The sculptures on the southern bridgehouses were commissioned by the B. F. Ferguson Monument Fund, and are by Henry Hering: Defense depicts a scene from the 1812 Battle of Fort Dearborn;[35] Regeneration depicts workers rebuilding Chicago after the Great Chicago Fire of 1871.[36][37]

The bridge is also bedecked with 28 flagpoles, usually flying the flags of the United States, Illinois and Chicago. On special occasions other banners may be displayed.

Entrance to the Bridgehouse Museum

The southwest bridgehouse has been converted into a museum. The McCormick Bridgehouse & Chicago River Museum is a 5-floor, 1,613-square-foot (149.9 m2) museum that opened on June 10, 2006; it is named for Robert R. McCormick, formerly owner of the Chicago Tribune and president of the Chicago Sanitary District.[31] The Robert R. McCormick Foundation was the major donor that helped to provide the $950,000 cost of the formation of the museum.[31] It is run by the Friends of the Chicago River,[38] and includes exhibits on the history of the Chicago River and the bridge. Visitors are also allowed to access the bridge's gear room; during the spring and fall bridge lifting visitors can see the bridge gears in operation as the leaves are raised and lowered.[31] Due to its small size and tight access stairway only 34 people are allowed inside the museum at any one time.[31]