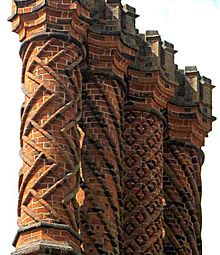 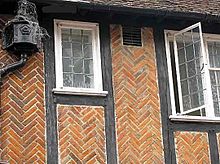 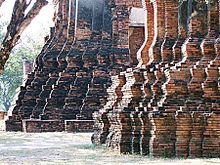 Brickwork is masonry produced by a bricklayer, using bricks and mortar to build up brick structures such as walls. Brickwork is also used to finish corners, door, and window openings, etc. in buildings made of other materials.

Where the bricks are to remain fully visible, as opposed to being covered up by plaster or stucco, this is known as face-work or facing brickwork. 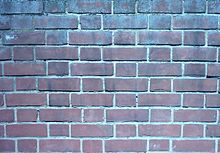 A wall built in Flemish bond

Brick sizes are, in general, coordinated so that two rows of bricks laid alongside, with a mortar joint between them, are the same width as the length of a single brick laid across the two rows. That allows headers, bricks laid at 90 degrees to the direction of the wall, to be built in and tie together two or more layers, or wythes, of brick. The thickness of a brick wall is measured by the length of a brick, so a wall one brick thick contains two layers of brick, a wall one and a half bricks thick contains three layers, etc. A common metric coordinating size is 215 millimetres (8.5 in) x 102.5 millimetres (4.04 in) x 65 millimetres (2.6 in), which is intended to work with a 10 millimetres (0.39 in) mortar joint: 75 millimetres (3.0 in) course height, 215 millimetres (8.5 in) wall thickness etc. This is based on the earlier inch sizes. There are many different standard brick sizes worldwide, most with some coordinating principle.

The simplest type of wall is constructed in solid brickwork, normally one brick thick. Bricks are laid in rows known as courses, the arrangement of headers and stretchers in each course gives rise to different patterns or bonds.

In a cavity wall, two layers (or leaves) of brickwork are tied together with metal ties, with a cavity of 2 to 4 inches that may be filled with insulation.

A non-structural outer facing of brick is tied back to an internal structure: a layer of blockwork, timber or metal studwork etc.

Brick Types. There are two main types of clay bricks: pressed and wire-cut. Pressed bricks usually have a deep frog in one bedding surface and a shallow frog in the other. Wire-cut bricks usually have 3 or 4 holes through them constituting up to 25% of the total volume of the brick. Some ‘perforated’ bricks have many smaller holes.

Brick Usage. There are three main categories of use, and both pressed bricks or wire-cut brick types are used in all three categories:

Frog up/down. A frog is a recessed part of a surface of a brick. Pressed bricks are laid ‘frog up’ when maximum strength is required especially in engineering work. This method also increases the mass of a wall and decreases sound transmittance. Pressed bricks may be laid frog down; this method is favoured by the bricklayer, since less mortar is required for bedding. There may also be a marginal increase in thermal insulation due to the entrapped air pockets. A disadvantage of this method is that, with bricks having a very deep ‘V’-shaped frog, there may be some difficulty in making reliable fixings to the wall when the fixing hits an air pocket.

Wire-cut bricks may be laid either way up but some types of wire cuts have a textured (combed) face, creating folds in the face of the brick, which is directional. It is advisable to lay these bricks with the folds hanging downward to maximise the weathering characteristics of the brick.

Ties or cavity ties are used to tie layers of brickwork into one another, to form a structural whole. A common type is a figure-eight of twisted wire, in general stainless steel to avoid failure due to corrosion. The loop at either end is buried in the mortar bed as the wall is built up.

Mortar is a mixture of sand, lime, and Portland cement, mixed with water to a workable consistency. It is applied with a bricklayer's trowel, and sets solid in a few hours. There are many different mixes and admixtures used to make mortars with different performance characteristics.

Air brick - a brick with perforations to allow the passage of air through a wall. Usually used to permit the ventilation of underfloor areas.
Bat - a cut brick. A quarter bat is one-quarter the length of a stretcher. A half-bat is one-half.[4]
Bullnose- Rounded edges are useful fo window sills, and capping on low and freestanding walls.
Cant - a header that is angled at less than 90 degrees.
Closer - a cut brick used to change the bond at quoins. Commonly a quarter bat.
- Queens closer - a brick that has been cut over its length and is a stretcher long and a quarter-bat deep. Commonly used to bond one brick walls at right-angled quoins.
- Kings closer - a brick that has been cut diagonally over its length to show a half-bat at one end and nothing at the other.
Corbel - a brick, block, or stone that oversails the main wall.
Cramp - or frame cramp is a tie used to secure a window or door frame.
Creasing tile - a flat clay tile laid as a brick to form decorative features or waterproofing to the top of a garden wall.
Dog Leg - a brick that is specially made to bond around internal acute angles. Typically 60 or 45 degrees.
Dog tooth - a course of headers where alternate bricks project from the face.
Fire Wall - a wall specifically constructed to compartmentalise a building in order to prevent fire spread.
Honeycomb wall - a wall, usually stretcher bond, in which the vertical joints are opened up to the size of a quarter bat to allow air to circulate. Commonly used in sleeper walls.
Indent - a hole left in a wall in order to accommodate an adjoining wall at a future date. These are often left to permit temporary access to the work area.
Movement Joint - a straight joint formed in a wall to contain compressible material, in order to prevent cracking as the wall contracts or expands.
Noggin - infill brick panels in timber framework buildings
Party Wall - a wall shared by two properties or parties.
Pier - a free-standing section of masonry such as pillar or panel.
Plinth - a stretcher that is angled at less than 90 degrees.
Quoin - a corner in masonry.
Racking back - stepping back the bond as the wall increases in height in order to allow the work to proceed at a future date.
Saw tooth - a course of headers laid at a 45-degree angle to the main face.
Shear Wall - a wall designed to give way in the event of structural failure in order to preserve the integrity of the remaining building.
Sleeper wall - a low wall whose function is to provide support, typically to floor joists.
Snapped Header - a half-bat laid to appear as a header. Commonly used to build short-radii half-brick walls or decorative features.
Squint - a brick that is specially made to bond around external quoins of obtuse angles. Typically 60 or 45 degrees.
Stopped end - the end of a wall that does not abut any other component.
Toothing - the forming of a temporary stopped end in such a way as to allow the bond to continue at a later date as the work proceeds.
Tumbling in - bonding a battered buttress or breast into a horizontal wall.
Voussoir - a supporting brick in an arch, usually shaped to ensure that the joints appear even.
Withe - the central wall dividing two shafts. Most commonly to divide flues within a chimney.

Ruins of Rosewell Plantation, Gloucester County, Virginia, one of earliest works in America in Flemish bond. The bricks were imported from England.

Flemish bond, also known as Dutch bond, has throughout history been considered the most decorative bond, and for this reason was used extensively for dwellings until the adoption of the cavity wall. It is created by alternately laying headers and stretchers in a single course.[5] The next course is laid so that a header lies in the middle of the stretcher in the course below. This bond is two bricks thick. It is quite difficult to lay Flemish bond properly, since for best effect all the perpendiculars (vertical mortar joints) need to be vertically aligned. If only one face of a Flemish bond wall is exposed, one-third of the bricks are not visible, and hence may be of low visual quality. This is a better ratio than for English bond, Flemish bond's main rival for load-bearing walls.

A common variation often found in early-18th-century buildings is Glazed-headed Flemish Bond, in which the exposed headers are burned until they vitrify with a black glassy surface. Other variants are Monk bond and Wessex Bond, the latter with three stretchers between each header. This is easier to lay than full Flemish Bond and produces a less intense, but nevertheless "pretty" brickwork face. 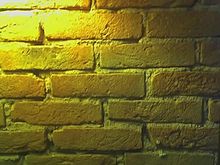 Stretcher bond in a brick wall in a restaurant

Stretcher bond, also known as running bond, consists of bricks laid with only their long narrow sides (their stretchers) showing, overlapping midway with the courses of bricks below and above. It is the simplest repeating pattern, but, since it cannot be made with a bond to the bricks behind, it is suitable only for a wall one-half brick thick, the thinnest possible wall.[6] Such a thin wall is not stable enough to stand alone, and must be tied to a supporting structure. It is common in modern buildings, in particular as the outer face of a cavity wall, or as the facing to a timber or steel framed structure. Stretcher bond is now used in building garden and boundary walls that are "stand alone" by incorporating a layer of steel brick-reinforcing mesh, laid every three or so courses, thus acting as headers in tying the two leaves together.

This bond has two alternating courses of stretchers and headers,[5] with the headers centered on the stretchers, and each alternate row vertically aligned. There is a variant in which the second course of stretchers is half offset from the first, giving rise to English cross bond or Dutch bond.[7] 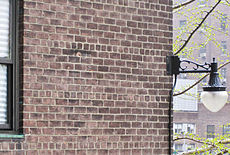 English garden wall bond - A repeating sequence of three courses of stretchers followed by a course of headers.[5]
Flemish garden Wall Bond - A repeating sequence of three stretchers followed by a header in each course.[5] The courses are offset so that the headers of the courses above and below is centered on the middle stretcher of the course between (so at any header the sequence vertically is header-stretcher-header etc.). A variation of Flemish Garden Wall bond is Flemish diagonal bond - A complex pattern of stretcher courses alternating with courses of one or two stretchers between headers, at various offsets such that over ten courses a diamond-shaped pattern appears.[7]
Water Bond - a nine-inch wall bond where both skins are built in stretcher bond, but the bed joints in are staggered so as not to align. This bond is often specified by local councils in the North of England for manholes.

Rat-trap bond, also known as Chinese bond, is a type of garden wall bond similar to Flemish, but consisting of rowlocks and shiners instead of headers and stretchers (the stretchers and headers are laid on their sides, with the bed face of the stretcher facing outward). This gives a wall with an internal cavity bridged by the headers, hence the name. The main advantage of this bond is economy in use of bricks, giving a wall of one-brick thickness with fewer bricks than a solid bond. The bond also gives the advantage that both skins are tied together. Rat-trap bond was in common usage in England for building houses of fewer than 3 stories up to the turn of the 20th century and is today still used in India as an economical bond, as well for the insulation properties offered by the air cavity. Also, many brick walls surrounding kitchen gardens were designed with cavities so hot air could circulate in the winter, warming fruit trees or other produce spread against the walls, causing them to bloom earlier and forcing early fruit production.[10][11]