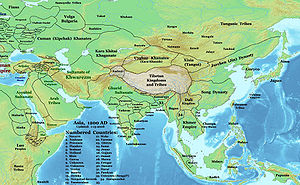 Asia in 1200 AD, showing the Yadava Dynasty and its neighbors.

Chedi kingdom (चेदि) was one among the many kingdoms ruled during early periods by Paurava kings and later by Yaduvanshi Rajput kings in the central and western India. It falls roughly in the Bundelkhand division of Madhya Pradesh regions to the south of river Yamuna and along river Betwa or Vetravati. The Chedi kingdom was ruled by Sisupala, an ally of Jarasandha of Magadha and Duryodhana of Kuru. He was a rival of Vasudeva Krishna who was his uncle's son. He was killed by Vasudeva Krishna during the Rajasuya sacrifice of the Pandava king Yudhisthira. Bhima's wife was from Chedi. The city called Suktimati is mentioned as the capital of Chedi. Prominent Chedis during Kurukshetra War included Damaghosha, Shishupala, Dhrishtaketu, Suketu, Sarabha, Bhima's wife, Nakula's wife Karenumati, Dhristaketu's sons. Other famous Chedis included King Uparichara Vasu, his children, King Suvahu, King Sahaja.

Chedi mentioned as a Kingdom of Ancient India (Bharata Varsha)

Chedi was one among the kingdoms chosen for spending the 13th year of exile by the Pandavas.

Surrounding the kingdom of the Kurus, are, many countries beautiful and abounding in corn, such as Panchala, Chedi, Matsya, Surasena, Pattachchara, Dasarna, Navarashtra, Malla, Salva, Yugandhara, Saurashtra, Avanti, and the spacious Kuntirashtra. (4,1)

King Uparichara Vasu and the festival of bamboo pole

Uparichara Vasu was a king of Chedi belonging to the Puru Dynasty. He was known as the friend of Indra. During his reign, Chedi kingdom contained much mineral wealth. It was abundant in animals and corn. There were many towns and cities in the kingdom. He possessed a very special chariot. He introduced a festival in his kingdom in the honor of Indra. The festival involved planting of a bamboo pole every year, in honor of Indra. The king will then pray for the expansion of his cities and kingdom. After erecting the pole, people decked it with golden cloth and scents and garlands and various ornaments. From Chedi, he ruled a large territory, placing his sons as governors of various provinces. His son Vrihadratha (Maharatha) was installed in Magadha. His other sons, viz Pratyagraha, Kusamva (Manivahana), Mavella and Yadu also became governors at various places. Thus the Chedi king attained the status of an emperor and his kingdom became a vast empire. He diverted the waters of river Suktimati from the locks of the Mountain Kolahala, for irrigating his capital-city which he named Suktimati. (1,63)

His wife Girika, was from the valley of Kolahala. Girika's brother was installed as the generalissimo of Vasu's army. Apart from his five royal sons, he had a son and a daughter born of a woman of fisherman community. The male child, in due course established the Matsya Kingdom and founded the royal dynasty called Matsya Dynasty. The female child lived as a member of fishermen community. Her line established as fishermen on the banks of river Yamuna, in the kingdom of Kurus. The famous Kuru king Santanu's wife Satyavati was from this fishermen community. The author of Mahābhārata, vis Krishna Dwaipayana Vyasa and the Kuru kings viz Chitrangada and Vichitravirya were the sons of Satyavati. Pandavas and Kauravas where the grandsons of Vichitravirya.(1,63)

Sisupala was the son of the King Damaghosha (1,189). He had another name viz Sunitha. His mother was Srutakirti, who was the sister of Kunti, the mother of Pandavas. Both Kunti and Srutakirti were sisters of Vasudeva the father of Vasudeva Krishna. However Sisupala developed enmity with Krishna (2,44), though he was affectionate to the Pandava Bhima. During his military campaign to collect tribute for Pandava king Yudhisthira's Rajasuya sacrifice, Bhima stayed at the palace of Sisupala for a month as a guest. He also accepted Yudhisthira's sway over his kingdom and gave Bhima tribute (2,28). During the midst of Yudhisthira's Rajasuya ceremony, a dispute arose between Sisupala and Vasudeva Krishna. Pandavas tried to mediate. He also rebuked the Pandavas and Kuru grandsire Bhishma along with Krishna. Then Krishna, extremely provoked, slew Sisupala. (2,44).

Sisupala's hostilities to Krishna were many. He burned the city of Dwaraka, while Krishna was in Pragjyotisha with his army. He attacked king Bhoja, sporting at Raivataka hill close to Dwaraka. He stole the horse of Krishna's father Vasudeva, during his horse-sacrifice. He insulted the wife of Akrura (Vabhru - the friend of Krishna), on her way from Dwaraka to Sauvira Kingdom. He also insulted princess of Visala, viz Bhadra, the fiancé of Karusha king. (2,44)

Dhristaketu , the king of Chedi (3,12), was described as the son of king Sisupala (5,50). During the time of Dhristaketu also, Suktimati was the capital of Chedi. Dhristaketu was an army-general in the army of Pandavas in Kurukshetra War. He was the leader of the army of the Chedis, the Kasis, and the Karushas (5,199). He was a Maharatha (a great car-warrior) as per the rating of Bhishma (5,172). One of his sons also took part in the war (5,57). He was slain by Drona (7,128), (11,25). Dhristaketu also was slain in battle by Drona.

Other Kings of Chedi

Chedi King Dhristaketu and his sons

Other kingdoms in this group include