The New Zealand Order of Merit is an order established in 1996 "for those persons who in any field of endeavour, have rendered meritorious service to the Crown and nation or who have become distinguished by their eminence, talents, contributions or other merits."[1]

Prior to 1996 New Zealanders received appointments to various British orders, viz. the Order of the Bath, Order of St Michael and St George, Order of the British Empire, Order of the Companions of Honour as well as the distinction of Knight Bachelor.[2] The change came about after the Prime Minister's Honours Advisory Committee (1995) was created "to consider and present options and suggestions on the structure of a New Zealand Royal Honours System in New Zealand, which is designed to recognise meritorious service, gallantry and bravery and long service" [3]

The number of Knights and Dames Grand Companion (and Principal Companions) is limited to 30. Additionally, new appointments are limited to 15 Knight Companions, 40 Companions, 80 Officers and 140 Members per year.[4] Ordinary membership is open to citizens of New Zealand or of Commonwealth of Nations member countries which recognise Elizabeth II as head of state (Commonwealth realms). "Additional" members, appointed on special occasions, are not counted in the numerical limits. Foreigners appointed to the Order are given "Honorary" membership, though if they subsequently become a naturalised New Zealand citizen or a citizen of a Commonwealth realm they are eligible for Additional membership.[5]

Insignia and other distinctions 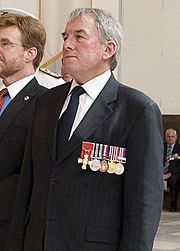 David Ledson wearing the badge for the Officer rank of the New Zealand Order of Merit.

The order's statutes outline certain heraldic privileges connected to the order.[4] Members of the top two grades are entitled to have the Order's circlet ("a green circle, edged gold, and inscribed with the Motto of the Order in gold"[4]) surrounding their shield. Grand Companions are also entitled to heraldic supporters. The Chancellor is entitled to supporters and a representation of the Collar of the Order around his/her shield.

A change to non-titular honours was a recommendation contained within the original report of the 1995 honours committee (The New Zealand Royal Honours System: The Report of the Prime Minister’s Honours Advisory Committee) which prompted the creation of the New Zealand Order of Merit. Titular honours were incorporated into the new system before its implementation in 1996 after the National Party caucus and public debate were split as to whether titles should be retained.[7]

There has long been debate in New Zealand regarding the appropriateness of titles. Some feel it is no longer appropriate as New Zealand has not been a colony since 1907, and to these people titles are out of step with present-day New Zealand. Others feel that titles carry both domestic and international recognition, and that awarded on the basis of merit they remain an appropriate recognition of excellence.

In April 2000 the new Labour Prime Minister Helen Clark announced that knighthoods and damehoods were abolished, and the order's statutes were amended accordingly. Between 2000 and 2009, the two highest awards were called Principal Companion (PCNZM) and Distinguished Companion (DCNZM), and recipients did not receive the title "Sir" or "Dame".[8][9] Their award was recognised solely by the use of post-nominal letters, as for the lower levels of the order.

A National Business Review[10] poll in February 2000 revealed that 54% of New Zealanders thought the titles should be scrapped. The Labour Government's April 2000 changes were criticised by opposition parties, with Richard Prebble of the ACT New Zealand party deriding the PCNZM's initials as standing for "a Politically Correct New Zealand that used to be a Monarchy".

The issue of titular honours would appear whenever honours were mentioned. In the lead up to the 2005 general election, Leader of the Opposition Don Brash suggested that should a National-led government be elected, he would reverse Labour's changes and re-introduce knighthoods.[11]

In 2009, Prime Minister John Key restored the honours to their pre-April 2000 state. Principal Companions and Distinguished Companions (85 people in total) were given the option to convert their awards into Knighthoods or Damehoods.[12] The restoration was welcomed by the Monarchist League of New Zealand.[13] The option has been taken up by 72 of those affected, including rugby great Colin Meads.[14] Former Labour MP Margaret Shields was one of those who accepted a Damehood, despite receiving a letter from former Prime Minister Helen Clark "setting out why Labour had abolished the titles and saying she hoped she would not accept one".[15]