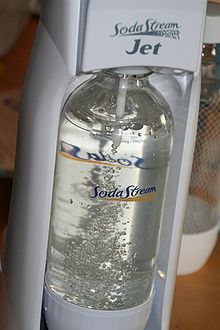 SodaStream (NASDAQ: SODA) is a maker of home carbonation systems that was invented by Guy Gilbey in 1903.[1][2] Later versions allowed the addition of concentrates to create carbonated flavoured beverages. It was popular in the 1970s and 1980s when there were a number of brand name syrups available,[3][4] and, after the company merged with Soda-Club in 1998, it was relaunched with an emphasis on healthier drinks. Soda-Club is currently headquartered in Israel,[5] and has 13 production plants.[6]

In the UK (where it was first sold) the SodaStream machine is strongly associated with 1970s/1980s childhood nostalgia.[7]

The SodaStream drinksmaker is a device which can force carbon dioxide gas (stored under pressure in a cylinder) into water, making it fizzy. The product includes a machine, a carbon dioxide cylinder, and one or more reusable beverage bottles (suitable for pressurizing). The bottle, filled with water, is threaded onto the machine, and with a button push, compressed CO2 from the cylinder is injected, creating carbonated water. Varieties of concentrated syrups are available, to create regular or diet soft drinks by adding a small amount of concentrate to the bottle after carbonation. When a cylinder is empty, it is returned to a supplier and a replacement cylinder is rented.

By using the appropriate variety of concentrate, different flavours of soft drink can be created. During its heyday, several famous brands were available in SodaStream concentrate form including Tizer, Fanta, Sunkist and Irn-Bru.[8]

Milkstream was a variation on the SodaStream for making milkshakes, created by the same company. The ingredients (milk, ice cream and Crusha syrup) were mixed in a tall glass and inserted into the machine, so that the wand extended into the glass to froth up the shake.

Pressurized carbon dioxide canisters are available to consumers for a variety of applications, including paintball, welding, and fire extinguishers, and local vendors will refill them at low cost. Sodastream machines are not compatible with these canisters, nor are local CO2 vendors generally permitted to refill Sodastream canisters ("carbonators"), which include a proprietary valve designed to defeat refilling.[9] Additionally, Sodastream does not sell their CO2 canisters to consumers, but only lends them, and expressly limits how they can be used in their User License Certificate.[10] These mechanisms effectively elevate the cost of refilling a tank to 10 to 20 times the going market rate.[11]

In Sweden in 1984, carbonic acid supplier Sydbrand, primarily a supplier of fire equipment, was sued successfully by Sodastream for trademark infringement for refilling Sodastream-labelled CO2 canisters.[12] More recently, in 2006, Sodastream attempted to sue defendants in Germany for re-selling Sodastream's Alco2jet brand canisters on eBay after purchasing them, but were rejected on the basis that they failed to demonstrate ownership of the canisters.[13] 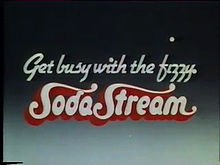 The forerunner of the machine, the "Apparatus for aerating liquids",[14] was created in 1903 by Guy Hugh Gilbey of the London gin distillers, W & A Gilbey Ltd.,[8] and was sold to the upper classes (including the royal household).[3] Flavoured concentrates such as cherry ciderette and sarsaparilla, were introduced in the 1920s, along with commercial carbonation machines,[2][3] and the first machine for home carbonation of drinks was produced in 1955.[8] The SodaStream was originally sold in the UK, but later spread to other countries, including Australia, New Zealand, and Germany.

SodaStream machines were popular during the 1970s and 1980s in the UK, and are associated with nostalgia for that period.[3][4] Their slogan, "Get busy with the fizzy", started as an advertising jingle in 1979 and proved so popular that they added it to their logo. They finally dropped it in 1996 after 17 years,[15] however this was reinstated in 2010 along with a new marketing campaign in the UK.[16]

Although the machines were commercially successful, there was a general perception that some of the soft drinks produced were a poor approximation of their commercial counterparts.[17][18]

Originally the company operated as a subsidiary of W & A Gilbey, Ltd.[8]

In 1985, after various changes of ownership, SodaStream became a wholly owned subsidiary of Cadbury Schweppes, although it operated as an autonomous business within the group.[8] In 1998 SodaStream was bought by Soda-Club, an Israeli company founded in 1991 by Peter Wiseburgh, who from 1978 to 1991 had been Israel's exclusive distributor for SodaStream, creating the world's largest home carbonation systems supplier.[2][19] In 2003 Soda-Club closed the SodaStream factory in Peterborough, moving the company's gas cylinder refilling and refurbishment department to Germany.[20] Under the ownership of Soda-Club the brand has been relaunched in many markets with new machines, and new flavours, as of 2007[update] being available in the United States, The Netherlands, Belgium, Sweden, Denmark, Finland, Germany, Italy, Norway, Iceland, Australia, New Zealand, Canada and South Africa.

Soda-Club still markets its drinks under the SodaStream brand in some countries, its application for the trademark "soda-club" having been successfully opposed in 1998 by Cantrell & Cochrane (Belfast) Ltd, owner of the trademark "club soda".[21]

Instead of the soft-drinks approach of the past several decades, SodaStream today addresses the growing health awareness with a wide range of diet concentrates (sweetened with Splenda) and is used as much for plain sparkling water as for soft drinks.

In January 2011, Who Profits From Occupation published a report about Sodastream's facility in Mishor Adumim, an Israeli industrial zone in the West Bank, which is not widely considered Israeli territory. There is controversy about the products being labeled as made in Israel. The report claims labor abuses, the use of land expropriation to benefit SodaStream and other companies, and the deceptive practice of labeling products made in occupied territories as made in Israel. Sodastream's CEO, Daniel Birnbaum, replied that the report is biased, and that SodaStream products sold in Sweden are made in China, not Israel. He added that closing the plant in the West Bank would "do nothing good for the 160 Palestinian families who depend on it for employment".[22] This came on the back of a sizable movement in Sweden, SodaStream's largest selling market, calling on the company to stop doing business in the occupied territories.[23]

In 2010 the European Court of Justice ruled that its products manufactured in Israeli-occupied territories were not subject to the preferential import duty treatment as goods manufactured within Israel[24].

SodaStream has 13 production facilities worldwide, including a new one in the Israeli industrial zone of Alon Tavor, that began operation on June, 2011. Another manufacturing facility is being constructed near the Lahavim junction just north of Beersheba, Israel, with an investment of €30 million in the new factory.[6]