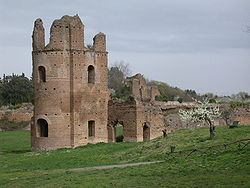 Ruins of the Circus of Maxentius 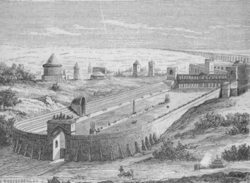 Circus of Maxentius in ancient times

The Circus of Maxentius (known until the 19th century as the Circus of Caracalla) is an ancient structure in Rome, Italy; it is part of a complex of buildings erected by emperor Maxentius on the Via Appia between AD 306 and 312. It is situated between the second and third miles of the Via Appia between the basilica and catacombs of San Sebastiano and the imposing late republican tomb of Caecilia Metella, which dominates the hill that rises immediately to the east of the complex.

The Circus itself is the best preserved of all Roman circuses, and is second only in size to the Circus Maximus in Rome.[1] The only games recorded at the circus were its inaugural ones and these are generally thought to have been funerary in character.[2] They would have been held in honour of Maxentius' son Valerius Romulus, who died in AD 309 at a very young age and who was probably interred in the adjacent cylindrical tomb (tomb of Romulus). The imperial box (pulvinar) of the circus is connected, via a covered portico, to the villa of Maxentius, whose scant remains are today obscured by dense foliage, except for the apse of the basilical audience hall, which pokes out from the tree tops.

The circus is constructed, after the fashion of many Roman buildings of this period, in concrete faced with opus vittatum.[3] The putlog holes which held the scaffolding are evident in many places in the walls, which stand several metres high in places. The modern-day visitor enters the circus from the west end, where the remains of the two still imposing towers are located. These would have contained the mechanism for raising the carceres (starting gates), which were positioned on an arcuated course between the towers. Once out of the gates, the chariots would race down the track, the full 503 m length of which can still be seen. The track was excavated in the 19th century by Nibby, whose discovery of an inscription to the 'divine Romulus' led to the circus being positively identified with Maxentius.[4] The spina, the barrier running down the middle of the track, is exactly 1000 Roman feet (296 m) long, and would have been cased in marble. Its many ornaments, including cones, metae and obelisks, would have cast strange, Piranesi-esque shadows across the track in the late afternoon sun. In the centre stood the Obelisk of Domitian which Maxentius presumably had moved from the Isaeum as part of the tribute to his son. Covered in hieroglyphs and lying broken in five pieces it was much discussed during the Renaissance and engraved by Etienne du Perac among others. The Collector Earl of Arundel paid a deposit for the pieces in the 1630s and attempted to have them removed to London but Urban VIII forbad its export and his successor Innocent X had it erected in the Piazza Navona by Bernini.[5] The track's outer walls were laid out to be wider at the start to allow the racers to spread out before reaching the spina, and were also made wider at the point of the turn, which accommodated the turning circle of the chariots. At the east end of the track is a small triumphal arch, in which exposed opus vittatum work can be seen. The judges' box was located about two-thirds of the way down on the southern side of the track, where it would have been in clear sight of the finishing line. The imperial box, the remains of which are identifiable, was situated in the usual fashion to give the most dramatic views of the race. Directly opposite the imperial box, in the south track wall, there is a small arch, through which can be seen the Tomb of Caecilia Metella. From the height of the box the tomb would have been entirely visible, and it has been argued that the circus, which is curiously positioned relative to contemporary and existing structures, was purposely skewed in order to integrate the tomb into the Maxentian architectural scheme[6]

The circus-complex of Maxentius as originally conceived can be partly understood as an elaborate imperial version of the type of elite residences that appear in Rome and throughout the provinces in late antiquity, whose pretensions are evidenced in the regular presence of large audience halls, familial tombs and circus-shaped structures - the Villa Gordiani, also in Rome, and the complex at Piazza Armerina in Sicily, are two examples.[7][8] The progenitor of these residences was of course the Palatine complex in Rome, where Maxentius himself made some alterations to the palace in which he played out public life.[9] The most instructive imperial parallel for the Via Appia complex is that of Maxentius's contemporary Galerius at Thessaloniki, though Diocletian's palace at Split furnishes some useful comparisons.[10]

The complex may well have changed in use and character following the death of Romulus; the mausoleum, surely intended for Maxentius himself, as were the mausolea built by Galerius and Diocletian intended for themselves whilst still alive, now received as its occupant Maxentius' only son.[10] The inaugural games became funeral games, and these, like the circus, were dedicated to the now deified Romulus. The pervasive emphasis of death and apotheosis has led to the argument that the whole complex became overwhelmingly funerary in character from this point, and that the memorial references generated by Romulus extend, spatially and ideologically, to the heart of Rome.[6]

The circus is under the care of the Soprintendenza Archeologia di Roma, and is open to the public. It is accessible via a bus which runs regularly from the metropolitana stop called Colli Albani. The most up-to-date guides, in English and Italian, are provided by Coarelli, but Claridge's account is also clear and succinct, as well as being relatively recent. For in-depth research and references, volume one of Steinby's Lexicon Topographicum Urbis Romae is the starting point.[11][12][13][14]