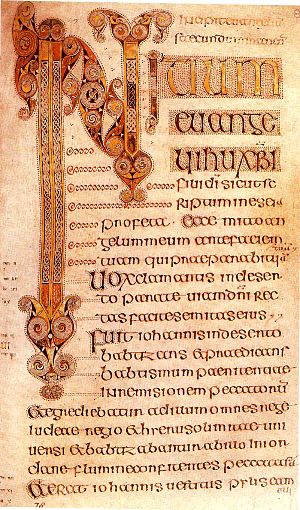 The beginning of the Gospel of Mark from the Book of Durrow.

The Book of Durrow (Dublin, Trinity College Library, MS A. 4. 5. (57)) is a 7th-century illuminated manuscript gospel book in the Insular style. It was probably created between 650 and 700, in Northumbria in Northern England, where Lindisfarne or Durham would be the likely candidates, or on the island of Iona in the Scottish Inner Hebrides. The subject has been intensely debated by scholars for many decades, but without any common consensus emerging.[1] Like the Book of Kells, if it was not always in Ireland it was taken there, perhaps by monks fleeing the Viking attacks on Britain, and was certainly at Durrow Abbey by 916.

It is the oldest extant complete illuminated Insular gospel book, for example predating the Book of Kells by over a century. The text includes the Gospels of Matthew, Mark, Luke and John, plus several pieces of prefatory matter and canon tables. Its pages measure 245 by 145 mm and there are 248 vellum folios. It contains a large illumination programme including six extant carpet pages, a full page miniature of the four evangelists' symbols, four full page miniatures, each containing a single evangelist symbol, and six pages with significant decorated initials and text. It is written in majuscule insular script (in effect the block capitals of the day), with some lacunae.

The page size has been reduced by subsequent rebindings, and most leaves are now single when unbound, where many or most would originally have been in "bifolia" or folded pairs. It is clear that some pages have been inserted in the wrong places. The main significance of this is that it is unclear if there was originally a seventh carpet page. Now Matthew does not have one, but there is, most unusually, one as the last page in the book. Perhaps there were only ever six: one at the start of the book with a cross, one opposite the opposite the next page with the four symbols (as now), and one opposite each individual symbol at the start of each gospel.[2] Otherwise the original programme of illumination seems to be complete, which is rare in manuscripts of this age.

In the standard account of the development of the Insular gospel book, the Book of Durrow follows the fragmentary Northumbrian Gospel Book Fragment (Durham Cathedral Library, A. II. 10.) and precedes the Book of Lindisfarne, which was begun around 700. 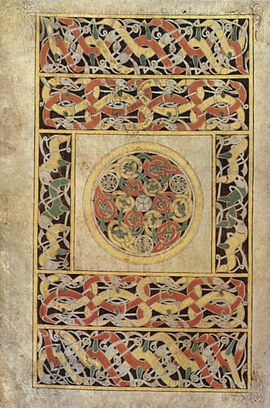 The illumination of the book shows especially well the varied origins of the Insular style, and has been a focus for the intense art-historical discussion of the issue. One thing that is clear is that the artist was unused to representing the human figure; his main attempt, the Man symbol for Matthew, has been described as a "walking buckle".[3] Apart from Anglo-Saxon metalwork, and Coptic and Syriac manuscript illustrations, the figure has been compared to a bronze figure with a panel of geometric enamel on his trunk, from a bucket found in Norway.[4] The artist is clearly far more used to depicting animals, and these have close relationships to continental eagle fibulae for the eagle, Pictish stones and English metalwork for the "shoulder spirals" on the lion and ox.

The geometric borders and the carpet pages cause more disagreement. The interlace, like that of the Durham fragment, is mostly large compared to the Book of Lindisfarne, but the extreme level of detail found in later Insular books begins here in the Celtic spirals and other curvilinear decoration used in initials and in sections of carpet pages. The page illustrated at left has animal interlace around the sides that is clearly drawn from Germanic Migration Period Animal Style II, as found for example in the Anglo-Saxon jewellery at Sutton Hoo. But the circular panel in the centre seems, although not as precisely as other parts of the book, to draw on Celtic sources, although the three white circles at the edge again recall Germanic metalwork studs in enamel or otyher techniques.

The Book of Durrow is unusual in that it does not use the traditional scheme for assigning the symbols to the Evangelists. Each Gospel begins with an Evangelist's symbol – a man for Matthew, an eagle for Mark (not the lion traditionally used), a calf for Luke and a lion for John (not the eagle traditionally used). Each evangelist symbol, except the Man of Matthew is followed by a carpet page, followed by the initial page. This missing carpet page is assumed to have existed. A first possibility is that it was lost, and a second that it is in fact folio 3, which features swirling abstract decoration.

The first letter of the text is enlarged and decorated, with the following letters surrounded by dots. Parallels with metalwork can be noted in the rectangular body of St Matthew, which looks like a millefiori decoration, and in details of the carpet pages.

There is a sense of space in the design of all the pages of the Book of Durrow. Open vellum balances intensely decorated areas. Animal interlace of very high quality appears on folio 192v. Other motifs include spirals, triskeles, ribbon plaits and circular knots in the carpet pages and borders around the Four Evangelists.

The colophon of the book (f. 9r) contains an erased and overwritten note which, according to one interpretation, is by "Colum" who scribed the book, which he said he did in twelve days. This probably relates to the belief that Colum Cille (Saint Columba) had created the book, and its date and authenticity is unclear. Twelve days is a plausible time to scribe one gospel, but not four, still less with all the decoration.[5] The earliest known cumdach, or metalwork reliquary for a book (probably an Irish innovation), was made to house and protect the Book of Durrow at the behest of King of Ireland Flann Sinna (879-916), by which point it was at Durrow, and believed to be a relic of Colum Cille. The shrine was lost in the 17th century, but its appearance, including an inscription recording the king's patronage, is recorded in a note from 1677, now bound into the book as folio IIv, although other inscriptions are not transcribed. Once in the shrine it was probably rarely if ever removed for use as a book.[6]

In the 16th century, when Durrow Abbey was dissolved, the book went into private ownership. It was borrowed and studied by James Ussher, probably when he was Bishop of Meath from 1621-1623. It managed to survive during that period despite at least one section of it being immersed in water by a farmer to create holy water to cure his cows. In the period 1661 to 1682 it was given to the library at Trinity College, together with the Book of Kells, by Henry Jones while he was Bishop of Meath. This was in time for the shrine and cover to be lost during the occupation by troops in 1689.[7]

The five pound note of the "Series B" Irish banknotes contained an image from the book.