America Must Be Destroyed

America Must Be Destroyed 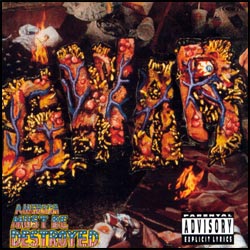 "America Must Be Destroyed" is 's third album, released in 1992 as their second album on . The album's lyrical content was inspired by controversy over charges against the band and an incident in in which frontman 's prosthetic penile attachment "The Cuttlefish of Cthulhu" was confiscated by officers.

The lyrical content in America Must Be Destroyed was greatly inspired by Dave Brockie's fight with officers while touring in , in 1992. The controversy revolved around Brockie's rubbery adornment. Brockie was revolted by this attack on his and so he created a revolving around an elite "Morality Squad" that attacked the members of GWAR and stole Oderus's penile attachment (aka Cuttlefish of Cthulu, a phallic hell beast that normally dangles from his crotch). The opening song, "Ham on the Bone" (which has a nod to ) explains this robbery. The story then shifts to GWAR headquarters in , where Oderus's slaves are ordered to shoot up a dinosaur egg with crack. The result is the mighty Gor Gor, a Tyrannosaurus Rex that wreaks havoc on America. Meanwhile, the Morality Squad has enlisted the help of Father Bohab (a priest) to crucify GWAR in the media. GWAR marches out to battle, and you can take the story from there. Other songs of interest include "Have You Seen Me?", "Poor Ole Tom", and "The Road Behind". Musically, it is a mix of rock and roll and blistering , and it is even harsher-sounding than the previous album. A video, "", was released as a supplement to the album's storyline. This album was followed by "The Road Behind", an EP that contained that single and a riveting live version of "Have You Seen Me?" (which contained a notorious sample at the end). The single "S.F.W." (a staple of their live shows) was supposedly released on this album as a bonus track, but this has been discounted by the band.

GWAR fans are referred to as "bohabs," named for Father Bohab ("bohab" literally means "habitually boring," which is the opposite of what GWAR and their fans are - it fits Father Bohab perfectly; GWAR speaks ill of their fans - to their delight - and they have since taken the term as a point of pride).

Father Bohab was never actually on the album - he originally appeared in 1989, along with an early Cardinal Syn. On the Tour de Scum (the corresponding tour to "", the Morality Squad story is introduced. He (Bohab) is played by one of the slaves (according to Chuck Varga's Bohab Central forum posts, it was Bob Gorman; he also went on to say that the voice was his) on tour, but is portrayed by Brad Roberts () in "Phallus in Wonderland" and "It's Sleazy."

"Pussy Planet," the album's closer, was co-written by , and was slated to be a duet with . Though not quite a duet, Slymenstra's voice can still be heard in the song. The opening guitar riff sounds alot like the guitar riff to Rape Me by Nirvana off the "" album.

The Canadian release of this album does not feature "Crack in the Egg," "Have You Seen Me?" and "Rock N' Roll Never Felt So Good," and instead has earlier versions of "Krak Down" and "Bad Bad Men" (both from "") and "O Canada" (according to GWAR, this was included as a way to ridicule Canada for not having the "guts" to include the omitted songs).

is not on this album. Dewey Rowell left the band before recording began, and all of the lead guitars (save for two songs - "Crack in the Egg" and the title track, respectively) were recorded by . To this day, Balsac, not Flattus, will usually play lead when performing songs from this album live. Tim Harriss (of Kepone, the band Michael Bishop left GWAR for) played lead on the album's title track; Lee Harris (from 's old band Rosebud) played lead on "Crack in the Egg". Because of the absence of Flattus, the tour cycle surrounding this album was quite short.

The name of the album may be a reference to the Roman senator Cato, who was famous for ending all of his speeches (regardless of topic) with the line "Furthermore, it is my opinion that Carthage must be destroyed."