Court of the Lions

Court of the Lions 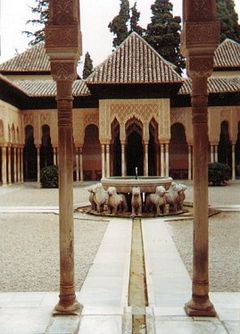 General view of the court. 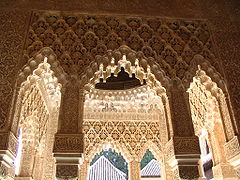 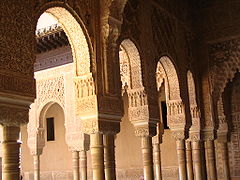 Stilted arches of the gallery.

The Court of the Lions (Spanish: Patio de los Leones - Arabic: بهو السباع‎) is the main court of the Nasrid dynasty Palace of the Lions, in the heart of the Alhambra, the Moorish citadel formed by a complex of palaces, gardens and forts in Granada, Spain. It was commissioned by the Nasrid sultan Muhammed V of the Emirate of Granada in Al-Andalus. Its construction started in the second period of his reign, between 1362 and 1391 AD. The site is now part of the UNESCO World Heritage List[1] and minted in Spain's 2011 limited edition of 2 € Commemorative Coins.

The Palace of the Lions, as well as the rest of the other new rooms built under Muhammad V,[2] like the Mexuar or Cuarto Dorado meant the beginning of a new style, an exuberant mixture of Moorish and Christian influences that has been called Nasrid style. During the period that Muhammad V was ousted as sultane of Granada by his stepbrother, Abu-l Walid Ismail, he discovered in exile a host of new aesthetic influences that were not in the language of his predecessors, not even in his own first contributions to the enrichment of the Nasrid palaces of the Alhambra. In Fes he saw the Almoravid mosque of Qarawiyyin, built by Andalusian architects. The splendor of the decorations, specially the profuse use of the muqarnas that had once decorated the palaces and mosques of Al-Ándalus, stunned the ex-sultan, as did the ruins of the Roman city of Volubilis, where he could directly examine the classical orders, Roman ornamentation and, above all, the disposition of the Roman 'impluvium'; the Roman ruins at Volubilis were particularly well preserved since they had been abandoned for a period of time in the Middle Ages and later constructively re-used as a necropolis.[3] Muhammad became an ally of his personal friend, the Christian king Pedro I of Castile, who helped him to regain the throne and defeat the usurpers. Meanwhile, he was also astonished with the construction of the palace of Pedro I, the Alcázar of Seville, built in Mudéjar style by architects from Toledo, Seville and Granada. The influence of this Mudéjar style of King Pedro in the future Palace of the Lions was going to be decisive, especially the structure and disposition of the Qubba rooms along two axis of the 'Patio de las Doncellas' ("Court of the Maidens").

The Court of the Lions is an oblong court, 35 m in length by 20 m in width, surrounded by a low gallery supported on 124 white marble columns. A pavilion projects into the court at each extremity, with filigree walls and light domed roof, elaborately ornamented. The square is paved with coloured tiles, and the colonnade with white marble; while the walls are covered 1.5 m up from the ground with blue and yellow tiles, with a border above and below enamelled blue and gold. The columns supporting the roof and gallery are irregularly placed, with a view to artistic effect; and the general form of the piers, arches and pillars is most graceful. They are adorned by varieties of foliage, etc.; about each arch there is a large square of arabesques; and over the pillars is another square of filigree work. In the center of the court is the celebrated Fountain of Lions, a magnificent alabaster basin supported by the figures of twelve lions in white marble. At present, the fountain is under restoration in an effort to preserve its integrity. The lions surrounding the basin have been temporarily removed for their accurate restoration, and a large wooden and glass structure has been erected around the fountain to shield it from the elements during the process.[4]

Meaning of the structure

The structure of the court, has, as it has been said, a direct influence of the Sevillian Patio de las Doncellas, but its meaning and origins connect with the Persian gardens that is root of the Islamic gardening, the court divided in four parts, each one of them symbolizing one of the four parts of the world. Each part is irrigated by a water channel that symbolize the four rivers of Paradise. This court is, therefore, an architectural materialization of Paradise, where the gardens, the water, and the columns form a conceptual and physical unity. The slender column forest have been said to represent the palm trees of an oasis in the desert, deeply related with Paradise in the Nasrid imagination. In the poem of Ibn Zamrak on the basin of the fountain, a further meaning is stated clearly: "The fountain is the Sultan, which smothers with his graces all his subjects and lands, as the water wets the gardens."

Nowadays the flower garden has been substituted by a dry garden of pebbles, in order not to affect the foundation of the palace with the watering. In Nasrid times, the floor of the quartered planting beds was slightly lower than the general level, and the visual effect was like a tapestry of flowers, as the top of the plants were cut to the same level of the court, and these were carefully chosen to cover a host of color nuances.

The Fountain of the Lions

The origin and meaning of the Fountain of the Lions has generated many legends, mainly due to its unusual themes for a Muslim palace: twelve figurative lions. The Fountain from the XI Century is a jewish fountain, part of the Naghrela palace's destroyed after 1066 Granada massacre . The fountain and the lions had a model in the Fountain of the Temple of Solomon, described in the Books of Chronicles of the Old Testament[5] The parallels are explicit in a poem of the Hispano-Hebrew Ibn Gabirol, which is a tissue of quotes and parallels of the Hebrew Bible: 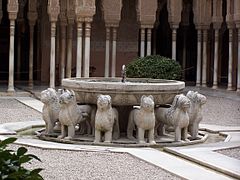 The Fountain of the Lions.

...and there is a full sea, matching Solomon's sea

"There is a pond, like the Sea of Solomon
It doesn't rest over bulls
but over lions arranged in circles:
They seem to roar to their prey.
Water flows from their mouth without end,
it springs like the torrents of a stream.
It runs to their feet through channels
arranged like open drainpipes under the Sun
to irrigate the bloomed parterres.
Their limpid streams flood the grass
They want to refresh the Garden of the Myrtles!
They elevate themselves over clouds just up to the top of the trees
and they scatter balsamic perfumes
smelling just like the scent of the myrtles and the incense.
The birds chirp on the branches,
looking beneath the date palm trees.
The flowers form lusty private open rooms
of rose, narcissus and camphor tree scents.
Their varieties are countless!"[6]

The lions were re-used, taken from the Palace of Joseph Ibn Naghrela, vizier of the Kingdom of Granada and son of Samuel ibn Naghrela. The basin was changed when Mohammed V moved the fountain to its definitive location: the poet and minister Ibn Zamrak was commanded to write a poem to describe the beauty of the courtyard. It was going to be carved around the border of the new basin.

Excerpt of Ibn Zamrak's poem on the basin

"...Such a translucent basin, sculpted pearl!
Argentic ripples are added on it by the quiet dew
And its liquid silver goes over the daisies, melted, and even purer.
Hard and soft are so close, that it would be hard to distinguish
liquid and solid, marble and water. Which one is running?
Don't you see how water overflows the borders
and the warned drains are here against it?
They are like the lover who in vain
tries to hide his tears from his beloved..."