Coat of arms of British Columbia

Coat of arms of British Columbia 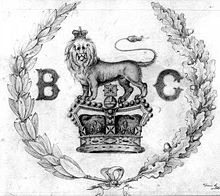 The royal crest of British Columbia.

The first heraldic provincial symbol was the Great Seal of the province, being the royal crest of the crowned lion upon the imperial crown as was the usual practice for British colonies, but with the letters "BC" added. This was used upon British Columbia joining Confederation.[1]

The first coat of arms of the province was created by Canon Arthur Beanlands of Victoria, whose version was similar to the modern one: "The union device of Great Britain and Ireland: on a chief barry undée argent and azure, a setting sun in base Or."[3] This coat was adopted by Order-in-Council 268 July 19, 1895, as the Arms and Great Seal of the Province per the authority inferred from Section 136 of the British North America Act. Upon the Order in Council, the motto of the province is typeset incorrectly as "Spendor Sine Occasu" which is one of several hand-made corrections and deletions upon the instrument.

While the design of the Great Seal was a provincial prerogative, coats of arms were (and are) honours granted by the Sovereign. The province attempted to register the design with the English College of Arms in 1897, but was unable to do so for several reasons. First among them was the use of the royal crest, which is the exclusive right of the sovereign and could not be granted to another entity even as a sign of utmost loyalty to the Queen. The heralds objected to the placement of the Union Flag in an inferior position on the shield (conflicting with the popular slogan, "The sun never sets on the British Empire"). The use of supporters, a high honour, was considered presumptuous, as no other province had been granted such a privilege.[1]

The shield only (with the positions of the Union Flag and setting sun reversed, and with the antique crown added), along with the motto, was granted in 1906. The achievement of arms was augmented with a crest, supporters, and compartment granted by Queen Elizabeth II, on 15 October 1987.[2][1] 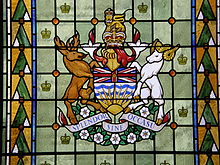 The crest is the Queen's royal crest (a gold lion statant gardant—standing on all fours and facing the viewer—wearing the royal crown), differenced with a garland of Pacific Dogwood, the provincial flower.

The shield features a Union Flag in chief, with a crown (known heraldically as an antique crown) at its centre. In base it has the sun setting into the ocean, representing the province's location on the Pacific.

The compartment is a garland of Pacific Dogwood.

The supporters are an elk stag and a bighorn sheep. The wapiti of Vancouver Island and the bighorn sheep of the mainland of the province symbolize the union of the two colonies which united to form British Columbia in 1866.

The motto Splendor Sine Occasu, is written in Latin and essentially means "splendour without diminishment" or "beauty without end."[1]