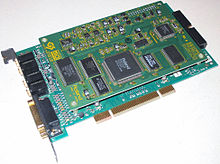 A sound card with a MIDI daughterboard attached 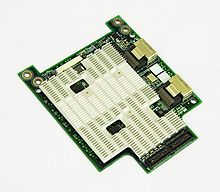 A daughterboard, daughtercard or piggyback board is a circuit board meant to be an extension or "daughter" of a motherboard (or 'mainboard'), or occasionally of another card. In particular, daughterboards often have plugs, sockets, pins, connectors, or other attachments for other boards, which is what differentiates them from a standard expansion board such as for PCI or ISA. In addition, daughterboards usually have only internal connections within a computer or other electronic device rather than any external ones, and usually access the motherboard directly rather than through a computer bus.

Daughterboards are sometimes used in computers in order to allow for expansion cards to fit on their side (or upright), parallel to the motherboard, usually to maintain a small or slim form factor. In this case they can also be called riser cards, or risers. Daughterboards are also sometimes used to expand the basic functionality of an electronic device, such as when a certain model has features added to it and is released as a new or separate model. Rather than redesign the first model completely, a daughterboard may be added to a special port or connector on the motherboard or mainboard. These usually fit on top of and parallel to the board, separated by spacers or standoffs, and are therefore sometimes called mezzanine cards due to being stacked like the mezzanine of a theatre. Wavetable cards are often mounted on sound cards in this manner.

Use of the names daughter card and daughter board, and even mezzanine board are also acceptable.