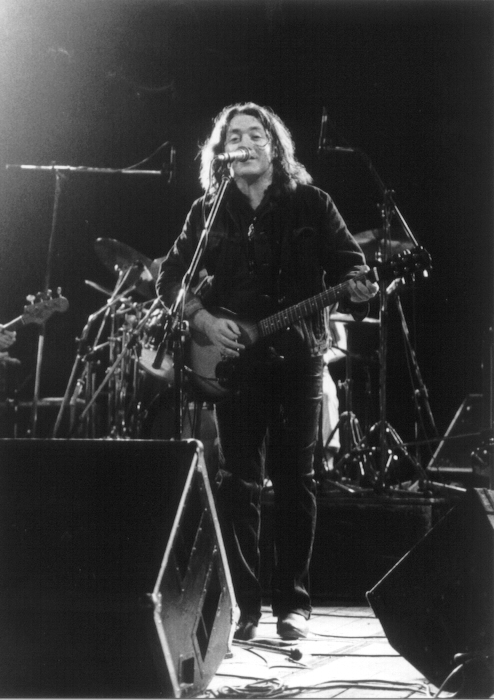 Rory Gallagher (2 March 1948&ndash;14 June 1995) was an Irish /rock Born in , , Ireland, he grew up in in the south of the country. He is best known for his solo work on several albums, and for his tenure in Taste during the late 60s. Rory Gallagher's albums sold in excess of 30 million copies worldwide. [ [http://www.ridingshotgun.co.uk/extract.html Prologue: Can't believe it's True, retrieved 26 March, 2008] ] [ [http://www.irishconnectionsmag.com/archives/v3i3/g.htm Irish Connectionsmag] ]

Gallagher's first bands were s which played the popular hits of the day. In 1965 he turned The Impact into an R'n'B group which played gigs in Ireland and Spain. He formed Taste in 1966, but the line-up which gained fame was formed in 1967, featuring Gallagher on guitar and vocals, John Wilson on drums and Richard McCracken on bass. The group released the albums, "Taste" and "On the Boards", and made two live recordings, "Live at Montreux" and "Live at the Isle of Wight". The latter appeared long after the band's break-up, which occurred shortly after their appearance at the 1970 Isle of Wight Festival.

After the break-up of Taste, Gallagher toured under his own name, hiring bass player to play on his first eponymous album (a relationship that would last twenty years on the road) and Wilgar Campbell on drums.

The 1970s were Gallagher's most prolific period. He produced ten albums in that decade, including two live albums, "Live in Europe" and "Irish Tour '74", which for many best captured his bands' raw and naturally dynamic qualities.Fact|date=June 2007. In 1972 he released the album "Deuce", which is essentially three-piece R&B. Also in 1972 he was voted ""'s Top Musician of the Year, dethroning . [ [http://www.innerviews.org/inner/rory.html Defender of the blues] ] His album "Live in Europe" has been a big selling album not only in Ireland but also internationally.

Gallagher played and recorded what he said was "in me all the time, and not just something I turn on ...". Though he sold over thirty million albums world wide, it was his marathon live performances that won him greatest acclaim.

The line-up including on drums and on keyboards stayed together between 1973 and 1978. Other release highlights from that period include "Against the Grain", the jazz-tinged "Calling Card" album (assisted in production by (bassist with ) and the hard blues-rocking "Photo Finish" and "Top Priority" albums.

A dedicated follower of blues music, Gallagher played with many of the genre's biggest stars, collaborating with and on their respective "London Sessions" in the mid 70s. Gallagher was also invited to tryout with following the resignation of and with after the departure of "The Eagle". He was 's second choice (after ) to replace in Deep Purple.

In the 1980s he continued recording, albeit at a slower pace, producing "Jinx", "Defender", and "Fresh Evidence". These albums progressed towards a more mature blues style. After "Fresh Evidence", he embarked on a successful tour of the United States.

Gallagher's health and his ability to perform were increasingly compromised by excessive use of alcohol, combined with drugs that had been prescribed to alleviate his anxiety about flying.Fact|date=February 2008 From the late 1980s, he suffered increasingly poor health, yet he continued touring. By the time of his final performance on 10 January 1995 in the Netherlands, he was visibly unwell. A liver transplant became necessary and was nearly successful, but just before being discharged from the hospital, an MRSA infection developed.Fact|date=February 2008 His health quickly worsened and he died in London on 14 June 1995, leaving no wife or children.

Gallagher's final resting place is in St Oliver's Cemetery, on Model Farm Road just outside near Cork City, Ireland. His headstone is a replica of an award he received in 1972 for International Guitarist of The Year.

In 2003, "Wheels Within Wheels", a collection of acoustic tracks, was released posthumously by Gallagher's brother Donal Gallagher. Collaborators on this album included Bert Jansch, Martin Carthy, and .

Many modern day musicians, including from , Slash of , of , of , of and of Queen [http://www.modernguitars.com/archives/000931.html] , cite Gallagher as an inspiration in their formative musical years.Fact|date=February 2008

Gallagher was always associated with his well-worn sunburst 1961 (Serial Number 64351), which his brother Donal has officially retired. It was reputedly the first in Ireland, ordered by a member who changed his mind about the colour. Gallagher bought it for just shy of £100 at Crowley's Music Store on Cork's McCurtain Street. The guitar was extensively modified by Gallagher. The tuning pegs, for a start, are odd (5 Sperzels and one Gotoh), and all of these have been found to be replacements. Secondly, it is thought Fact|date=July 2008 that the nut has been replaced and interchanged a number of times. Thirdly, the scratchplate was changed during Gallagher's time with Taste. Another change was the pickups of which none are original. The final modification was that of the wiring. Gallagher disconnected the bottom tone pot and rewired it so he had just a master tone control along with the master volume control. He also installed a 5-way selector switch in place of the vintage 3-way one. The most notable effect that years of touring have had is the almost complete removal of the guitar's original sunburst finish, partly through being left out in the rain in a ditch for days after being stolen,Fact|date=February 2008 and partly due to the fact that Rory's blood type had a very acidic quality Fact|date=July 2008, which affected the guitar's finish when he sweated while on stageFact|date=February 2008. Other quirks include a 'hump' in the scratch plate which moves the neck pickup closer to the neck on the bass side and a replacement of all of the pickups, though this replacement was due to damage rather than a perception of a tonal inadequacy. Reproductions of the guitar have recently been sold by Fender, though with smaller frets and lower action than the original. [ [http://www.rory.de/guitar.html Rory Gallagher:Equipment] ]

Gallagher owned a number of other instruments, including:

SilvertoneThis guitar was bought for $15 from a pawnshop. It was often used in Gallagher's live set to play "Cradle Rock" and "A Million Miles Away".

This guitar dating to 1959 was heavily modified. It started off as a stock Esquire in cream and ended up as a black Telecaster. At one point in between, Gallagher put a Strat pickup in the middle position and added a 5-way selector.

Seen in the above picture.

(1967)This was very similar to the Esquire after the Esquire had undergone all of its modifications. It can be seen in action on Gallagher's "Live at " in the song "Bullfrog Blues".

Acoustic GuitarsHis main acoustic guitar was a Martin D-35. In his later years, he used an Electro-Acoustic Takamine (a prototype model given to him by Takamine while he was touring Japan) that was much easier to amplify in a live context.

Martin MandolinThis was used most famously in Gallagher's joint effort with , "Goin' To My Hometown".

National Resonator (1932)Gallagher used this to play blues standards and acoustic sets and often used a heavy steel slide with it.

Other InstrumentsGallagher also played the , showcased on the song "On The Boards" by Taste, and , which can be heard on the songs "I'm Not Surprised" and "I Could've Had Religion".

Gallagher used various makes and models of amplifiers during his career. In general, however, he preferred smaller 'combo' amplifiers to the larger, more powerful 'stacks' that are popular with rock and hard rock guitarists. To make up for the relative lack of power on stage, he would often link several different combo amps together.

When Gallagher was with Taste, he used a single Vox AC30 with a Dallas Rangemaster treble booster plugged into the 'normal' input. Examples of this sound can be heard on the Taste albums, as well as the album "Live in Europe". , of the band Queen, has admitted in interviews that as a young man, he was inspired to use a similar amplifier and treble booster setup after meeting Gallagher and asking him how he got his sound. Gallagher has also been known to have used s and various Boss effects.

In the early to mid 1970s, Gallagher began to use Fender amplifiers, most notably a Bassman and a Twin, both of a 50s vintage. An example of this sound can be heard on the "Irish Tour '74" album. He also had a Fender Concert amplifier.

In the mid to late 1970s, when Gallagher was moving towards a hard rock sound, he experimented with VT40 and VT22 amps. He also began using Marshall combos. During this period and beyond, Gallagher used different combinations of amps on stage to achieve more power and to blend the tonal characteristics of different amps including Orange amplification.