Microphyll
This article is about leaf vasculature and evolution. For other uses, see Microphyll (disambiguation). 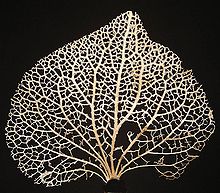 The terminology of fossil plants is in places a little confusing. In the discipline's 200+ year history, certain concepts have become entrenched, even though improved understanding has threatened the foundations upon which they are based. The traditional definition of microphylls and megaphylls will be discussed in this article for simplicity; their merits will be discussed later.

Traditionally, a microphyll is "an appendage supplied by a single, unbranched vein".[1] Despite their name, microphylls are not always small; those of Isoëtes can reach centimetres in length, and the extinct Lepidodendron bore microphylls over a metre long.[citation needed] In the classical concept of a microphyll, this vein emerges from the protostele, without leaving a leaf gap. Leaf gaps are small areas above the node of some leaves where there is no vascular tissue, as it has all been diverted to the leaf. Megaphylls are characterised by multiple venation. By this definition, the Psilotopsids, Lycopods and Equisetum have microphylls, as all extant individuals only bear a single vascular trace in each leaf.[2] 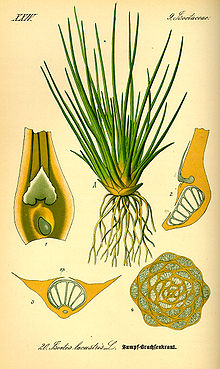 The "Enation theory" of microphyll development posits that small outgrowth, or enations, developed from the side of early axes (such as those found in the Zosterophylls).[3] Outgrowths of the protostele later emerged towards the enations (as in Asteroxylon),[3] and eventually continued to grow fully into the leaf to form the mid-vein (such as in Baragwanathia[3]).[1] The fossil record appears to display these traits in this order,[3] but this may be a coincidence, as the record is very incomplete: microphylls may have originated by the reduction of a webbed telome branch.[3]

Unfortunately, the simplistic models described above do not hold true for all organisms. Some genera of ferns display complex leaves which are attached to the pseudostele by an outgrowth of the vascular bundle, leaving no leaf gap.[1] Horsetails (Equisetum) bear only a single vein, and appear to be microphyllous; however, in the light of the fossil record, we conclude that their forbears bore leaves with complex venation, and the current state is a result of secondary simplification.[4] Some gymnosperms bear needles with only one vein, but the gymnosperms evolved later from plants with complex leaves.[1] 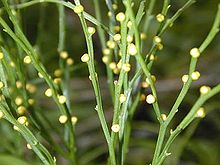 An interesting case is that of Psilotum, which bears a protostele, and enations devoid of vascular tissue. Consequently, Psilotum was long thought to be a "living fossil" closely related to early land plants (Rhyniophytes). However, genetic analysis has shown Psilotum to be a reduced fern.[5]

To make matters worse, there is also some debate about whether leaf gaps are unique and/or common to megaphyllous organisms.[1]

This ambiguity leaves it difficult to distinguish between two competing hypotheses: that microphylls evolved via the reduction of megaphylls, and that they evolved independently, from enations. While the simple definitions (microphylls: one vein, macrophylls: more than one) can still be used in modern botany, the evolutionary history is harder to decipher.