The Freedom From Religion Foundation (FFRF) is an American freethought organization based in Madison, Wisconsin. Its purposes, as stated in its bylaws, are to promote the separation of church and state and to educate the public on matters relating to atheism, agnosticism and nontheism. The FFRF publishes the newspaper Freethought Today. The organization pursues public-interest lawsuits and engages in public debates to further its goals. Since 2006, the Foundation has produced the Freethought Radio show, currently the only national freethought radio broadcast in the United States.

The FFRF was co-founded by Anne Nicol Gaylor and her daughter, Annie Laurie Gaylor, in 1976 and was incorporated nationally in 1978.[2] The organization is supported by over 13,000 members and [1] operates from an 1855-era building in Madison, Wisconsin that once served as a church rectory. Annual membership fees start at $40. According to the 2007 IRS tax Form-990 found on Guidestar.org, the foundation has a fund balance of over $5.5 million (US) and received over $581,000 (US) in membership dues. The foundation uses this money primarily to pay legal fees in cases supporting the separation of church and state that involve governmental entities, but it also has a paid staff of four, distributes advertisements and sends news publications to members.[2]

Annie Laurie Gaylor, co-president of the Freedom from Religion Foundation, is the author of Women Without Superstition: No Gods - No Masters (ISBN 1-877733-09-1) and edits the FFRF newspaper Freethought Today. Her husband, Dan Barker, author of Losing Faith in Faith: From Preacher to Atheist (ISBN 1-877733-07-5) is a musician and songwriter, a former Pentecostal Christian minister, and co-president of the FFRF. 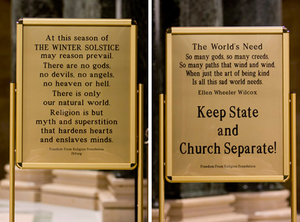 Front (left) and back (right) of sign displayed at the Wisconsin State Capitol. The sign in Washington displays the same message.

The FFRF maintains a sign in the Wisconsin State Capitol during the Christmas season, which reads:[10] 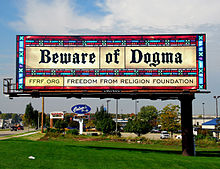 A plaque with the same text as the Wisconsin State Capitol sign was displayed for the 2008 Christmas season at the state capitol in Olympia, Washington, next to a nativity scene.[11][12] The sign was stolen and then later found and returned to the state capitol.[13] The addition of the sign incited a large number of individuals and groups to request other additions, such as a Festivus pole,[14] a request by the Westboro Baptist Church for a sign stating "Santa Claus will take you to hell" (among other things),[15] a sign paying homage to the Flying Spaghetti Monster,[15] and many others. The sudden influx of requests led Catholic League president Bill Donohue to weigh in harshly,[16] and has led many to call for a removal of all religious material whatsoever in the state capitol.

On December 23, 2009, conservative activist and candidate for Illinois Comptroller, William J. Kelly, attempted to remove a FFRF sign at a holiday display.[17]

Called the "only weekly Freethought radio broadcast anywhere", Freethought Radio on The Mic 92.1 FM is live every Saturday from 11 a.m. - 12 p.m. CDT in Madison, Wisconsin. It also appeared on Air America (Air America Radio ceased operation in March, 2010). It is hosted by the co-presidents of FFRF, Dan Barker and Annie Laurie Gaylor. A podcast archive is also available at the FFRF website. Regular features include "Theocracy Alert" and "Freethinkers Almanac". The latter highlights historic freethinkers, many of whom are also songwriters. The show's intro and outro make use of John Lennon's "Imagine", which is notable for its antireligious theme.