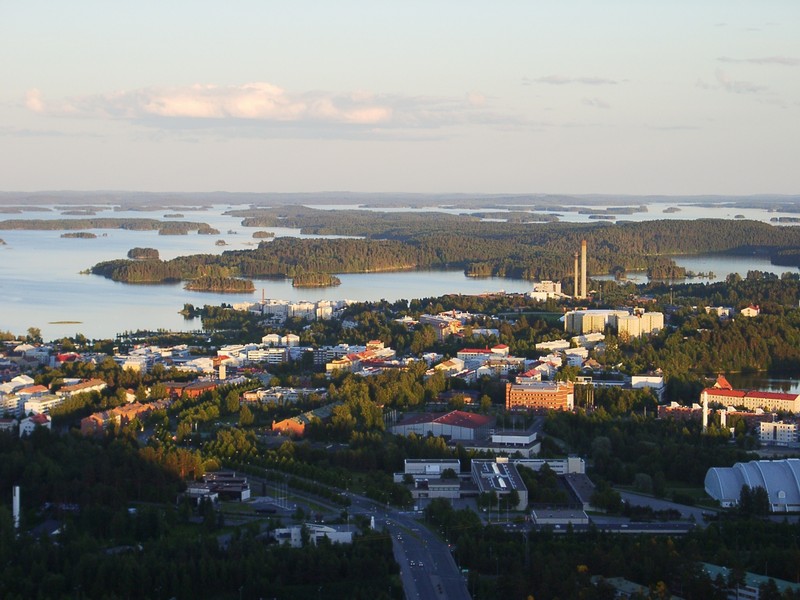 Kuopio is a Finnish and located in the province of and the region of . A population of 91,000 makes it the eighth biggest city in the country. The city has a total area of 1,730 , of which 805 km² is water and half forest. The is only 52 inhabitants/km², but the center of the city is populated very densely, even comparable to the metropolitan area. The population of the entire Kuopio region is 119,472 (source: "Kuopion Kaupunkilehti", , bottom of page 4).

The city is surrounded by lake , and several parts of it are built on islands. Kuopio is known for its association with a national delicacy, Finnish fish pastry (), and the dialect of Savo, as well as the hill of and the . Besides being a very popular outdoor recreation area, Puijo serves also as a stage for a yearly World Cup ski jumping competition.

Transport connections to Kuopio include trains and air service from and .

Kuopio has always been a school town. Some of the first schools offering education in Finnish (such as the School for the Blind in 1871, and the Trade School in 1887) were established in Kuopio. Currently the most important institutions are the , the , Vocational College of Northern Savonia and the Kuopio department of the .

Kuopio is known as a strong center of health (it has the biggest yearly enrollment rate of medical students in Finland), pharmacy, environment, food & nutrition (all legalized Clinical and Public Health Nutritionists in Finland graduate from the University of Kuopio), safety (education in Emergency Services is centered in Kuopio [http://www.pelastusopisto.fi] ) and welfare professions, as the major organisations University of Kuopio, Savonia University of Applied Sciences and Technology Centre Teknia are particularly oriented to those areas.There are about 3,800 enterprises in Kuopio, of which approximately 150 are export companies. These provide nearly 40,000 jobs. [http://www.investinkuopio.fi/business.html] As of , the biggest employers of the city were:
*Town of Kuopio (5 977 employees),
* (KUH; in Finnish KYS) (4 166),
* (1 595),
* (636),
* (596),
* (572),
* (527),
*ISS (478) and
* PLC (350).

Kuopio is known as the cultural center of Eastern Finland. A wide range of musical (from kindergarten to doctorate-level studies) and dance education is available and the cultural life is active. Notable events include , [http://www.kuopiodancefestival.fi Kuopio Dance Festival] , [http://www.kuopiorock.com Kuopio Rockcock] , [http://www.kuopiowinefestival.com Kuopio Wine Festival] and [http://www.finlandicemarathon.net/ Finland Ice Marathon] . In Finland the inhabitants of Kuopio have a special reputation: they are known as jovial, verbally joking and lacking self-irony. People of Kuopio region and Eastern Finland have always had many health problems and the mortality has been higher than on an average in Finland. Because of this, Eastern Finland has been a sweetspot for Public Health studies. "The North Karelia Project" by the in the 1970s was one of its first steps towards world class research.

During the 2000s, Kuopio has placed very well in a number image, popularity and city-attractiveness surveys. In 2007 it was placed third, behind and .

Kuopio is the seat of the Finnish Orthodox Church. This is an autonomous cell within the autocephalous jurisdiction of the Patriarchate of Constantinople. It is the only mainstream Orthodox faction to celebrate Easter on the Latin date. The late Archbishop Paul had been successful in producing literature of popular theology.

Kuopio is bidding for the .