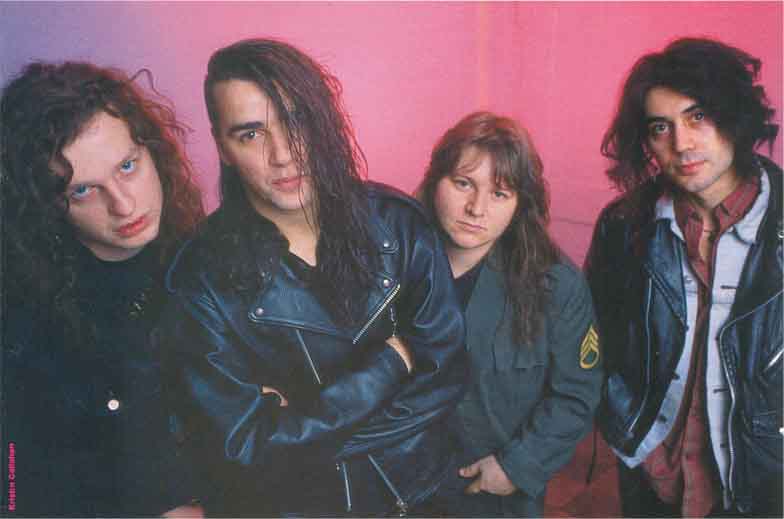 Voivod are a Canadian heavy metal band from Jonquière, , . Their musical style has changed several times since the band's origin in the early 1980s. Starting out as a band, Voivod have added a mix of and to try to create their own unique metal style.

Since its debut record in 1984, Voivod have released eleven studio albums as well as one EP, one live album, two compilations, seven demos and one DVD featuring a live concert. The band found mainstream success in the late 1980s with its most successful album "Nothingface" (1989), which was the first Voivod album to enter the charts, peaking at number 114. [ [http://www.billboard.com/bbcom/retrieve_chart_history.do?model.chartFormatGroupName=Albums&model.vnuArtistId=5967&model.vnuAlbumId=1060393 Billboard.com - Artist Chart History - Voivod] ] Voivod are currently working on a new album, which is due for release in 2009 and will contain songs that were recorded prior to guitarist Piggy's death in 2005.

Voivod were formed in 1982 in , . Influenced equally by the , the burgeoning scene and 70’s , Voivod forged a distinctive brand of heavy music that often relied on lyrical themes such as Reagan-era politics, post-apocalyptic literature and . "" (1987) began the band's evolution in earnest, with the character from Voivod's album covers (drawn by drummer Away and named as "Korgull" on 1986's "") significantly being depicted in a spaceship. Drawing more heavily on hardcore punk than metal influences by this point,

Two of the four founding members (bassist and vocalist ) left Voivod in the early 1990s. Jean-Yves got involved with dance and electronic music, while Denis Belanger isolated himself to battle his drug problems and eventually started a new project, Union Made. Meanwhile, the band recorded four albums as a trio in the mid-to-late 1990s with new member , nicknamed "E-Force", handling both vocals and bass guitar. Forrest was badly injured in a car accident in in 1998, and that incarnation of Voivod never regained the momentum they lost during his rehabilitation. After left the band, his insurance company attempted to sue the band for the injuries he sustained in the crash, as he was in the care of the band at the time. Voivod briefly disbanded in 2001 before Bélanger returned to the band. The last incarnation of Voivod featured three of the four founding members: (aka Snake, vocals), (Piggy, guitars), and (Away, drums) along with (Jasonic, of Flotsam and Jetsam and ) on bass guitar. Guitarist Denis D'Amour died at the age of 45 on 26 August 2005 due to complications from . [ [http://www.theendrecords.com/label//index.php?option=com_content&task=view&id=33&Itemid=38 http://www.theendrecords.com - Voivod (Canada) ] ] Their most recent record is "Katorz" (which is an "alternative" way of writing "quatorze", fourteen in French), released in July 2006. The album is based around riffs found on the laptop of guitarist Denis D'Amour. Just prior to his death, he left instructions for his fellow bandmates on how to use them.

Langevin confirmed that Voivod were planning to work on their final studio album in late 2007, [ [http://www.roadrunnerrecords.com/blabbermouth.net/news.aspx?mode=Article&newsitemID=62995 blabbermouth.net] ] which will contain tracks recorded with D'Amour before his death. For the recordings of this final album the band had invited their previous members Blacky and Eric Forrest. Langevin also launched a new '-esque' band in 2007, Kosmos, who issued a self-titled debut via the End Records in September. Voivod has confirmed they will be playing at the Heavy MTL show being held in Montreal the 22nd of June, 2008. Voivod also confirmed that they will be playing at the Monsters of Rock Festival in Calgary, Canada on 26 July 2008, and are supporting Judas Priest at the Bell Center, Montreal, Canada on 12 August 2008. Voivod will perform a full set at Thrash Domination in Kawasaki, Japan, 20-21 September 2008, along with the bands Testament and Forbidden. The band will consist of Bélanger, Langevin, Thériault, and Dan Mongrain on Guitar.