The University of Zaragoza or sometimes Saragossa University (in Spanish: Universidad de Zaragoza) is a university located in Zaragoza, in the Aragon region of Spain. Founded in 1542, it is one of the oldest universities in the world (with a history dating back to the Roman period), has over 40,000 students in its 22 faculties, and ranks among the top public universities in Europe. Situated in the heart of Aragon, the University of Zaragoza is the only public university in the region, which means it is funded by the “Diputación General de Aragón” (Government of Aragon) and the government of Spain. Its activity is spread along the three provinces of Aragon, with teaching campuses and research centres in Huesca, Teruel and Zaragoza. 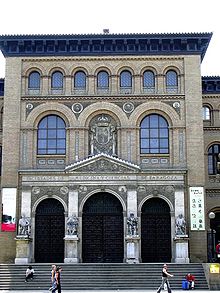 The building of the Ancient Faculty of Medicine and Sciences in Zaragoza, now called Paraninfo.

Like other institutions of the past and of other nations, the University of Zaragoza did not suddenly arise, but rather had its beginnings in what were known as the Ecclesiastical Schools. In the city these were later known as the School of Zaragoza, whose guiding spirit in the 7th century was the Bishop Braulio (which is the reason why in modern times he was made the patron saint of the University). Later, references from 1335 indicate there was a School of Arts (known as liberal arts, since the classics included in the "trivium and "quadrivium" were taught there. Between 1474 and 1476 this institution earned the category of General School of Arts, to become a university in the 16th century.

The cultural activities and endeavours of the leaders of Zaragoza during the last third of the 15th century had obtained authorization from Pope Sixtus IV in 1474 and, at the petition of Fernando, the future King of Aragon, it was made a General School of Arts. Coinciding with the introduction of the printing press, evidence of an interest in knowledge, ratification of the General School of Arts was obtained from King Juan in 1476. Thus the capital of the Kingdom of Aragon could now grant the degree of “Bachiller” in Arts. In 1477, the Rector Pedro de la Cabra and a representative of the town council prepared its first bylaws. Petitions to enable it to grant the full degrees of “Licenciado” and “Doctor en Facultad” continued until 1542, the date on which one can speak of the University of Zaragoza as existing "de jure", since it did not exist as such “de facto” until 1583, its official founding date.

As was to be expected in the 16th century, this University arose in a very simple society if we judge it using only material criteria, but in reality in a very complex and diverse one, if we take into account both the material and the spiritual. It is said that two worlds existed then, the rural and the urban. In Aragon this classification is valid, but it must be understood that with regard to legal relations in the feudal production system in the rural world, a distinction must certainly be made between the estates of the Church, widows and the Crown –without "absolute power", the right that allowed them starve the serfs without a fair trial– and the secular estates –which had "absolute power"-, a distinctive criterion that may serve the occasion. As for the urban world, all belonging to the Crown, we must make a distinction between the capital, Zaragoza, seat of the government of the monarchy and the king himself, with a singular council and several high-level courts of justice, which gave its people (although they did not enjoy privileges) considerable freedom of action in comparison to other towns, and the other urban areas of the Crown distributed throughout Aragon, whose freedom was more limited by their lower concentration of population and limited contact with the outside world. It was certainly a society in which, given its complexity, we can observe the presence of the poor and alienated, as well as a noteworthy number of immigrants, especially French, who in 1577 constituted a fifth of the population and lived throughout Aragon, becoming a part of the web of Aragonese society or living temporarily or seasonally in the area. From a qualitative perspective, neither should the important contribution of Catalonian and Genovese merchants to the area’s economy be overlooked.

On the other hand, in that 16th century Aragon was also immersed in the general movement known as the Renaissance, with its great religious conflicts and well-known political figures, to which outstanding Aragonese made contributions, among them, Miguel Servet. The nobles and urban patricians of Zaragoza offered their resources for its development: palaces, churches, paintings, print shops and literary and scientific works represented a great endeavour that attracted and developed the most diverse techniques and the most refined exercise of the intellect.

It was the effort of a few –basically urban patricians and the educated clergy– who obtained from the King of Aragon and "Emperor of the Romans" the privilege of founding the General School of all Faculties in the city of Zaragoza. To do so they took advantage of the meeting of the Cortes Generales assembly in Monzón and precisely on September 10, 1542 the Emperor, King of the Aragonese, with his mother Juana, signed with his “I, the King” the document –privilege- that created "de jure” the Schools of Theology, Canon and Civil Law, Medicine, Philosophy, Art and any that were acceptable in the university community.

The members of the city council of Zaragoza, Martin de Alberuela, Juan de Paternoy and Miguel Frances, led by the town elder Jeronimo Oriola, had achieved their objective. And certainly, of no little importance was the fact that there were professors at the university of the stature of Gaspar Lax de Sariñena, who having studied in Zaragoza, had devoted his talents to teaching in Paris, to return in 1525 to dedicate himself to the study and teaching of mathematics, logics and philosophy, disciplines in which he was a prominent European figure. But greater determination and resources were still needed.

As on so many occasions (some quite recent), the Papal Bulls of confirmation in 1554 and 1555 did not provide economic resources, and the privilege was not accompanied by any income or benefit with which to undertake the tasks of a university. It would have to wait to obtain funds from the city government, which were so decisive and had been a long-standing tradition. The city government had already shown its interest in the School in 1492, having requested money from the Kings with which to pay the professors’ honoraria, a clear antecedent of what happens today, but from the Alma Mater itself. It provided financing for the chairs of Theology in 1500 and Poetry and Rhetoric in 1503, and also to the School itself, which with money from students hired a part-time professor in 1509. And there were contributions from people such as Pedro Cerbuna (the first and exemplary case of an individual patron) with whose material support, no less enthusiasm, and despite opposition from the Viceroy as the maximum representative of the “central government”, classes began no fewer than forty years later in 1583. As a site, the University didn’t have its own buildings until 1586 with the construction of the Casa de Anatomia, by the cemetery of the Hospital of Nuestra Señora de Gracia, developing in the area of La Magdalena between 1589 and 1594.

Thus, in the year 1542 the University of Zaragoza was granted the authority to take the giant step to become what we today call University. That was four hundred and fifty years ago and is what we remember, but it was necessary to continue the endeavour, and many illusions were lost by the wayside, until others who kept or received their enthusiasm and avoided obstacles, as did Pedro Cerbuna, gave their best efforts and were able to create the General School of All Faculties in 1583, whose fourth centenary was celebrated in 1983.

In its lecture-rooms have taught internationally recognised professors like the Nobel Prize winner Santiago Ramón y Cajal[citation needed], who is often considered to be one the "Founding Fathers of Neurosciences".

University of Zaragoza at present

The University of Zaragoza is the main centre of technological innovation in the Ebro Valley and enjoys a great prestige among the group of Spanish, European and International universities it has relations with.[citation needed]

Academic staff at the University of Zaragoza are highly specialised and have a broad research and teaching experience. Be it Spanish as a Foreign Language or fields as interesting to international students as Spanish Literature, Geography, Archaeology, Cinema, History, Biocomputation and Physics of Complex Systems (BIFI Research Group) or Nanotechnologies (among many others), the combination of teaching and research is proving very successful.[citation needed]

The University, with a total of about 40.000 students, is composed by a teaching staff of about 3.000 with different positions and an administrative and technical staff of about 2.000. It is distributed in campuses located in Zaragoza, Huesca and Teruel.

Through the Vice-Rectorship for International Relations, the University of Zaragoza participates in several exchange programmes. It collaborates with Universities and research institutions from Europe (ERASMUS programme), Latin America and the U.S.A. (IMCC), thereby strengthening its international standing.

The Massachusetts Institute of Technology-University of Zaragoza International Logistics Program is a unique research and education partnership that brings together the supply chain interests of academia, industry and government – all linked to the development of the largest logistics park in Europe.

The program was established in 2003 by the MIT Center for Transportation and Logistics (CTL), the University of Zaragoza (Spain), the government of Aragón, industry partners, and the PLAZA logistics park in Zaragoza, Spain. The education program offers a master's degree modeled on MIT's Master of Engineering in Logistics (MLOG), a doctorate degree, and executive education courses leading to certificates in various logistics-related disciplines. The research program uses the logistics park as a working laboratory to experiment with new logistics processes, concepts and technologies, in active collaboration with leading academic institutions and companies from around the world.

Some facts about the University of Zaragoza

22,1 % of students registered in Doctorate Studies for the 2006-2007 term were international students. The University of Zaragoza received around 820 European students through the Erasmus programme.

The University of Zaragoza covers a wide spectrum of knowledge organised within the areas of Engineering and Technology, Experimental Sciences, Health Sciences, Social and Juridical Sciences and Humanities. In 2005 the annual figure allocated by the University of Zaragoza to research and development was € 36 million. There are 202 research groups, formed by 2.293 researchers, currently working on their projects.

Five Research Institutes have been created within the university along the last 15 years. Their excellent work has brought them national and international recognition in their fields. They are:

Other Research groups and projects

Besides the official studies, the University of Zaragoza offers other interesting possibilities to international students

Courses in Spanish as a Foreign Language

Courses in Spanish as a Foreign Language are run throughout the year and vary between 90 and 570 hours. The University offers all levels and some specialised courses. Courses along the academic term are offered in Zaragoza, while the Summer Courses are offered in Jaca – The Pyrenees. The University of Zaragoza was the first Spanish university to offer Spanish Courses for international students in 1927.

The Visiting Students Programme at the University of Zaragoza is aimed at society in general. Among others, at international students. It opens the opportunity of studying subjects included in some given studies (graduate or postgraduate), without these subjects being part of an official qualification.It is possible to take courses in Spanish as a Foreign Language and certain subjects at the same time.