Pound Puppies and the Legend of Big Paw

Pound Puppies and the Legend of Big Paw 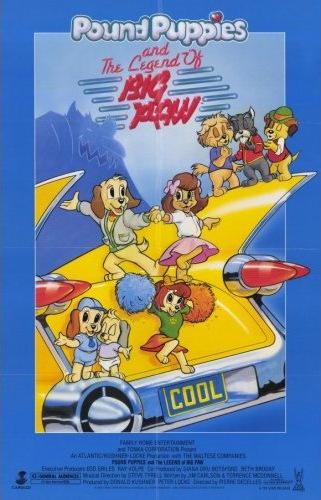 The film's story centers on a magical artifact called the Bone of Scone, a reference to the in Irish and Scottish Legend that gives "Puppy Power" to the Pound Puppies (dogs) and Pound Purries (cats). However, a villain named Marvin McNasty plans to take it and use it for world domination. Without the Bone of Scone, humans will not understand what the animals are saying and, if it is broken, Puppy Power will forever be lost.

"The Legend of Big Paw" was the last theatrically-released animated feature from the late 1980s to promote a major toy line, a common trend in the American cartoon industry during that time. The film did not fare well with critics or audiences during its original release, and grossed only US$500,000 domestically. It premiered on DVD in North America on October 24, 2006. Because of the film's poor box office performance, a soundtrack was never released.

In the present-day 1980s, Whopper is taking his niece and nephew to the museum. Along the way, he tells them the origin of Puppy Power, the ability of humankind to understand the Pound Puppies and Purries. In the (circa 950 AD), a young boy named Arthur pulled the mythical sword from the magical Bone of Scone, which his dog Digalot had disabled, and Arthur immediately discovered the dog could talk.

Whopper's story continues in the 1950s, when the town exhibits the Bone of Scone in honor of its 1,000-year anniversary. The Puppies and Purries, along with teenagers Tammy and Jeff, will be holding an Adoption Bazaar the following day. The Pound Puppies, led by Cooler, visit the exhibit, where Whopper, then a pup, and Bright Eyes, a cheerleader, stray away from the group. Unknown to them, Marvin McNasty is inside plotting his domination.

Some moments later, a nurse called Florence tells the Puppies and teenagers that Collette is having Puplings. They rush out of the exhibit, along with the Purries, Hairball and his girlfriend Charlamange, in order to see them all. But after Collette and the rest bless them in song, McNasty comes to the Pound to adopt four other young dogs in advance. Whopper and the new mother worry about his namesake and stingy attitude. Before McNasty can have the pups, Tammy and Jeff inform him, he has to sign adoption papers. He soon does so and quickly goes off.

A suspicious Whopper goes after him over Collette's objections. Whopper follows him to his truck near the museum, in which his henchmen, Lumpy and Bones, are eating sandwiches. The pup finds out what McNasty is going to do with the four puppies. With his Mean Machine, McNasty will transform them and the rest of the Pound into vicious guard dogs. Whopper goes and tells Cooler, but Cooler does not take him seriously.

Disguised as s, Lumpy and Bones enter the museum and suck up the Bone with a . The Bone goes through a complicated series of contraptions, and Lumpy smashes it on Bones' head. With the henchmen in pursuit, Whopper runs back to the Pound with one half of the Bone. However, the henchmen catch Whopper and Collette and return to their boss.

Meanwhile, the Bone has lost its magic, and with neither Puppies nor humans able to communicate, the Adoption Bazaar will have to be canceled. Cooler tells Howler to tell all of the town dogs that two dogs have been kidnapped and taken to the nearby woods, where McNasty operates. The Pound Puppies, and Purries, set off to rescue them.

Soon, Collette and Whopper escape from their cage inside McNasty's laboratory, and briefly reunite with the rest of the Puppies. However, Lumpy and Bones snatch them back. The Puppies give chase, but nearly all of them end up in a -infested cave, hanging on a rope, before the Purries pull them up to safety.

The Puppies and Purries continue looking for their friends. When they get caught in a patch of mire, they are saved by the legendary Big Paw, who agrees to find the Bone with them. Later, McNasty's henchmen transform the Puppies into guard dogs, save for Cooler. Big Paw brings him and the Purries back to town to stop the evil trio, as the trio's truck heads to the Pound.

At the exhibit, Lumpy and Bones help crown Marvin. As they glue back the Bone together, "Puppy Power" returns, and Cooler can finally understand Tammy and Jeff. They head back to the museum to chase off McNasty via a tunnel that Big Paw has dug up, followed by the transformed Puppies. While encaged in a dinosaur exhibit, Cooler and Big Paw see one of Collette's Puplings tell her "I love you". Thus, she is changed back to good, and Cooler whispers the same thing to his friend Reflex, whose kisses bring the other Puppies back to normal.

Then Big Paw and Cooler chase McNasty and his henchmen all over town and eventually back to the museum and their Mean Machine, which turns them into good men. A moment later, Big Paw and Nose Marie finally get back the Bone of Scone. The next day, a reformed Marvin, Lumpy and Bones go to the Pound and celebrate the Adoption Bazaar along with the Puppies, Purries, Tammy and Jeff.

As soon as the story ends, Whopper and his niece and nephew Puplings find themselves in the museum. The Bone of Scone has returned for another visit, and Whopper introduces Big Paw as a little surprise for the young ones, who did not believe before that he was real. As long as he is here to protect the Bone, Whopper says, Puppy Power will never be lost again.

*Cooler is the leader of the Pound Puppies, and teams up with the other Puppies and Purries to help solve the mystery of the Bone of Scone.
*Nose Marie is another of the Puppies. She has a very keen sense of smell, and always "knows what the nose knows".
*Howler, yet another Puppy, is an inventor who always utters out his namesake, and helps spread the word about the "puppynapping" with his "".
*Early on in the movie, Whopper is a mischievous Pupling who gets into trouble with Marvin McNasty. As a grown-up, he shares the story of Puppy Power to his niece and nephew at the beginning and end of the film.
*Collette mothers a litter of six Puplings early on. Along with Whopper, she gets kidnapped by McNasty. Her Puplings come to the rescue later in the film.
*Bright Eyes is the cheerleader among the group, and stamps out papers during the Adoption Bazaar as the film ends.
*Reflex turns into a lovesick canine whenever a bell rings, kissing everyone he meets and shouting "I love you!" every time. Later on, he uses this tactic to turn the other Puppies back to normal.
*Florence is a nurse who announces, and attends to, the birth of Colette's Puplings.
*Big Paw is the ages-old guardian of the Bone of Scone. He is introduced to the dogs and cats as a lonely puppy who is homeless and has no friends.
*Hairball, who always coughs up his namesake, and his girlfriend Charlamange, are the Pound Purries featured in the film.
*In the Dark Ages scene, Digalot pulls out the Bone so that his owner, Arthur, can get Excalibur and become King of England. Cooler can trace his family history back to him.

*Marvin McNasty is the film's villain, and a descendant of Sir McNasty. Like his ancestors, he has always wanted to conquer the world with the Bone. He also suffers from cat allergies.
*Lumpy and Bones are McNasty's two awkward henchmen, and goof up some of his schemes.
*Tammy and Jeff are the two teenagers who run the Puppies' Pound and the Adoption Bazaar.
*Sir McNasty is the Evil Knight who tries to claim the Bone of Scone in the Dark Ages segment.
*King Arthur, as a boy, pulls Excalibur out of the stone in that same scene.

According to DeCelles, the film took 5½ months to complete, starting in the fall of 1987. [ [http://wwwdb.oscars.org:8100/servlet/impc.DisplayCredits?vetted=T&primekey_in=1999090820:18:598-1666755 "Pound Puppies and the Legend of Big Paw"] - Index to Motion Picture Credits at AMPAS site. Retrieved January 5, 2007.] The first 2½ months were spent on preparing its layouts and storyboards, and the remaining time on the animation, backgrounds and shooting. The overseas work was done by and , two ese companies known for their contributions to children's animated series. [ [http://www.imdb.com/user/ur11430446/comments Comments written by "thesevensamurais" (username for Pierre DeCelles)] at the Internet Movie Database. Retrieved December 29, 2006.]

The movie's animation and character design were different from what was featured in the Hanna-Barbera series, and did not contribute to the latter's continuity. A new set of characters were introduced for the film: Pound Puppies Collette, Beamer, and Reflex, and the Pound Purries Hairball and Charlamange, along with two teenagers, Tammy and Jeff, that replaced the 11-year-old Holly.

Critical response to "The Legend of Big Paw" was unsupportive at most during its theatrical run. The Hollywood trade magazine, "Variety", called it "uninvolving and endlessly derivative".

The "", who also denounced it, began their review thus:

Writing for "The Animated Movie Guide" by animation expert , Stuart Fisher gave the film one star out of four, and saw the film's artistic quality as "a mixed bag". " [While] the backgrounds are somewhat imaginative and colorful, the character animation is flat and lifeless. Rapid cuts to new angles of the same shot seem to try to cover up limitations of the animation technique," he continued.

During its short run in U.S. theaters, "The Legend of Big Paw" only grossed more than US$500,000. [ [http://boxofficemojo.com/movies/?id=poundpuppies.htm "Pound Puppies and the Legend of Big Paw"] at Box Office Mojo. Retrieved September 22, 2006.] It was the only animated feature produced by Carolco, and distributor TriStar's only one until 2001's "The Trumpet of the Swan". The film was also the last in a line of 1980s animated productions for the big screen which featured established toy properties as their main characters. Previous examples included movies that were based on the Care Bears, and . [ [http://www.cartoonresearch.com/movies.html Animated Features 2 (1981&ndash;1991)] at Cartoon Research. Retrieved December 27, 2006.]

The music for "The Legend of Big Paw" was directed by , with the original score composed by , , , Ashley Hall and Bob Mann. The film's six songs, which are influenced by popular songs and standards from the 1950s and after,