The Trumpet of the Swan (film)

The Trumpet of the Swan (film)

Infobox Film
name = The Trumpet of the Swan 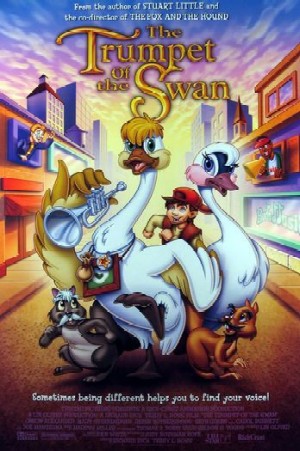 
"The Trumpet of the Swan" is a 2001 animated film produced by , directed by Richard Rich, and distributed by , being TriStar's first animated film ever since 's "". It is loosely based on the popular children's book by . It tells the story of a young who is born without a voice and is vying for the attention of a beautiful pen named Serena. He overcomes this by learning to play the . It stars the voices of , , , , and .

It was not well received by critics. Many stated the animation was poor, that the charm of the original book was lost, the characters were dull, the casting did not match, the songs were unmemorable and that the character design was awful. But the most common criticism of the film version was that it did not follow the original story well. This disappointed many fans of the book. On , it scored 13% rotten on the tomato-meter. It failed to get an audience at the box office, for two reasons, A small limited release, and the release of the "" the following week would cause the film to lose most of its audience.

In 2001, it was nominated by the for best voice-casting in an animated film, but lost the award to Disney-backed "". It is notable, however, that an independent animated film would be able to win such a nomination. It was the last film based on a book by until 's "Charlotte's Web".