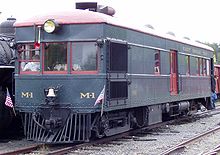 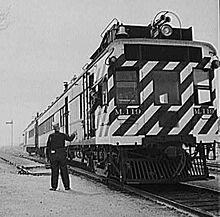 In the United States, doodlebug was the common name for a self-propelled railroad car (multiple unit). While such a coach typically had a gasoline-powered engine that turned a generator which provided electricity to traction motors, which turned the axles and wheels on the trucks, versions with mechanical transmissions also existed.

Doodlebugs sometimes pulled an unpowered trailer car, but were more often used singly. They were popular with some railroads during the first part of the 20th century to provide passenger and mail service on lightly used branch lines, obviating the need to operate conventional trains consisting of a locomotive and coaches. Several railroads, mostly small regional and local networks, provided their main passenger services through doodlebugs in a cost cutting effort.

While interest in self-propelled cars did exist before the late 1910s in the form of the electric trolley and streetcar as well as a few other examples, the better portion of doodlebug usage in the United States can be traced to this time period. Electro-Motive, then in the form of the Electro-Motive Corporation as the General Motors purchase had not yet occurred, began the large scale production of self- propelled railcars using bodies manufactured by Pullman and the St. Louis Car Company. By the 1920s the gas-electric car had become one of the main providers of branch-line service.

The term "doodlebug" is of uncertain origin. Most likely it is used in a number of unrelated ways, often as a nickname applied to diminutive types, such as small airplanes or cars. In the railcar usage of the term it may have been derived from the phrase "doodling through town" that may have been applied to reference the function of the coaches themselves.