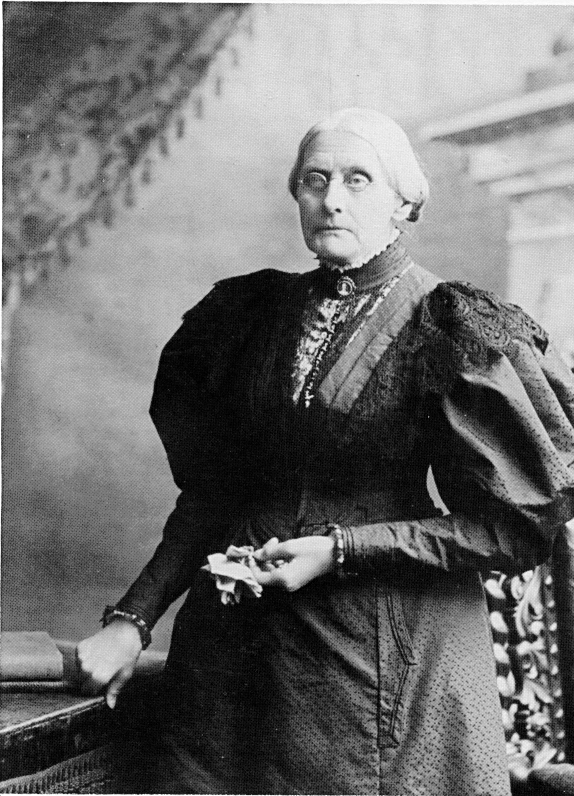 Susan Brownell Anthony (, &ndash; , ) was a prominent American leader who played a pivotal role in the 19th century movement to introduce women's suffrage into the United States. She traveled the United States and , and gave 75 to 100 speeches per year on women's rights for 45 years.

Anthony was born and raised in West Grove, near . She was the oldest of seven children, Susan Brownell (1820), Daniel Read (1822), Jacob Merritt (1824), Guelma Penn (1826), Hannah E. (1828), Mary Stafford (1830), and Eliza Tefft (1832), born to Daniel Anthony and Lucy Read. One brother, publisher , would become active in the anti-slavery movement in , while a sister, Mary Stafford Anthony, became a teacher and a woman's rights activist. Anthony remained close to her sisters throughout her life.

Anthony was a precocious child, having learned to read and write at age three. Her father, a manufacturer and abolitionist, was a stern but open-minded man who was born into the religion. Her mother was a student in Daniel's school when she and Daniel fell in love. Although Lucy readily agreed to marry Daniel in 1817, she was less sure about marrying into the (Quakers). She was not a convinced Quaker and claimed that she was “not good enough” for the

Anthony's mother, Lucy, was a progressive-minded woman. She attended the Rochester women’s rights convention held in August 1848, two weeks after the historic , and signed the Rochester convention’s . Together the Anthonys enforced self-discipline, principled convictions, and belief in one's own .

In 1826, when Susan was six years old, the Anthony family moved from to . Susan was sent to attend a local district school, where a teacher refused to teach her because of her gender. Upon learning of the weak education she was receiving, her father promptly had her placed in a group , where he taught Susan himself. Mary Perkins, another teacher there, conveyed a progressive image of to Anthony, further fostering her growing belief in women's equality.

In 1837, Anthony was sent to "Deborah Moulson's Female Seminary", a Quaker boarding school in Philadelphia. She was not happy at Moulson's, but she did not have to stay there long. She was forced to end her formal studies because her family, like many others, was financially ruined during the . Their losses were so great that they were forced to attempt to sell everything in an auction, even their most personal belongings, which were saved at the last minute when Susan's uncle, Joshua Read, stepped up and bid for them in order to restore them to the family.

In 1839, the family moved to Hardscrabble (later called Center Falls) New York, in the wake of the panic and economic depression that followed. That same year, Anthony left home to teach and to help pay off her father's debts. She taught first at "Eunice Kenyon's Friends' Seminary" in New Rochelle, and then at the "Canajoharie Academy" in 1846, where she rose to become headmistress of the Female Department. Anthony's first occupation inspired her to fight for wages equivalent to those of male teachers, since men earned roughly four times more than women for the same duties.

In 1849, at age 29, Anthony quit teaching and moved to the family farm in Rochester, New York. She began to take part in conventions and gatherings related to the . In Rochester, she attended the local and began to distance herself from the Quakers, in part because she had frequently witnessed instances of hypocritical behavior such as abuse amongst Quaker s. As she got older, Anthony continued to move further away from in general, and she was later chastised by various Christian religious groups for displaying tendencies.

In her youth, Anthony was very of her looks and speaking abilities. She long resisted public speaking for fear she would not be sufficiently eloquent. Despite these insecurities, she became a renowned public presence, eventually helping to lead the women's movement.

In the decade before the , Anthony took a prominent role in the New York anti-slavery and temperance movements. In 1849, at age 29, she became secretary for the "Daughters of Temperance", which gave her a forum to speak out against alcohol abuse, and served as the beginning of Anthony's movement towards the public limelight.In 1851, on a street in Seneca Falls, Anthony was introduced to by mutual acquaintance, as well as fellow . Anthony joined with Stanton in organizing the first women's state temperance society in America after being refused admission to a previous convention on account of her sex, in 1851. Stanton remained a close friend and colleague of Anthony's for the remainder of their lives, but Stanton longed for a broader, more radical women's rights platform. Together, the two women traversed the United States giving speeches and attempting to persuade the government that society should treat men and women equally.

In 1856, Anthony further attempted to unify the and women's rights movements when, recruited by abolitionist Fact|date=April 2007, she became agent for 's of New York State. Speaking at the Ninth National Women’s Rights Convention on , , Anthony asked "Where, under our Declaration of Independence, does the Saxon man get his power to deprive all women and Negroes of their inalienable rights?"

In 1869, long-time friends and Susan B. Anthony found themselves, for the first time, on opposing sides of a debate. The Equal Rights Association, which had originally fought for both blacks’ and women’s right to suffrage, voted to support the 15th Amendment to the Constitution granting suffrage to black men, but not women. Anthony questioned why women should support this amendment when black men were not continuing to show support for women’s voting rights. Partially as a result of the decision by the Equal Rights Association, Anthony soon thereafter devoted herself almost exclusively to the agitation for women's rights.

On , , Anthony first published a weekly journal entitled "The Revolution". Printed in , its motto was: "The true republic &mdash; men, their rights and nothing more; women, their rights and nothing less." Anthony worked as the publisher and business manager, while Elizabeth Cady Stanton acted as editor. The main thrust of "The Revolution" was to promote women’s and African-Americans’ right to suffrage, but it also discussed issues of equal pay for equal work, more liberal divorce laws, the church’s position on women’s issues and abortion, which she opposed. [The Revolution, IV, No. 1 (July 8, 1869)] The journal was backed by independently wealthy , who provided $600 in starting funds.

On , , Anthony was arrested by a U.S. Deputy Marshal for alleged illegal voting in the presidential election two weeks earlier. She had written to Stanton on the night of the election that she had "positively voted the Republican ticket &ndash; straight...". She was tried and convicted seven months later, despite the stirring and eloquent presentation of her arguments that the recently adopted , which guaranteed to "all persons born or naturalized in the United States" the privileges of citizenship, and which contained no sex qualification, gave women the constitutional right to vote in federal elections. The sentence was a fine, but not imprisonment; and true to her word in court, she never paid the penalty for the rest of her life. The trial gave Anthony the opportunity to spread her arguments to a wider audience than ever before. [Linder, Douglas: "The Trial of Susan B. Anthony for Illegal Voting," University of Missouri-Kansas City School of Law, at http://jurist.law.pitt.edu/trials14.htm]

In 1893, she joined with in forming a chapter of the Woman’s Educational and Industrial Union (WEIU) [cite web | url = http://www.winningthevote.org/weiu.html | title = Western New York Suffragists - Women Educational and Industrial Union | year = 2000 | publisher = Rochester Regional Library Council | accessdate = 2008-07-16] in Rochester. In 1898, she also worked with Montgomery to raise funds to open opportunities for women students to study at , a goal which was reached in 1900.Facts|date=December 2007

Anthony used "The Revolution" as a vehicle in her crusade for equality, writing passionately about a variety of subjects relating to women's rights.

In 1869, Anthony and founded the (NWSA), an organization dedicated to gaining women's suffrage. Anthony was vice-president-at-large of the NWSA from the date of its organization until 1892, when she became president.

In the early years of the NWSA, Anthony made attempts to unite women in the with the suffragist cause, but with little success. She and Stanton were delegates at the 1868 convention of the . However, Anthony inadvertently alienated the labor movement not only because suffrage was seen as a concern for rather than women, but because she openly encouraged women to achieve economic independence by entering the printing trades, where male workers were on strike at the time. Anthony was later expelled from the National Labor Union over this controversy.

In 1890, Anthony orchestrated the merger of the NWSA with the more conservative (AWSA), creating the . Prior to the controversial merge, Anthony had created a special NWSA executive committee to vote on whether they should merge with the AWSA, despite the fact that using a committee instead of an all-member vote went against the NWSA constitution. Motions to make it possible for members to vote by mail were strenuously opposed by Anthony and her adherents, and the committee was stacked with members who favored the merger. (Two members who voted against the merger were asked to resign).

Anthony's pursuit of alliances with and conservative suffragists created long-lasting tension between herself and more radical suffragists like Stanton. Anthony felt strongly that a moderate rather than radical approach to women's rights was more realistic, and would consequently serve to gain more for women in the long-run. Anthony's strategy was to unite the suffrage movement wherever possible and to then concentrate strictly on gaining the vote, temporarily postponing other efforts related to women's rights in order to focus attention on a singular cause. Stanton openly criticized Anthony's stance, writing that Anthony and AWSA leader , "see suffrage only. They do not see woman's religious and social bondage." Anthony responded to Stanton: "We number over 10,000 women and each one has opinions...we can only hold them together to work for the ballot by letting alone their whims and prejudices on other subjects."

The creation of the NAWSA effectively marginalized the more radical elements within the women's movement, including Stanton. Anthony pushed for Stanton to be voted in as the first NAWSA president, and stood by her as Stanton was belittled by the large conservative factions within the new organization.

In collaboration with Stanton, , and , Anthony published "The History of Woman Suffrage" (4 vols., New York, 1884&ndash;1887). Anthony also befriended , an advocate of women's rights and of alcohol in , and , who Anthony endorsed for the presidency of the NAWSA when Anthony formally retired in 1900.

Susan B. Anthony died in in her house at 17 Madison Street on , , and was buried at Mount Hope Cemetery.

Susan B. Anthony, who died 14 years, 5 months and five days before passage of the 19th Amendment giving women the right to vote, was honored as the first real (non-allegorical) American woman on circulating U.S. coinage with her appearance on the . The coin, approximately the size of a U.S. quarter, was minted for only four years, 1979, 1980, 1981, and 1999. Anthony dollars were produced at the Philadelphia and Denver mints for all four years, and at the San Francisco mint for all production years except 1999.

Anthony's childhood home in Battenville, NY was placed on the National Historic Register in 2007 and NY State Historic Register 2006 made possible by, Helise Flickstein. Freddie Mac Bank donated their foreclosed house because Helise Flickstein convinced them to do so. It was Assemblyman Steven Englebright, because Hedi Flickstein, Helise's mother, had contacted him and Assemblyman Roy Mc Donald who finalized the acquisition to the New York State Parks Department in 2006.

The in Rochester was declared a in 1965 and is operated now as a museum. [cite web|url=http://www.susanbanthonyhouse.org/|title=Susan B. Anthony House website]

, was the 100th anniversary of Susan B. Anthony's death.

The American composer and poet wrote an opera, "", that abstractly explores Anthony's life and mission.

Anthony is commemorated in a sculpture by at the , unveiled in 1921.