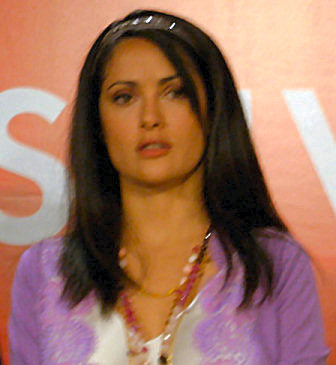 Salma Hayek Jiménez (born , ) is a Mexican and American , director, television and film producer. Hayek has appeared in more than thirty films and performed as an actress outside of Hollywood in Mexico and . Hayek's charitable work includes increasing awareness on and against immigrants. [http://go.reuters.com/newsArticle.jhtml?type=oddlyEnoughNews&storyID=12929239]

At the age of 23, Hayek landed the title role in "Teresa" (1989), a successful Mexican that made her a star in Mexico. In 1994, Hayek starred in the film "" ("Miracle Alley"), which has won more awards than any other movie in the history of Mexican cinema. For her performance, Hayek was nominated for an . [cite web | title = Ariel > Ganadores y nominados > XXXVII 1995 | url = http://www.academiamexicanadecine.org.mx/ver_ariel.asp?anio=XXXVII+1995&tipo=anio | language = Spanish | accessdate = 2008-02-19 | publisher = Academia Mexicana de Artes y Ciencias Cinematográficas]

Hayek moved to in 1991 to study acting under , [cite web | title = Stella Adler Alumni | url = http://www.stellaadler-la.com/alumnifamous.html | accessdate = 2008-02-19 | work = stellaadler-la.com] hoping for a career in Hollywood, despite limited fluency in English, attributed to her suffering from . [citation | title = Oprah's Cut with Salma Hayek | url = http://www.oprah.com/omagazine/200309/omag_200309_ocut.jhtml | publisher = O, The Oprah Magazine | date = September 2003] and his producer wife soon gave Hayek the break she needed, a starring role opposite in 1995's "Desperado". The movie caught Hollywood's attention, as moviegoers proved to be dazzled by Hayek as Rodriguez had been. Due to Hayek's loyalty to the director, she would later decline playing the role eventually took in "" after Rodriguez abandoned the project. She has also appeared in the "" trilogy.

Hayek had a starring part opposite in the romantic comedy "". She followed her success in "Desperado" with a brief but memorable role as a vampire queen in "", where she provocatively danced on a table. In 1999, she co-starred in 's big-budget "", and played a supporting role in Kevin Smith's "Dogma". In 2000, she had an uncredited acting part opposite in "Traffic". In 2003, she reprised her role from "Desperado" by appearing in "", the final film of the "".

"", co-produced by Hayek, was released in 2002. Starring Hayek as , and as her unfaithful husband, , the film was directed by and featured an entourage of stars in supporting and minor roles (, , , ) and cameos (). She earned a Best Actress nomination for her performance. This made Hayek, along with and , one of only three Mexican actresses to have been nominated for an Academy Award. The film earned two Oscars.

Hayek is an executive producer of "", a television series airing around the world since September 2006. Hayek adapted the series for American television with , who acquired the rights and scripts from the "" in 2001. Originally intended as a half hour sitcom for NBC in 2004, the project would later be picked up by ABC for the 2006–2007 season with also producing. Hayek guest-starred on "" as , a magazine editor. She also had a cameo playing an actress in the telenovela within the show. The show quickly became a ratings hit and won a for Best Comedy Series in 2007. Hayek's performance as Sofia resulted in a nomination for Outstanding Guest Actress in a Comedy Series at the . [ [http://www.emmys.org/awards/2007pt/59thnominations.php Academy of Television Arts & Sciences ] ]

She is developing and producing "La Banda", a Spanish-language romantic comedy set in Mexico, written by .

Hayek has been credited as a song performer in three movies. The first was "Desperado" for the song "Quedate Aquí". In "Frida" she performed with band the Mexican "La Bruja". She also recorded "Siente mi amor", which played during the of "Once Upon a Time in Mexico". She also contributed to "Happiness is a Warm Gun" in "Across the Universe" as the singing nurses.

Hayek has been a spokesperson for Avon cosmetics since February 2004. [ [http://www.avoncompany.com/women/news/press20040722.html Avon Foundation Newsroom ] ] She formerly served in the same function for in 1998. In 2001, she modeled for [ [http://goliath.ecnext.com/coms2/summary_0199-1753966_ITM The market report.(women's perfumes)(Statistical Data Included) - Journal, Magazine, Article, Periodical ] ] and was featured in 2006 as photographed by . [ [http://publications.mediapost.com/index.cfm?fuseaction=Articles.showArticle&art_aid=55319 MediaPost Publications Home of MediaDailyNews, MEDIA and OMMA Magazines ] ] On , she helped introduce La Doña, a by Cartier inspired by fellow Mexican actress . [ [http://www.diezydiez.com/fullnews.php?id=17(Spanish-language) Diezydiez - Revista De Relojes Y Joyas ] ]

She was also featured in a series of for Lincoln cars. Consequently, sales of the among Hispanics increased by twelve percentage points. [http://www.hispaniconline.com/trends/2003/summer/success/index.html]

In the spring of 2006, in displayed sixteen portrait paintings by of Hayek as Itzapapalotl. [ [http://www.mysanantonio.com/entertainment/visualarts/stories/MYSA040206.1P.salma.50ce305.html MySA.com: Visual Arts ] ]

Hayek is a naturalized U.S. citizen. [cite web | title = Salma Hayek Biography | publisher = People | url = http://www.people.com/people/salma_hayek/biography/0,,20007809_10,00.html | accessdate = 2008-02-19] She dated actor between 1999 and 2003, and then in 2003. She has friends in Los Angeles and Mexico and is best friends with Spanish actress . The two co-starred in the 2006 film "." Hayek studied at . [cite web
url = http://www.ramtha.com/createyourday/
title = Ramtha's School of Enlightenment, the School of Ancient Wisdom
accessdate = 2006-10-21
year = 2006
language = English
quote = Having been a skeptic for most of my life, Ramtha has taught me about the possibilities we all have to influence reality using science to explain the mechanics in a way that finally makes sense to me. His technique on creating the day has been very effective in my life.]

On , she and Pinault announced the end of their engagement. [ [http://www.reuters.com/article/peopleNews/idUSN1838491120080718 Salma Hayek, Pinault cancel engagement] ]

Since the birth of her daughter, Hayek has worked to help mothers in developing nations worldwide, teaming up with Pampers and UNICEF to help stop the spread of life-threatening maternal and neonatal tetanus. She is the spokesperson for the Pampers/UNICEF partnership in the U.S. and Canada called: 1 Pack = 1 Vaccine to help raise awareness of this program.