The Mormon religion is predicated on what are said to be historical events such as the First Vision of Joseph Smith and the historicity of the Book of Mormon, which describes a detailed pre-Columbian history of North America.[1] President Joseph Fielding Smith, the tenth LDS prophet, declared that "Mormonism, as it is called, must stand or fall on the story of Joseph Smith. He was either a prophet of God, divinely called, properly appointed and commissioned, or he was one of the biggest frauds this world has ever seen. There is no middle ground."[2] As Jan Shipps has written, "Mormonism, unlike other modern religions, is a faith cast in the form of history," and until after World War II, Mormons did not critically examine the historical underpinnings of their faith; any "profane" investigation of the Church's history was perceived "as trespassing on forbidden ground."[3]

Although traditional Christianity is likewise a history religion,[4] few primary sources survive from two or three millennia ago, and biblical places such as Jerusalem, Jericho, and Bethlehem, are acknowledged to exist by scholars of every religious persuasion. Likewise, the Assyrian and Babylonian empires mentioned in the Bible are treated in all histories of the ancient Near East. By contrast, locations of Book of Mormon places are disputed even by Mormons, and the existence of those places is not acknowledged by any non-Mormon scholars. Martin Marty, a Lutheran scholar of American religion, has observed that LDS beginnings are so recent "that there is no place to hide....There is little protection for Mormon sacredness."[5]

For more details on Mormon history as an academic field, see Mormon studies. 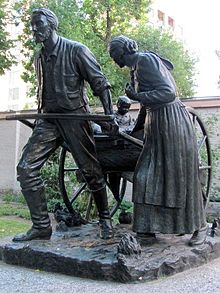 As Richard and Joan Ostling have written, "Mormons remember." There has been an official church historian since the organization of The Church of Jesus Christ of Latter-day Saints, and "Mormon youths and their sisters are exhorted to keep journals as part of their religious commitment. Missionaries are reminded by their superiors that the journals represent a part of their sacred duties."[6] The pioneer era is an especially fertile field for faith-promoting history. As Wallace Stegner has written, the "tradition of the pioneer that is strong all through the West is a cult in Utah."[7] Mormons "tell and retell their stories of pioneer privations and persecutions." Mormon young people are often given the opportunity to pull a handcart through a patch of desert; Mormon children are early taught the miracle of the gulls, the story of seagulls that supposedly saved the crops of the earliest Utah pioneers from an invasion of crickets in 1848.[8]

Under President Joseph F. Smith, the LDS Church began to purchase, refurbish, and reconstruct its sacred sites, beginning with Carthage Jail in 1903. "Visitors' centers, restored houses, historic parks, monuments, and trail markers sprouted everywhere." In 1999 the Church maintained forty-four such sites, many of which were staffed by Mormon missionaries.[9]

Mormons have also developed "something of an annual outdoor pageant circuit" which serves as both a proselytizing tool and a "faith-affirming" experience to the volunteer participants and most of the audience.[10] An elaborate Hill Cumorah pageant, on the site where the golden plates are said to have been revealed to Joseph Smith, has been annually performed since 1937.[11] Other LDS pageants are regularly performed in eight locations in the United States, including Nauvoo, Illinois; Independence, Missouri; Manti, Utah; and Oakland, California.[9]

Likewise, the LDS Church has regularly produced faith-promoting films with excellent production values for showing in Salt Lake City and at the visitors' centers of Mormon historic sites. Recent films include Legacy: A Mormon Journey (1990), The Testaments of One Fold and One Shepherd (2000), and Joseph Smith: Prophet of the Restoration (2005). As Richard and Joan Ostling have written, Legacy is "an example of ritualized history, effectively idealized and simplified." In discussing the Mormon pioneer heritage, "there is no hint of polygamy or millennial land claims or any other distinctive Mormon doctrine, just the idea that a prophet Joseph Smith came up with a new sacred book asking people to lead holy lives."[12] Smith dies as a martyr without mention of Mormon destruction of a Nauvoo newspaper, which triggered the crisis.[12] Nevertheless, "the drama and scenery of the trek are so beautifully photographed" that many Mormons saw the movie repeatedly when visiting Temple Square.[12]

Mormon high school students are encouraged to take seminary, a four year course of religious study. These one-year courses have annual focus on the following: The Old Testament, the New Testament, the Book of Mormon, and Church history and Doctrine and Covenants. The objective is to enable each student to be familiar with the scriptures and to assist them in applying gospel principles in their daily life. College age students between the ages of 18 and 30 are also encouraged to take religious classes known as "Institute". At private Church-sponsored universities and colleges, religion courses are required for graduation. Comparatively little of Mormon doctrinal teaching involves "what traditional Christian catechism would call 'pure theology.'[13] Mormon "history evolves as part of the church's canon," and an LDS Correlation Committee attempts to ensure that "all church publications, from periodicals to curriculum materials, follow official policy and express official interpretations. This means that sensitive historical issues frequently are downplayed, avoided, or denied."[13]

Even the scriptures have been rewritten to fit current doctrine, in line with the idea of continuity and progressive revelation. But once a new version is published, historians are not supposed to notice the change, nor can they write about variations in previous editions. The church regards such reminders as unacceptably embarrassing. The result has been something of an underground traffic in early church documents and editions."[14]

Historian D. Michael Quinn, later excommunicated from the LDS Church, noted that traditional "Mormon apologists discuss such 'sensitive evidence' only when this evidence is so well known that ignoring it is almost impossible."[15] In an oft-quoted speech to Church educators in 1981, Apostle Boyd Packer warned them from the temptation "to tell everything, whether it is worthy or faith-promoting or not....In an effort to be objective, impartial, and scholarly, a writer or a teacher may unwittingly be giving equal time to the adversary....Do not spread disease germs!"[16]

The result of this attitude of Mormonism toward history is that truth, "supposedly embedded in history," becomes "dynamic and fluid."[17] Therefore, as Marxist historian Mark Leone has written, "the church has discouraged any intellectual tradition that would interfere with disguising historical factors or with maintaining much of the social reality through the uncritical way lay history is done."[18] 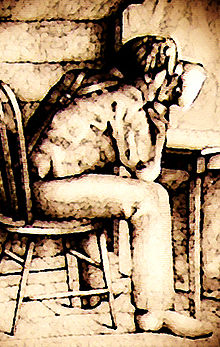 Joseph Smith translating the golden plates by examining stones in his hat. Although abundant evidence testifies to Smith's method of translation, no official LDS Church history has ever portrayed Smith this way.

During the early years of the church, Mormons concentrated on telling providential history as they had been commanded to do by Joseph Smith.[19] Church clerks compiled a history of the Latter-day Saint movement, weaving the accounts of various people together "into a seamless narrative as though Smith himself were speaking." Then between 1902 and 1912, Mormon apologist B. H. Roberts prepared the work for publication, including as part of the title the phrase "History of Joseph Smith the Prophet, by Himself." "Even worse than causing confusion over Smith's lack of authorship, Roberts made corrections, deletions, and emendations to the six-volume work without explaining his reasons for doing so."[20]

In the twentieth century, the term "faithful history" became a synonym for official Mormon historical writing that was apologetic and celebratory and that downplayed or avoided "sensitive aspects of Mormon history."[21] "If the scholar was Mormon and the church did not like the message, it attacked the messenger."[22]

Between the works of "faithful historians" and historical works created by disillusioned Mormons, such as Fawn Brodie's No Man Knows My History (1945), grew the New Mormon History, which emphasized "examining the Mormon past in the hope of understanding it" rather than attacking or defending the religion itself.[23] The most noted of the early New Mormon Historians was Leonard J. Arrington, who earned his doctorate in economics but whose early work culminated in the publication of Great Basin Kingdom, An Economic History of the Latter-day Saints (Harvard University Press, 1958), which became "a watershed in the writing of the New Mormon History."[23] Arrington was important in the organization of the Mormon Historical Association in 1965 and became its first president.

In 1972, Arrington was called to serve as the LDS Church Historian, although he was not a General Authority.[24] But Arrington's attempt to publish New Mormon History through the Church Historian's office met stiff resistance from members of the Quorum of the Twelve.[25] Some of Arrington's subordinates were not allowed to publish through church organs or imprints, and they were eventually removed. Privately, Arrington wrote, "Our great experiment in church-sponsored history has proved to be, if not a failure, at least not an unqualified success."[26] In 1982, the First Presidency sent Arrington a personal letter releasing him from his call as church historian, and the release "was not publicly announced in General Conference."[27] The East Wing of the Church Office Building contains a gallery of portraits of all the church historians—except for Arrington.[28]

Mormon studies became an increasingly hazardous pursuit for Mormon scholars, "especially if they were members of the Brigham Young University faculty."[29] The Church restricted access to papers formerly available to non-Mormons and asked researchers to sign releases "giving the church permission to exercise pre-publication censorship."[27] The sensational Mark Hofmann murder and forgery case of 1985, could only have developed from the "curious mixture of paranoia and obsessiveness" with which both the LDS Church and individual Mormons approached the history of their faith.[30]

Tension between faith and scholarship

Richard Bushman, an academic historian who is also a believing Mormon has written about the tension he feels in writing accurately while also supporting his faith. In his book, Rough Stone Rolling, he does not conceal the more controversial aspects of Joseph Smith's character, but he does try to ameliorate their impact on believing readers while still maintaining historical objectivity. In his essay "The Balancing Act: A Mormon historian reflects on his biography of Joseph Smith," Bushman noted that one reviewer had written of his "walking a high wire between the demands of church conformity and the necessary openness of scholarly investigation."[31] In response, Bushman argued that one did not have to be objective to write history.

Passion and belief are certainly not requirements for historical inquiry, but neither are they crippling handicaps. Once we relinquish, as we must, the "noble dream" of objective history, personal commitment becomes a valuable resource…Contrary to the idea that belief closes the mind, our passions open our eyes and ears. Stifling my belief in Joseph Smith would extinguish one of my greatest assets.[31]

I also knew that if I overly idealized Smith, I would lose credibility with non-Mormons. With a broad readership in mind, I could not conceal his flaws. Moreover, I tried to voice unbelieving readers’ likely reactions when Smith married additional wives or taught doctrines foreign to modern sensibilities. When he went beyond the pale, I acknowledged readers’ dismay.[31]

In a short but revealing book published after his book tour for Rough Stone Rolling, Bushman concluded that he had "the educated Mormons" with him but that although he had the respect of most non-Mormon scholars, he did not have "their acquiescence. I have not given them a Joseph they can believe in."[32]

Grant Palmer came to a different conclusion in An Insider's View of Mormon Origins (2002), a book for which he was disciplined by the LDS Church. Palmer argued that Latter-day Saints ought to abandon faith-promoting history and center their faith in Jesus Christ "rather than in Joseph Smith's largely rewritten, materialistic, idealized, and controversial accounts of the church's founding."[33]