Chagaev won the WBA title in 2007 with a majority decision victory over Nikolai Valuev, but was made "champion in recess" after he sustained an injury. He relinquished the title after failing to have a rematch with Valuev. In his next fight, Chagaev lost by stoppage to IBF, WBO and IBO Champion Wladimir Klitschko.

Chagaev, a two-time world amateur champion, defeated legendary Cuban boxer Félix Savón to capture the gold medal at the 1997 World Championships but was then stripped of his crown for having two professional fights prior to the championships. Chagaev was reinstated as an amateur the following year when the fights were declared exhibitions.

Chagaev is notable for being the only foreign fighter to defeat Félix Savón twice in the international competitions. First at the age of 19, he beat the then 2-time Olympic champion 14–4 to capture the 1997 World Heavyweight title. In 1999, he defeated him again 7–2 in the final of an international boxing cup in Plovdiv, Bulgaria. Savon was able to avenge defeats in the 1999 World Championship, beating Chagaev 9–1. 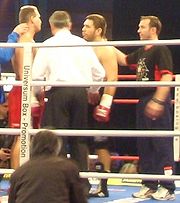 Having fought twice in 1997, Chagaev returned to amateur boxing. He turned pro fully in 2001, with the only flaw on his early record coming October 5, 2002 bout against Rob Calloway in Detroit, Michigan, United States. At the end of third round, the fight was stopped due to Calloway having a wound caused by a headbutt. Michigan boxing rule mandated that the fight be called a Technical Draw (TD) since the bout ended by an accidental foul. Usually four rounds are needed to go to the score cards for decision.

Chagaev slowly but steadily climbed up the heavyweight ranks, first avenging the no-contest with a brutal second round knockout of Calloway, then beating undefeated Ukrainian prospect Vladimir Virchis in a close and intense punchfest, and slowly took apart prominent British boxer Michael Sprott.

On June 26, 2007, it was announced that Ruslan Chagaev would partake in a heavyweight unification bout with WBO heavyweight champion Sultan Ibragimov. The fight was due to take place in Moscow on October 13, 2007 and would have been the first heavyweight unification bout since 1999;[1] however, Chagaev had to drop out of the fight after contracting hepatitis B.[2] At that point, it was not clear whether he would have been able to compete at all, with WBA considering a championship tournament for Chagaev's crown.[3] After Ibragimov defended his crown against Evander Holyfield, however, it was announced that Chagaev was able to recover.

His next mandatory defense was to be a rematch on July 5, 2008 with Nikolai Valuev, who defeated former WBO champion Sergei Liakhovich by unanimous decision to earn the right. However, the fight had to be cancelled after Chagaev suffered a complete tear of an Achilles tendon during his final sparring session in preparation for the defense, causing Chagaev's second postponement of the match. The WBA elected to make Chagaev "Champion In Recess" due to the injury that Chagaev sustained and necessary recovery time and mandated that top-contenders Valuev and John Ruiz meet for the vacated title.[4] By beating Ruiz, Valuev also became champion on August 30, 2008.

Chagaev returned from injury on February 7, 2009 with a victory over the then-unbeaten Costa Rican, Carl Davis Drumond to retain his title. The bout was decided by a controversial technical decision after Chagaev sustained a cut from an unintentional clash of heads. Chagaev and Nikolai Valuev were supposed to fight no later than June 26, 2009 to determine who the WBA regarded as their champion.[5] They were scheduled to fight on 30 May 2009 in Helsinki, Finland at the Hartwall Arena, but Chagaev failed a Finnish medical test, allegedly due to hepatitis. On July 24, 2009, when the WBA published their Official Ratings as of June 2009, Chagaev was no longer the "Champion In Recess" but the #1 challenger instead.

Chagaev was defeated for the first time in his professional career in a bout with Wladimir Klitschko on 20 June 2009 with a 9th round ref stoppage. Klitschko retained his IBF, WBO and IBO crowns and won the vacant Ring magazine title. The fight was held at the Veltins Arena in Gelsenkirchen, Nordrhein-Westfalen, Germany, and Klitschko's IBF, WBO and IBO Heavyweight titles were at stake.

The WBA title that he shared with Nikolai Valuev was not at stake, as the WBA confirmed Valuev was to be the WBA Champion.

Chagaev's parents, Shamil and Zamira Chagaev, are from the Tatar village of Kalda (located in today's Baryshsky District of Ulyanovsk Oblast, Russia), who moved to Uzbekistan in the 1950s.