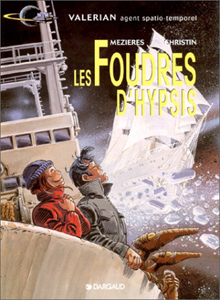 "The Rage of Hypsis" is volume twelve in the French (or "bande dessinée") series "" created by writer and artist .

In this album, continued from "", in the castle of that name, one worries about the threat of nuclear catastrophe likely to sweep Earth's civilisation in 1986 (as first told in the Valérian album "").

Behind the multiplying anomalies, a throbbing presence: that of the mysterious planet Hypsis. A motley crew joining together three Shingouz enthusiasts of strong drinks, a Glapum'Tien extremely well versed in mathematics and an old English Lord and former fighter pilot in the Second World War will fly away with Valérian and Laureline.

It is on Hypsis that the destiny of Earth will be determined. Because, so that the world we know today can escape the cataclysm, it is vital that Galaxity of the future, which had been born from this cataclysm, disappears!

Published in 1985, "The Rage of Hypsis" is one of the premonitory albums in the Valérian series. Because – it should be recalled – it was in 1986 that the nuclear catastrophe took place... at !

Inverloch Castle, the morning after the events of "The Ghosts of Inverloch". Meeting for breakfast, Valérian, Laureline, the Chief, Lord and Lady Seal, the Shingouz, Ralph and Albert consider their next move. Lord Seal reports that worldwide nuclear defence systems continue to be disturbed as more and more mysterious objects from Hypsis are found. Albert produces the secret documents he has carried from France to Inverloch – knowing that the 1986 catastrophe occurred at the , he has used his maritime contacts to provide a list of vessels that may have been involved. The Chief reveals that the devices of Hypsis have also done their work on Galaxity. Lord Seal reveals that a vessel is due to meet them at Kenchmoor Cove. Arriving at the cove, they are met by Merrywhistle of the "HMS Crosswinds". Boarding his ship they begin their voyage.

Valérian's sleep is frequently wracked by nightmares – images of the flood that engulfed the Earth in 1986 and of Galaxity disappearing into space-time. Looking in on the chief Valérian and Laureline are disturbed to see him apparently mesmerized by one of the Hypsis' devices. Meeting with Albert and Merryweather, they consider the ships that are known to be in the Arctic. Albert has narrowed the possibilities down to two s, a whaler and a .

Several days later and they have intercepted and ruled out the two cargo ships and the whaler. Suddenly, Ralph, who has been spending most of his spare time in the ocean, returns to the "Crosswinds" to report that he may have some information. Checking the pictures of the last ship that they seek – the schooner "Hvexdet" – Ralph believes that this is the ship his contacts, the s that live in the Arctic Ocean, have told him about. He returns, accompanied by Valérian, to speak to them again. The orcas tell Ralph that the ship does not seem to be human to them and that they last saw it near .

Some time later, the "Crosswinds" has come upon the "Hvexdet" lying idle amid a group of s. Merrywhistle orders his ship to ram the "Hvexdet". Just as the prow of "Crosswinds" is about to make contact with the hull of the "Hvexdet", the "Hvexdet" glows with a bright, alien energy and launches from the ocean into space. This is what the Chief has been counting on – Ralph will be able to use his advanced mathematical abilities to track the "Hvexdet" back to Hypsis. Distracted by the "Hvexdet"'s unexpected maneuver, the "Crosswinds" strikes an iceberg and begins to sink. Merryweather orders the passengers and crew to abandon ship and they make for the lifeboats. Merryweather and his crew make contact with a rescue ship and head off to rendezvous with it but Valérian and the others stay out on the ocean near the sinking "Crosswinds". Using his communicator, Valérian calls Lord Seal who, using the spatio-temporal jump, brings Valérian and Laureline's astroship to hover just above their lifeboat. Boarding the astroship, they take off in pursuit of the "Hvexdet".

The "Hvexdet" careers through space-time, making seemingly random jumps, pursued, thanks to Ralph's abilities, by the astroship. Valérian proposes that they use Ralph's abilities to their greatest extent by putting him into direct phase with the astroship itself and attempting to predict where the "Hvexdet" will jump to before it can make the jump itself. With Ralph plugged in they make a series of jumps all in quick succession. Just as they are about to make the final jump to Hypsis, the Chief is assailed with doubt as to whether they are doing the right thing while Valérian is tortured once more by visions of Galaxity disappearing. Laureline, for her part, does not come from Galaxity and, fed up with their indecision, activates the jump herself and they emerge suddenly on Hypsis. The "Hvexdet" is ahead of them and it crashes at the foot of an immense tower.

Bringing the astroship into land, Valérian and Laureline make for the wreckage of the "Hvexdet". Examining the ship, which appears to have been crewed by s, they find the hold loaded with nuclear charges – enough to cause the catastrophe that melted the icecaps in 1986. The intervention by the passengers and crew of the "Crosswinds" means that the catastrophe will not now take place. Exploring the nearby tower, they are stopped by two sentries who tell them that only those summoned for non payment of taxes are allowed into the tower. The "Hvexdet" does not belong to the tower it crashed beside. A spot of negotiation by the Shingouz eventually yields the location of the tower that sent it. Gathering up the others, the party head for the tower.

Arriving at the location they were given, they are surprised to find the tower is run down and neglected. Reaching the top, they are greeted by the three Lords of Hypsis who are behind the "Hvexdet" and the sabotage of Earth's nuclear defence capability. They include a huge man dressed in a trilby hat and in the manner of a gruff detective from a "", his son and a talking which the first man is always hitting.

It dawns on Albert and Lord Seal that these strange people are in fact the – the of , the Son and the .

God explains that his family has owned the Earth since its creation and has been intervening in its development, hoping to bring it forward to a point where it can return wealth to Hypsis. Other planets are owned by the other towers. The Hypsis have returned to Earth again – in the 20th century in the form of the devices that have sabotaged the Earth's defences and in the 28th century in the form of a small silver ball given to the Chief by one of his spatio-temporal agents. This has wiped out Galaxity. The Trinity have had to wipe out Galaxity because of the complaints they are getting from the other towers – Galaxity's imperialist tendencies have impacted on the other worlds that send tribute back to Hypsis. At this point, Albert interrupts, stating that if they proceed with their plan to cause a cataclysm in 1986 they will only precipitate the events that led to Galaxity's foundation. He points out that history is now on a different track. Lord Seal offers to intercede and to arrange for some tribute to revert back to Hypsis, an arrangement that may allow the Trinity to restore their lost prestige. The Chief asks God if he can be returned to Galaxity, even though it has gone. Valérian wishes to go with him, to Laureline's horror. However, the Shingouz, seeing how upset Laureline is, strike a deal with God to keep the astroship for Valérian and Laureline so that they can continue their adventures together.

Some time later, back at Inverloch, Valérian ponders the Galaxity he has lost as he contemplates his astroship, before Laureline prompts him into joining her, Albert and the Seals in a quiet game of .

* Valérian, a spatio-temporal agent from Galaxity, future of Earth, in the
* Laureline, originally from France in the , now a spatio-temporal agent of Galaxity in the 28th century
* Mr Albert, Galaxity's contact in 20th century Earth
* Lord Basil Seal, former Spitfire pilot and chair of the
* Lady Charlotte Seal ("née" MacCullough), wife of Lord Seal and heir to the Clan MacCullough, owners of Inverloch Castle
* The Chief of the Spatio-Temporal Service
* The , a group of three aliens who trade in information
* Ralph, a Glapum'tien, an aquatic species of brilliant s capable of instantaneously calculating the of any object.
* Patrick Fitzgerald Merrywhistle of the "HMS Crosswinds".
* James, to Lord and Lady Seal at Inverloch Castle
* The Trinity of Hypsis – God, the Son and the Holy Spirit

* , year :
** , Inverloch Castle. See entry for "The Ghosts of Inverloch" for more detailed description. Kenchmoor, where Lady Seal goes riding, leads to Kenchmoor Cove where Valérian and the others rendezvous with Commander Merrywhistle of the "Crosswinds".
** The Arctic Ocean. The "Crosswinds" finds the "Hvexdet" close to .
* The Climphus Cluster. A dense where the "Hvexdet" attempts to shake off Valérian's pursuit.
* The planet Hypsis. This mysterious planet moves from location to location at random, making hard to find. At the time that Valérian and Laureline reach it is acting as the fourth moon of the Anoubil, a planet in Zuben-El-Akrab, a star in the constellation of Libra. The sky is coloured orange and the ground is rocky but fertile. The Lords of Hypsis live in great towers dotted around the surface. They are visited by people brining tribute from the worlds they own. The Lords who own the Solar System live in a rusting and crumbling tower perched on top of a finger of rock.

* This was the last Valérian story to be serialised in "" magazine.
* This is one of the most important albums in the series – with new Valérian stories still being published by the mid 1980s, Mézières and Christin had to find a way to reconcile the real 1986 with the fictional one they had first depicted in 1968 in "The City of the Moving Waters" in which the world had been ravaged by a nuclear accident at the North Pole that had destroyed most of the world's cities. By having Valérian prevent the accident from happening, his home, Galaxity, is wiped from the timeline in a changing the basic framework of the series – with no home to return to and no Galaxity to issue them with orders, Valérian and Laureline have to resort to acting as freelance agents offering their services to whoever can pay them.
* This album brings to a conclusion the plot thread set up in "" and "" that Galaxity, far from being the benign it claims to be, is in fact corrupt and imperialistic.
* God's appearance is based on that of Harry Quinlan, the character played by in the film "".