The National AIDS Memorial Grove (The Grove) in Golden Gate Park, San Francisco, California, is a dedicated space in the national landscape where millions of Americans touched directly or indirectly by AIDS can gather to heal, hope, and remember. The mission of the Grove is to provide a healing sanctuary and to promote learning and understanding of the human tragedy of the AIDS pandemic.

The idea for the AIDS memorial was conceived in 1988 by a small group of San Francisco residents representing a community devastated by the AIDS epidemic, but with no positive way to express their collective grief. They envisioned a serene place where people would come alone or in groups to hold memorial services, to remember among the rhododendrons and redwoods. As news of the Grove initiative grew, so did support and interest.

The group selected as the site for the Grove the de Laveaga Dell in world-renowned Golden Gate Park. Due to park budget cuts and lack of funding, the Dell had fallen into a state of disrepair, overgrown and unusable by the public. A team of prominent architects, landscape architects, and designers volunteered countless hours to create a landscape plan that would be fitting as a timeless living memorial.

Site renovation began in September 1991, and is still in progress. The Grove is an award-winning example of civic beautification, combining both public and private sectors in urban-park restoration and promoting AIDS awareness. The Grove’s board of directors obtained a 99-year renewable lease with the City of San Francisco to create and maintain the Grove. Public officials praise the project as the perfect example of a public-private partnership. The Grove has become a model project for like-minded groups throughout the world.

In October 1996, a historic milestone was reached when Congress and the President of the United States approved legislation that included the designation of the site as the National AIDS Memorial, giving it a status comparable with the Vietnam Veterans Memorial, Mount Rushmore, and the USS Arizona at Pearl Harbor. Most memorials are built after the struggle is over. The Grove is becoming the national gathering place even as the 30-year AIDS pandemic continues to invade humanity in unprecedented numbers—and especially as the world commemorates World AIDS Day every December First. 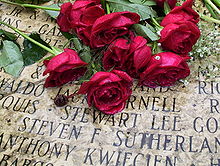 Circle of Friends in the Grove

Community response is the heart of the Grove. During its first decade, the Grove was transformed into a lush and tranquil site visited by thousands of people annually. Since 1991, thousands of citizens have donated more than 100,000 hours participating in monthly Community Volunteer Workdays. Workday volunteers come from all segments of the community and represent a diverse range of racial, economic, cultural, school, religious, and service groups. Under professional supervision, they continue to restore the Grove by clearing overgrowth and reintroducing native species, planting thousands of new trees, plants, and shrubs.

The Grove exists in large measure because of the generous contributions from individuals, philanthropic organizations and corporations. As with most Grove donations to date, funds for the completion of the Grove’s endowment will be raised almost entirely from nongovernmental sources. The Grove’s mission is to promote learning and understanding of the human tragedy of the AIDS pandemic, both to current and future generations. Since its founding more than twenty years ago, the Grove by its very nature has served as a hands-on classroom for HIV/AIDS awareness and environmental education. Part of the Grove’s story incorporates how San Francisco responded to the AIDS crisis by creating what is now known worldwide as the “San Francisco Model.” This model was in part based on common sense, in part driven by desperation, but always fueled by creative individual activism.

By its very existence the Grove transforms stigma into dignity, grief into resolution and death into life. The Grove believes that bringing young and old together with diverse backgrounds, talents and experiences ultimately leads to diverse thinking, new approaches to life challenges and healthier community collaborations. The Grove will always remind future generations that through community activism and compassion one finds a potent antidote to misery and prejudice. The Grove’s youth programming provides important historical lessons which increase youth awareness of HIV/AIDS, while empowering them to take action to improve the communities in which they live.

History of the Grove