The Ogeechee River near Savannah 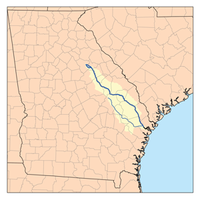 Ogeechee River is a 294-mile-long (473 km)[1] river in the U.S. state of Georgia. It heads at the confluence of its North and South Forks, about 2.5 miles (4.0 km) south-southwest of Crawfordville and flowing generally southeast to Ossabaw Sound about 16 miles (26 km) south of Savannah.[2] Its largest tributary is the Canoochee River. The Ogeechee has a watershed of 5,540 square miles (14,300 km2).

The Ogeechee runs its course from the Piedmont across the fall line and sand hill region then across the coastal plain of Georgia. From a shallow clear running stream with several shoals, rapids, and a small falls at Shoals Georgia, below Louisville the river becomes a lazy meandering channel through beautiful cypress swamps and miles of undeveloped forests.

The origin of the name "Ogeechee" is uncertain, but it might come from a Muskogee term meaning "river of the Uchees", referring to the Yuchi.[3]

Hernando de Soto crossed the Ogeechee between Sandersville and Louisville on April 22, 1541, during his exploration of the southeast part of North America.[citation needed]

Archaeologist and medical doctor George Pilcher with the aid of the Smithsonian dated Native American settlements and burial grounds along the Ogeechee to 8000 BC.

The Ogeechee - A river and its people is a book by the late photographer Jack Leigh. It is the only book that Leigh wrote text for as accompaniment to his photographs. The book features a good deal of geographic information as Leigh traced the river from its source to the ocean. The book is also an intimate exploration of the culture that has evolved along the river's meanders.