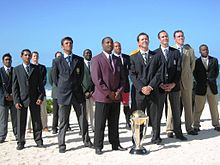 The captains of the 2007 Cricket World Cup.

Here are the number of teams competing in each World Cup next to the year of the World Cup. Note: East Africa played in the 1975 Cricket world cup but no longer exists.

Map of nations' best results after the 2007 Cricket World Cup

So far, 19 teams have competed in the Cricket World Cup finals at least once (excluding qualifying tournaments). Of these, seven teams have taken part in every competition and only five have won. The West Indies won the first two, Australia won four (1987, 1999, 2003 and 2007) and four have been won by South Asian teams (India: 1983 and 2011, Pakistan: 1992, Sri Lanka: 1996). The West Indies and Australia are also the only nations to have won consecutive titles (West Indies: 1975 and 1979; Australia: 1999, 2003 and 2007). Australia have also notably featured in 6 finals of the total 9 World Cups, including the last four in a row. England is the only country to have reached the final without ever winning it, having been runners-up three times. The furthest a non-Test playing nation has ever reached is the semi-finals, achieved by Kenya in the 2003 tournament.

India is the first host country to have won the world cup on the home ground in 2011.The only other host to reach a Final was England in the second tournament in 1979. Sri Lanka and England aside, other co-host nations which achieved or equalled their best finish in World Cups were New Zealand as semi-finalists in 1992, Zimbabwe reaching the Super Six in 2003 and Kenya as semi-finalists in 2003. In 1987, both co-hosting nations, India and Pakistan reached the semi-finals but neither managed to reach the final after losing to Australia and England respectively.

Comprehensive team results of the World Cup. See below for legend.