Man of the tournament

Man of the match

For a long period of time prior to the Cricket World Cup, awards were handed out to players for their performance in each match. These player's were named the Man of the Match. This trend continued into the Cricket World Cup. To receive a Man of the Match award in the final generally meant that one had put up a match-winning performance for their team and, in essence, won their team the World Cup.

The Australians began their chase on track, with brothers Greg Chappell and Ian Chappell taking them to 2/115.[2] However, the Australian innings collapsed when Lloyd ran out Ian Chappell and subsequently took the wicket of Walters. Australia took their score to 274 all out and West Indies won the match. Fittingly, captain Clive Lloyd was named Man of the Match.[2]

Richards bowled 10 overs economically and ended with figures of 0/35 as England began a slow and steady chase to the West Indies' target.[3] However, the English team inexplicably collapsed from 2/183 to 194 all out to give the West Indies the world cup for the second time in a row. Viv Richards was named man of the match.[3]

The 1983 Cricket World Cup final was on a pitch considered very difficult to bat on. The final was between the Indian cricket team and the West Indies. With the West Indies sending India in to bat. India's star batsman Sunil Gavaskar was out early in the innings as India fell to 1 wicket for 2 runs as Mohinder Amarnath came in to bat with Kris Srikkanth.[4] The two managed to combine to form a gritty partnership which ended at 2/59 when Srikkanth fell.[4] Amarnath still remained and took India to 2/90 before losing his wicket. He scored 26 off 80 balls.[4] India were all out for 183, with only three batsmen, one of them Amarnath, crossing the 20-mark.[4]

The West Indies began in similar fashion but a top-order collapse saw them fall to 6/76 through the bowling of Madan Lal and Kapil Dev.[4] However, from there on the pair of Jeff Dujon and Malcolm Marshall combined to take the West Indies past the 100 mark.[4] However, Amarnath came in to bowl and took both their wickets, leaving the West Indies at 8/124, before he trapped Michael Holding leg before wicket to take India to a 43 run victory. Amarnath had innings-best figures of 3/12 and he was commended for his all-round performance with the Man of the Match award.[4]

In the second innings, England ended at 246 with various Australian bowlers, namely Craig McDermott, Steve Waugh, Simon O'Donnell and Allan Border, sharing the wickets.[5] Boon participated in the run out of John Emburey when England were 5/218. Australia won the World Cup and Boon was named Man of the Match.[5]

New Zealand batsman and captain Martin Crowe began the 1992 Cricket World Cup in Australia and New Zealand with a strong 100 not out against Australia.[6] In the next two innings he scored only 5 and 3 respectively, but came back with 74 not out against Zimbabwe and 81 not out against the West Indies.[6] In the remaining group matches, he scored 24, 73 not out and 3 as New Zealand progressed to the Semi-Finals.[6] In the Semi-Final match against Pakistan, Crowe top-scored with 91 off just 83 balls, taking New Zealand from 2/39 to 6/221 as they ended on 7/262. However, it wasn't enough as Pakistan won with one over to spare.[6] Pakistan went on to win the World Cup but Crowe was awarded the first Man of the Tournament because of his exceptional batting performances. He averaged 114.00 and had scored 1 century and 3 fifties.[6]

The 1992 Cricket World Cup final was between Pakistan and England. Pakistan elected to bat first. After the openers failed to make any impact, Javed Miandad and Imran Khan carried the Pakistani innings through to 4/197, when Inzamam-ul-Haq was joined by Wasim Akram at the crease.[7] Inzamam-ul-Haq hit 42 off 35 balls while Akram hit 33 off 19 balls before being run out on the last ball of the innings, taking Pakistan to 6/249 in 50 overs.[7]

England's innings started badly, when Akram dismissed Ian Botham for 0. England drooped to 4/69 before some resistance was provided by Allan Lamb and Neil Fairbrother, who took England to 4/141 and within hope of achieving the target.[7] However, at this point Akram returned to the attack and dismissed Lamb for 31 and the next batsman, Lewis, for 0. England did not recover and were all out for 227.[7] Akram finished with 3/49, his all-round performance earned him Man of the Match.[7]

Batsman Sanath Jayasuriya played in 6 matches in the 1996 Cricket World Cup, of which Sri Lanka won them all.[8] After a score of just 6 against Zimbabwe. Jayasuriya performed better against India, helping Sri Lanka to victory with 79 off 76 balls.[8] He went on to score 44 runs against Kenya and 82 against England. In the semi-final against India, Jayasuriya was out for 1 but contributed with the ball taking the wickets of Sachin Tendulkar and Sanjay Manjrekar.[8] His wickets triggered a collapse which reduced India from 1/98 to 8/120 and took Sri Lanka to the final. Jayasuriya did not perform in the final, he scored just 9 and got 1/43 with the ball.[8]

Although other batsmen, including Sachin Tendulkar who scored a record 523 runs at an average of 87.16, scored more runs than him.[9] Jayasuriya was awarded Man of the Tournament for his aggressive and exciting strokeplay and his match-winning qualities.

The 1996 Cricket World Cup final was between Australia and Sri Lanka. Sri Lanka won the toss and sent in Australia to bat. Australia reached 1/137 in the 27th over with Mark Taylor and Ricky Ponting dominating proceedings.[10] De Silva then came in to bowl and dismissed both Taylor and Ponting, falling to 4/156 before Stuart Law and Steve Waugh stabilized the innings.[10] When they both fell, Australia was at 6/202 with Ian Healy and Michael Bevan at the crease, De Silva bowled out Healy but Bevan persisted, taking Australia to 241.[10]

Australia was forced to bowl in the foggy dew, but still shortened Sri Lanka's chances with quick dismissals of the openers, as Sri Lanka slumped to 2/23.[10] Then De Silva came into the crease and played "on the biggest occasion of his life, played with quite wonderful judgment".[11] He scored 107 from 124 balls, only the 3rd ever century in the World Cup final, and partnered with Asanka Gurusinha and Arjuna Ranatunga, to take Sri Lanka to what ended up an easy victory. De Silva was awarded Man of the Match.[10]

The all-rounder Lance Klusener was part of the South African team in a time in which it was very successful in One Day International cricket. He played 9 matches in the World Cup and almost made it 10 with his final overs cameo against Australia in the semi-final that went in vain as the match was tied.[12] Klusener averaged 140.5 with the bat and 20.58 with the ball in this World Cup.[12]

Klusener opened his World Cup with a win against India in which he took 3/66 and made 12 not out.[12] He continued his form in subsequent matches, scoring 52* and 3/21 against Sri Lanka, 48* and 1/16 against England, 5/21 against Kenya, 52* and 1/36 in a losing cause against Zimbabwe to carry South Africa through to the Super Sixes stage. In the Super Sixes, Klusener failed with the bat for the first time in the Cup, scoring only 4 against New Zealand, but he still took 2/46 with the ball.[12] He scored 46* and took 1/41 against Pakistan and scored 36 and 1/53 against Australia in another losing cause. In the World Cup semi-final, Klusener came in when the score was 6/175, with the South Africans required 39 in 5 overs to win.[12] Klusener scored 31 off just 16 balls and brought South Africa to the level of a tie, but then a run out with Allan Donald resulted in the match remaining tied and Australia passed through to the final per past results with Klusener remaining stranded not out.[13]

Klusener had a strike rate of 122, indicative of his quick-paced batting, but his average was higher than even his strike rate.[12] While Rahul Dravid was the leading run-scorer (461) and Shane Warne was the leading wicket taker (20). His all-round performance earned him the man of the series award.

The 1999 Cricket World Cup final was between Australia and Pakistan. Pakistan won the toss and elected to bat first. The openers were out early as Pakistan got to 3/68 at the 20th over.[14] Australian leg spin bowler Shane Warne was brought into the attack and made impact, bowling out Ijaz Ahmed for 22 and having Moin Khan caught behind for 6, reducing Pakistan to 5/91 after 27 overs.[14] Pakistan attempted to rebuild their innings through their long line of all-rounders, but Warne and Paul Reiffel eliminated the threat. Warne got the wickets of captain Wasim Akram and dangerous all-rounder Shahid Afridi. Pakistan were all out for 132 and Warne ended with 4/33.[14]

The target was of no concern to the Australia team, winning by 8 wickets with 29.5 overs in hand, with Adam Gilchrist top scoring with 54.[14] Warne was awarded Man of the Match for his match-winning bowling performance.[14] 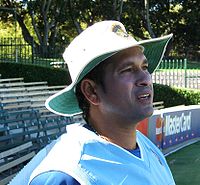 Sachin Tendulkar, Man of the Tournament of the 2003 Cricket World Cup

India was quite successful in the 2003 Cricket World Cup. Apart from making it to the final, they only lost two matches, both to champions Australia. One of the major reasons for this success was the record-breaking performance of "Little Master" Sachin Tendulkar. In 11 innings Tendulkar scored 673 runs at an average of 61.18.[15] He started off his World Cup campaign with a 52 against the Netherlands and a gritty 36 against Australia while all else was collapsing. From that point on in the World Cup, he scored consistently.[15] After an 81 and 152 against Zimbabwe and Namibia respectively, he scored 50 against England and 98 against Pakistan in what was the highest successful run chase in the whole World Cup.[15] He failed to perform against New Zealand and Kenya in the Super Sixes, but scored 97 against Sri Lanka to seal a 180 run victory. He came back in the semi-final against Kenya to score 83. However, in the final, he did not perform, scoring only 4 against a mammoth Australia target.[15]

Out of his 11 innings, Tendulkar was unlucky to only get 1 century.[15] He reached 98 against Pakistan and 97 against Sri Lanka before being dismissed. He also reached the 80s twice. In his 11 World Cup innings, Tendulkar scored 7 50+ scores.[15] Tendulkar remains the record-holder of numerous records in World Cups.[16]

The final of the 2003 Cricket World Cup was between India and Australia. India won the toss and sent Australia in to bat. The Australian openers wreaked havoc on the Indian pace bowlers and only Harbhajan Singh could take wickets. In the 14th over, Adam Gilchrist was dismissed by Singh and Ricky Ponting walked in to bat.[17] Australia was 2-125 in the 20th over when Ponting was joined by Damien Martyn at the crease. Australia achieved 200 in just 35 overs.[17] Martyn and Ponting held a 100 run partnership off just 109 balls.[17] Australia achieved the highest partnership for this ground in ODIs. In the 43rd over Australia achieved 250.[17] Ponting then reached his century which included 5 sixes and Australia quickened the pace, scoring 110 runs in the next seven overs at 15.7 runs per over. Ponting scored 140, the highest in a World Cup final and Martyn scored 88, his highest against India.[17]

India's start was not so dominating, Sachin Tendulkar being dismissed for just 4.[17] India fell to 3/59 before Rahul Dravid and Virender Sehwag combined to take the total to 3/147. India reached 234 before they were all out in the 38th over. Ponting, Australia's captain, was awarded Man of the Match.[17]