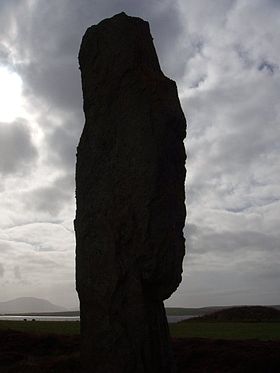 One of 60 standing stones from the Ring of Brodgar located in Stenness, Orkney.

Standing stones, orthostats, liths, or more commonly megaliths (because of their large and cumbersome size) are solitary stones set vertically in the ground and come in many different varieties.

Standing stones are usually difficult to date, but pottery found underneath some in Atlantic Europe connects them with the Beaker people; others in the region appear to be earlier or later however.

Where they appear in groups together, often in a circular, oval, henge or horseshoe formation, they are sometimes called megalithic monuments. These are sites [it is thought] of ancient religious ceremonies, sometimes containing burial chambers.[1]