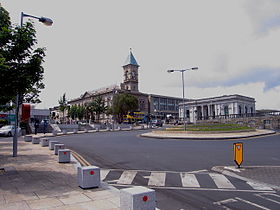 The corporation was formed by Section 3 of the Local Government Act (Dublin) 1930 from the four Urban Districts of Dún Laoghaire (until 1920 Kingstown), Blackrock, Dalkey, and Killiney & Ballybrack. The merged area was named the Borough of Dún Laoghaire. Plans to merge these coastal authorities were first made in 1903, a bill to effect this was being drawn up in 1924, but this was abandoned when the Government of Ireland proposed their own legislation to reorganise local government in County Dublin.

In 1994 the Corporation was merged with part of the Dublin County Council to form the Dún Laoghaire - Rathdown administrative county. The Dún Laoghaire Vocational Education Committee, originally created for the Borough of Dún Laoghaire, remains in existence.