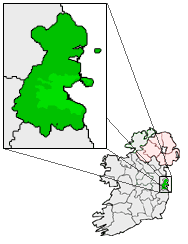 Blackrock ( _ga. An Charraig Dhubh) is a suburban town and district located south of the city of , in Dun Laoghaire-Rathdown County, , km to mi | 3 | abbr=yes | precision=1 northwest of .

It has a large area, rising from sea level on the coast to 90m at "White's Cross" on the N11. The town has a range of industries, notably in the IT and service areas.

There are many places of historical significance within the area. The childhood home of Lord Edward FitzGerald, , was here until 1983, when it was demolished as part of the completion of Roches Stores' new shopping centre. [ [http://www.unison.ie/irish_independent/stories.php3?ca=9&si=1668919&issue_id=14484 Roches sale puts reclusive retail dynasty in limelight for last time - National News, Frontpage - Independent.ie ] ] The Cross Avenue was the site of the assassination of , and was also where lived after his Presidential term ended. Linden Convalescent Home, where President de Valera died, is also in Blackrock but is now an apartment complex although the original building is still intact. The writer lived in a house known as Leoville on Carysfort Avenue for one year in the early 1890s. This house is still extant. The writer lived at 4 Avoca Terrace and later at 81 Merrion Avenue. Both houses are still extant.

The primary schools in the area include Carysfort N.S., Guardian Angels N.S., Willow Park (at Blackrock College), St. Augustine's, All Saints and Our Lady of Mercy N.S.

was a large teacher training college located in the area, until its closure in 1988 and is now operated as the , part of .

There is also a private clinic, (in the Williamstown locality). This was built on the site of Rosefield House.

The Blackrock baths have fallen into dilapidation since their closure [ [http://www.ciarancuffe.com/PR/2006/PR061019.Blackrock.Baths.Meeting.htm Green Party hosts public meeting on future of Blackrock Baths ] ] and have been sold to developers Treasury Holdings, who have raised the possibility of building high-rise apartments on the site.

Blackrock is home to the Ian Davis School of learning set up in the late 1980’s to help under privileged youths with foreign language studies. In 2004, a plaque was dedicated to Ian Davis in the centre of the village.

*Blackrock has a station on the (DART) line, which is 15 minutes away from the city centre, and runs on the track that was built in 1834 as the Dublin-Kingstown railway. opened on . [cite web | title=Blackrock station | work=Railscot - Irish Railways | url=http://www.railscot.co.uk/Ireland/Irish_railways.pdf | accessdate=2007-08-31] also serves the area with multiple bus routes.

*Rock Road was once directly beside the sea, and the railway line was built about 50 metres from the coast, giving the impression that the trains were running on water. However, the intervening area soon became marshland and the area between Williamstown and Blackrock became Blackrock Park.

*More recently, in the 1980s, the Blackrock bypass, part of the N31 which joins the ferry port at Dún Laoghaire to the national Primary Route network was built.