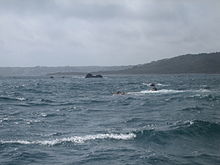 The Manacles are a set of treacherous rocks off The Lizard peninsula in Cornwall close to Porthoustock, which is a popular spot for diving due to the shipwrecks around them. The name derives from the Cornish (men eglos) for 'church stone', the top of St Keverne church being visible from the area.

The rocks extend about 1 nautical mile east and south east of Manacle Point.[1] They consist of many submerged rocks and several groups of rocks that break the surface, although some only do so at low water. The Middle Manacles in the north consist of Maen Chynoweth (or Morah), Chyronos, Maen Gerrick and the Gwinges, the eastern group has Vase Rock and Pen Vin, the large group in the centre include the Minstrel Rock, Carn-dhu, Maen Voes (the Voices) and the Quants and Maen Land is in the south-west.

Many of the well-known wrecks are in the central group where depths are less than 6 metres for an area of 300 metres by 200 metres. These wrecks include: