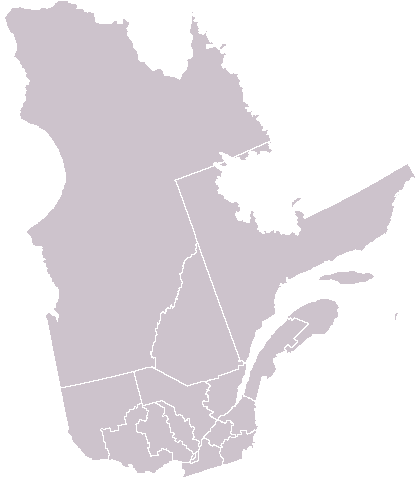 The town of Stanstead was created in 1995 by the merger of the former towns of Stanstead Plain, Rock Island and Beebe Plain.

It is the home of the "", an weekly founded in 1845, as well as . Another notable landmark is Centenary United Church.

The runs through the town of Stanstead, dividing the U.S./Canadian border at times. Along portions of Canada's Rue Canusa, houses on the southern end of the street lay entirely within Vermont, while their driveways direct northward, and connect to the street in Quebec, as the northern portions of their properties are within Canada. These residents' backyard neighbours are American, while families living right across the street are Canadian, though no noticeable boundary exists between the two (the street itself is entirely within Canada). In other places, the international border runs through individual homes, so that meals prepared in one country are eaten in the other. An entire tool-and-die factory, once operated by the Butterfield division of , is also divided in two by the border.

Stanstead Plain was founded in 1796 by Johnson Taplin, who came from in search of good farming land. The town blossomed in the 19th century, due to the influx of and the development of the industry. In 1855, the village was incorporated by the Quebec legislature. The town was the main center of commerce of the region through the late 18th century, losing preeminence to Sherbrooke. Stanstead was also at one time the seat of the former Stanstead County, situated North of Derby Line, Vermont.

Rock Island was settled in 1798 by Samuel and Selah Pomroy from Massachusetts. In 1802, a bridge was built across the Tomifobia River to ease access to Derby Line. The following year, Col. Charles Kilborn built a saw mill and a corn mill, then set up a dam on the river to feed them. A few years later, a channel was dug in the bend of the river. The territory located between the channel and the river was named Rock Island.

Rock Island is known for the , deliberately constructed on the international border and opened in 1904. The original owners were a couple with dual nationality; Mr. Carlos F. Haskell was an American businessman from Derby Line who owned a number of sawmills, while Mrs. Haskell was born in Canada. The intent was that people on both sides of the border would have use of the facility, which is now a designated historic site.

Another famous native of Rock Island is Henrietta Banting (1912-1976), the wife of Frederick Banting, co-discoverer of insulin in 1922. The Bantings donated some land to the town, and the municipal authorities recognized them by naming a public park in their honor in 1981.

It is also the home of the Dairy Association Company, the manufacturers of . [cite web|url=http://www.tomifobia.com/bagbalm/our_story.html|accessdate=2007-07-29|title=The Bag Balm Story|first=John|last=Mahoney|date=2000-01-10] [This is different from the manufacturers of the product located in ]

Beebe Plain was colonized about 1789 by Zeeba Beebe of Connecticut. A saw mill was established as the town’s first business in 1863. By 1869, Beebe Plain had a church, two stores, a post office, a customs post and some houses. The village separated from the Canton of Stanstead and became a separate municipality. From 1874 to 1935, a -style holiday resort, including a meeting hall, a dining room and about thirty country cottages, attracted thousands of people, mainly Americans from New York and Boston. The granite industry is the major force in the area’s economic history.