Cynognathus crateronotus was a meter-long predator of the Early to Middle Triassic. It was among the more mammal-like of the Synapsids, a member of a grouping called Eucynodontia. The genus Cynognathus had an almost worldwide distribution. Fossils have so far been recovered from South Africa, South America, China and Antarctica.

The genus Cynognathus (from Greek κυνόγναθος, meaning "dog jaw") has been given several different names over the years. It has also been known as Cistecynodon, Cynidiognathus, Cynogomphius, Karoomys, Lycaenognathus, Lycochampsa, Lycognathus, and Nythosaurus. In addition, according to the records of the Peabody Museum of Natural History at Yale, Richard Owen used the name Nythosaurus for this animal in 1876. This usage seems to be unconnected with Cynognathus. Cynognathus is presently the only recognized member of family Cynognathidae. Opinions vary as to whether all remains belong to the same species.

The genera Karoomys, Cistecynodon and Nythosaurus are known only from tiny juveniles, while Lycognathus cucullatus seems to be a misidentified snake from the Balearic Islands, although confirmation is elusive. 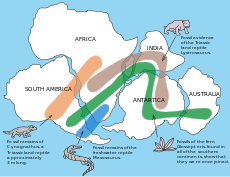 Fossils have been found in Karoo; the Puesto Viejo Formation; Fremouw Formation, in South Africa/Lesotho; Argentina; Antarctica; and China

Cynognathus lived between the Spathian (Lower Triassic) and the Anisian (Middle Triassic).

Cynognathus was a heavily built animal, and measured around 1 metre (3.3 ft) in body length. It had a particularly large head, 30 centimetres (1.0 ft) in length, with wide jaws and sharp teeth. Its hind limbs were placed directly beneath the body, as in mammals, but the fore-limbs sprawled outwards in a reptilian fashion.[1]

The dentary was equipped with differentiated teeth that show this animal could effectively process its food before swallowing. The presence of a secondary palate in the mouth indicates that Cynognathus would have been able to breathe and swallow simultaneously.

The lack of ribs in the stomach region suggests the presence of an efficient diaphragm: an important muscle for mammalian breathing. Pits and canals on the bone of the snout indicate concentrations of nerves and blood vessels. In mammals, such structures allow hairs (whiskers) to be used as sensory organs.