Monterotondo is a town and comune in the Province of Rome, central Italy.

According to some historians, Monterotondo is the heir of ancient Sabine town of Eretum, although the modern settlement appeared in the 10th-11th centuries in a different location. The name derives from the medieval corruption (then Mons Teres, then Monte Ritondo) of the original Mons Eretum.

In the Middle Ages, due to its location across the Via Salaria, Monterotondo was a strategic point for the defense of Rome. Initially under the Capocci family, it was sold in the 12th century to the Orsini, who held it until the 18th century. In 1432 it was seized by the condottiero Niccolò Fortebraccio, and in 1485 it was set on fire by the Orsini.

In 1634 the Barberini acquired the town, restoring or enlarging several edifices, and building the Cathedral (1639). On 28 April 1864 the Rome and Monterotondo Rail Road was opened for service.

In 1943, after the Italian armistice with the Allies, 800 German paratroopers tried unsuccessfully to reconquer it. 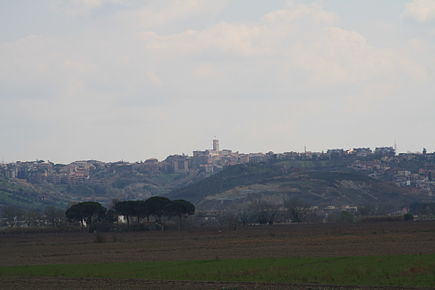