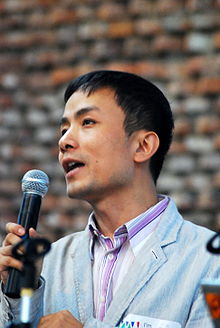 Born in Nanjing, Michael Anti became famous when Microsoft deleted his blog at the end of 2005. His case made headlines around the world and contributed to ongoing debates about the role of Western companies in China's censorship system. Michael Anti himself, while angry at the deletion of his blog, argued that the Chinese are better off with Windows Live Spaces than without it.[1]

Michael Anti has broad experience with both American and Chinese journalism. He worked as a researcher at The New York Times Beijing bureau. He graduated from Nanjing Normal University in 1995 where he majored in Industrial Electrical Automation, but turned to newspapers in 2001. He has been a commentator for the Huaxia Times,[2] correspondent of the 21st Century World Herald, war reporter in Baghdad in 2003, researcher at The Washington Post Beijing Bureau, columnist for the Southern Metropolis Daily, and publisher of the Far and Wide Journal.[3] He is a recipient of a Wolfson press fellowship at Cambridge University and Nieman Fellowship at Harvard University.

He delivered a seminar in Journalism and Media Studies Centre, The University of Hong Kong, on 12 April 2007, in which he talked about the ways to survive as a journalist in China by introducing two concepts of news reporting: Propaganda and Professionalism.

In the seminar, he suggested that propaganda is the way used by Chinese journalists nowadays, which lead to the "death" of journalism in the country. He pointed out the only way of "saving" the dead journalism in China is to promote Professionalism by setting up journalistic NGOs and/or professional communities with the cooperation among Universities.

Most recently, he worked as project director in "Cheung Kong School of Journalism and Communication" of Shantou University from September 2008 to March 2009, but his journalistic education work could be traced to 2002, when he wrote the famous web post ""Manual for New Journalists""(Chinese).