Creepy was an American horror-comics magazine launched by Warren Publishing in 1964. Like Mad, it was a black-and-white newsstand publication in a magazine format and thus did not require the approval or seal of the Comics Code Authority. The anthology magazine was initially published quarterly but later went bimonthly. Each issue's stories were introduced by the host character, Uncle Creepy. Its sister publications were Eerie and Vampirella.[1]

Russ Jones, the founding editor of Creepy in 1964, detailed the magazine's origins and his lengthy negotiations with Warren in his memoir, "Creepy & Eerie," at his website.[1] While doing covers, illustrated stories and photo stories for Warren, Jones continued to pitch the idea of doing a comics magazine, and eventually Warren agreed:

Originally it was to be a 64-page magazine. Jim cut it back to 48... I made a sketch of my host for the mag and sent it off to Jack Davis to work up a cover. Still no title. Titles are tough. Ask anyone who ever had to come up with one. One night I was sitting in the studio alone, looking at Woody's tear-sheets from the ECs, when Warren called. He was furious and demanded a name for Project D. I was looking at a balloon over an Ingels Old Witch, and in her narrative, the word "creepy" grabbed out at me. I muttered the name to Jim... We now had a title for our mag.[1]

This publication and later companion "Eerie", were seen as largely inspired by legendary E.C. Comics' storied line of horror and suspense publications- from story content, to host storyteller "Uncle Creepy" filling the role of EC's own Crypt Keeper, et al, to Warren's use of many former EC artists. Indeed, the EC "tone" for Warren was furthered with the addition of "Blazing Combat"- a gritty war comic that from art/artists to realistic and darker story lines mimicked EC's own previous war books- "Two-Fisted Tales" and "Frontline Combat". On those merits alone, the earlier efforts of the Warren line were relatively well regarded by the small cadre of organized comics fandom of the era.

Russ Jones soon departed, and in 1965, Archie Goodwin became the editor of Creepy. Goodwin, who became one of comics' foremost and most influential writers, helped to establish the company as a major force in its field.[1]

Goodwin resigned as the editor of Creepy after issue 17 (October 1967). Due to a lack of funds, the majority of the magazine's leading artists left, and Warren was forced to rely on reprints, which would be prevalent in the magazine until issue 32 in April 1970. A variety of editors ran the magazine during this period, including Bill Parente, Nicola Cuti and Warren himself. Things would pick up starting in 1969 with the premiere of Vampirella magazine. Some of Creepy's original artists, including Frazetta, Crandall and Wood, would return, as did Goodwin, who was associate editor for issues 35 through 39.

A variety of editors continued to manage Creepy after Goodwin's second departure, including Billy Graham and J. R. Cochran. William Dubay, who had started at Warren as an artist with issue 32 in 1970 would become editor of the magazine for issues 50 through 78, except for a short period of time in 1974 where Goodwin returned for issues 61 through 64. During this period the frequency of Creepy and Warren's other magazines was upped to nine issues per year.

Themed specials dominated Dubay's era as editor, and included two Edgar Allan Poe issues (69 and 70), three Christmas issues (59, 68 and 77), three issues dedicated to a single artist (71, 72 and 74), a science fiction issue (73) and an issue where every story was based on the cover painting (64). This era also featured stories that were printed in color, many of which were done by Richard Corben. Towards the end of his period as editor, many artists from Creepy's first golden era returned, including Alex Toth and John Severin.

Dubay resigned after issue 78 and was replaced by Louise Jones, his former assistant. Jones would edit the magazine until issue 116 in March 1980. Former DC Comics publisher Carmine Infantino joined Warren shortly after she became editor and did pencils for over 50 stories. Much like the wave of Spanish artists that dominated Creepy throughout the mid-1970s, a number of artists from the Philippines joined Warren during her period as editor, including Alex Niño, Alfredo Alcala and Rudy Nebres, remaining with Creepy until its end in 1983. While he had resigned as editor, Dubay remained with Warren and became their dominant writer during this period. Other dominant writers during this period included Bruce Jones, Bob Toomey, and Roger McKenzie.

After Louise Jones resigned as editor following issue 116, Dubay returned to edit the magazine using the alias "Will Richardson" until issue 126. After Dubay's departure, various editors including Chris Adames and Timothy Moriarty held the position. Reprints would once again start predominantly appearing in the magazine, with many reprint issues being dedicated to a single artist. Jim Warren's last Creepy (#145) was published February 1983, and then he went bankrupt. Harris Publications bought rights after Warren's bankruptcy and published a single issue (#146) in 1985.

In 2000, after a protracted legal dispute with Harris Publications,[2][3] Jim Warren and Warren Publishing finally regained sole ownership of all rights to his two iconic and flagship comic book franchises Creepy and Eerie.

Archives and the relaunch 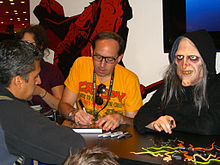 Editor Dan Braun signs a collected edition of Creepy next to a model dressed as Uncle Creepy at the Dark Horse Comics booth at the 2011 New York Comic Con.

In February 2007, New Comic Company, LLC completed a total rights acquisition from Warren and his entity for all rights to Creepy and Eerie, after seven years of effort. Terms of the deal were never disclosed. All copyright renewals and trademarks have been re-established in the name of New Comic Company LLC.[citation needed]

Uncle Creepy is mentioned in an early scene in Percy Jackson & the Olympians: The Lightning Thief.